Despite the fact that this wine has been on the market for quite some times now, I thought that it will be a good idea to talk about it and put it back in your mind.

2001 Bodegas Estefania "Tilenus" Pagos de Posada Mencia Bierzo Spain
Suggested retail price $42-46
Distributed / Imported by  Ibanez Pleven in NYC
The winery Bodegas Estefania is located in Bierzo, between the village of Dehesas and Posada del Bierzo, roughly 6 km west of the main town Ponferrada.
Situated west of Rias Biaxas, less than 100 km from the northeastern corner of Portugal (northwestern part of Spain), Bierzo is a wine region, part of the province of Leon (Castilla y Leon), which has been officially recognized as a DO (Denominacion de Origen) in 1989.
Nestled in the middle of a mountainous area, Bierzo benefits from a special climate and diverse micro-climates influenced by three important factors: the high altitude with steep slopes; the proximity with the humid, oceanic climate of Galicia and on the other side the proximity with hot, dry climate of Castilla. These factors complement each other and create an ideal climate with enough rain fall and hours of sunshine per year for growing healthy robust vines and achieve great ripeness.
The mountain soils consist of a few feet of humid, dark earth on top of layers of quartz, schist and slates of the Licorella type (similar to the Priorat region). It is the perfect soil and climate to enable the indigenous red grape variety "Mencia" to flourish and ripen evenly on these high altitudes, somewhat cool climate, steep slopes planted vineyards.
Mencia represents 70% of the red grape planted in Bierzo and taste a bit like a Cabernet Franc. It seems to have some of the same aromas and flavors characteristics. Some vineyards are between 50 to 100 years old. Nearly forgotten and practically instinct until the 70's, a few producers revived it and in the same time put Bierzo back on the map.
Bierzo produces mainly red wines predominantly with the Mencia grape and a bit with Garnacha Tintorera too. It also produces some white made with the Galician grape Dona Blanca, Godello and Palomino, and sold more locally some rose.
Fairly unknown with only a few labels available in the US market, the red wines of Bierzo gained a bit more recognition over the last few years and Tilenus surely helped to convince consumers of the high quality of this appellation. Bierzo wine prices range from low $10 up to $60+, the former tend to be light, smooth, well rounded and the later are complex, rich, earthy, with a good tannic structure and balance which confer them ageing potential.
Bodegas Estefania produces some of the most sought-after wines in the area, mainly as a result of their spectacular vine holdings that have been in the family for many years. these holdings include 36 hectares of vineyards, the majority of which are over 70 years old, and are planted on pure schist. Despite the richness and the complexity brought by the age of their Mencia vines, they still have to lower the yield and need to harvest at full ripeness to avoid the green notes, hints of bitterness and high acidity (which are some of the particularities of the grape).
2001 Bodegas Estefania "Tilenus" Pagos de Posada Mencia Bierzo is a medium bodied yet rich and well rounded wine with good acidity and ripe raspberry notes, great for Fall season. It was produced with grapes from 80-100 years old vines. The fermentation occurred partly in stainless steel tanks and partly in oak barrels. It was then aged for 18 months in 70% new French oak barrels, and 30% older barrels.
On the nose, fragrant aromas of raspberry, cherry fruit and red currant intermingled with hints of black pepper, spice and floral notes. The palate, somewhat rustic and earthy yet enjoyable and balanced, exposes great minerality as well as soft tannins and touches of bitter chocolate and mocha. It combines the structure of a Cabernet Franc, the soft, bright texture of a Pinot Noir and some of the spicy character of a Syrah.
It will be ideal with a rack of lamb cooked with herbs and garlic and served with wild mushrooms and green beans.
Enjoy!
LeDom (du Vin)
Info partly taken from  www.europeancellars.com , www.ipowine.com and www.bodegasestefania.com (see also www.tilenus.com)
Posted by LeDomduVin at 8:24 PM No comments:

Email ThisBlogThis!Share to TwitterShare to FacebookShare to Pinterest
Labels: Bierzo, LeDom's Selection of the Month, Spain

Hi everybody,
About 2 years ago, I went to Ribera del Duero (like I use to do every year in my previous job) to visit many wineries and taste wines at the barrel from the newest vintage and re-taste some of the newly bottled wines from the previous year and older vintages.
Amongst many other wineries visited over 2 or 3 days, I went to Bodegas J.C. Conde, Delgado y otras. Javier Ajenjo received me and my colleagues and gave us a little tour of what was, at that time, still a work-in-progress winery.
Bodegas J.C. Conde is somewhat a fairly new project founded in the late 90's by Julio Cesar Conde, Javier Ajenjo and Jose Luis Simon.
The vineyard-driven project was started without a vineyard by this small group of friends with 3 goals in mind: respecting the region traditions, aiming for high quality rather than quantity and producing great Ribera del Duero wines by searching the essence of wine.
They aim to produce wines with a balanced harmony between the ripe fruit aromas and flavors for early consumption and the oak influence for good ageing potential and structure.
The first few vintages were made out of purchased grapes and farmed grapes from local 50 years+ old vines. They slowly bought some vineyards and built a winery with the suggestions and winemaking expert knowledge of their winemaker, Isaac Fernandez, former cellar-master of Vega Sicilia.
Isaac's philosophy is:
"I try to make wines of the highest possible quality based on each year and look to be able to offer them to the world with reasonable and competitive prices. I try to respect to the maximum the identity of the vineyards and of the grapes with which I work, despite this is not an impediment to be able to develop my wines and to equip them with an elegance that differentiates them from the rest." Isaac Fernandez 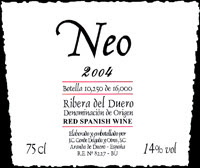 Quite a few months later, Javier Ajenjo gave us a surprise gift for supporting his wines, to each of us, a bottle of Neo 2004 with our name on the label. It was very nice of him and I'm hoping to go back to the winery within the next few years.
2004 Bodegas J.C. Conde "Neo" Ribera del Duero Spain
Suggested retail price $55-$60
Distributed / Imported by Grapes of Spain in NYC (see also Aurelio Cabestrero)
Production: Produced from 50-60 years old vines planted in clay-limestone soils, located near the village of la Horra, this wine is a great example of the quality and the density that can be achieved in Ribera. Coming from vineyards managed with a specific intent to produce low yields of ripe, healthy fruit, the Tinto Fino or Tinto del Pais grapes (a synonym for Tempranillo in Ribera) were sorted and destemmed before being macerated-fermented for 20 days. The wine was then aged for 15 months in 80% French and 20% American new oak barrels (medium-plus toasted). It was finally bottled without fining, clarification or filtration. They produce about 16,000 bottles of this great 2004 vintage.
Tasting Note: I made a terrible mistake, 2004 Neo wasn't meant to be open two years after bottling. It was definitely long enough for this wine to really express itself. I decanted it twice and left it to rest for about 2 hours in the decanter before trying to drink it over the dinner.
The robe was really sombre. At first, the nose was a bit closed and discreetly delivered aromas of "opaque" dark fruit, earth, smokiness and hints of alcohol. The palate was very rich, opulent and dense yet tight and tannic with dark ripe fruit, earth, garrigues and smokiness. Even the finish seemed strong, oaky, and alcoholic. So we left the wine to rest in the closed decanter until the next night. My wife and I found it much better, open and in better condition than the previous day, but still tight.
Time will tell for this wine. It is way too soon to open it and really enjoy it. It needs to settle down and relax. Let's hope that time will tame this dark beast and that within the next 3-5 years, the tannins and the alcohol will be more integrated and in harmony with the fruit.
The wine was a real expressive, powerful and structured fruit bomb at the winery when we visited it. Maybe the wine just entered a sleeping phase and will reopen within the next few months or years. We will see.
Enjoy! (but not now!)
LeDom (du Vin)
Info partly taken from: www.grapesofspain.com and www.bodegasconde.es
Posted by LeDomduVin at 10:49 PM No comments:

Posted by LeDomduVin at 7:43 PM No comments: