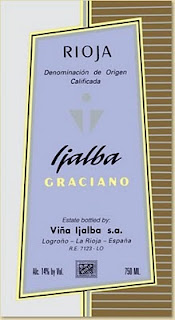 Bodegas Viña Ijalba Graciano Rioja Spain
On one of my previous post on introducing "CVNE Contino" (see my post of Sat. 03.28.09), I was talking about the fact that Graciano, which usually constitutes a minimal part of the blend with Mazuelo (also known as Carignan in France and Cariñena in Spain) in Rioja's wines, only complements Tempranillo to add color and aromas and part of the structure and texture.

Graciano is a late budding grape variety, with naturally low yield, that necessitates longer ripening season than Tempranillo and is usually rarely bottled on its own. Yet, quite a few property now possesses some old vines Graciano and the wine that this grape produces is characterized by its deep red color, strong earthy aromas and ability to age well, but only few are the wineries daring to bottle Graciano. Along with Contino led by skillful winemaker Jesus Madrazo, Bodegas Viña Ijalba is one of these few adventurous estates setting the example and the trend.

Viña Ijalba was founded in 1975 by Dionisio Ruiz Ijalba, with the planting of the first vineyard of Villamediana de Irega (near Logroño). Since then, the vines of Viña Ijalba have been cultivated strictly in accordance with traditional Rioja rules and, more importantly, organic methods: high density, in infertile and shallow soils, no use of chemical fertilizers (only dung), no irrigation during the growing cycle, and no use of insecticides or pesticides.

The entire vineyard is planted on abandoned opencast mines, which have been restored from an environmental point of view, having received several national and European prizes for the restoration undergone. As a consequence of the location of the vineyard, the soils are poor and limy, with little depth. The vineyards are planted on the sites of ancient quarries, which have poor rocky soils. Thus, the vine's roots have to grow very deep to find water and nourishment.

Viña Ijalba, which is also one of Rioja's leading Organic wineries, produces all of its wines under organic methods and processes. The wines of Bodegas Viña Ijalba, are the result of vineyards (viñedos) planted traditionally with the best bio-organic techniques. This fairly new bodega uses modern technology, and a totally original philosophy of wine making. The actual Bodega and cellar was constructed north of Logroño in 1991.

Viña Ijalba owns 70 Hectares (175 acres) of vineyards which are in a number of parcels surrounding Logroño, in San Vicente de la Sonsierra, and Valle del Najerilla. These vineyards supply 100 % of the production of the bodega. The grapes planted have been matched to the soil type and micro-climate of each vineyard site.

Ijalba Graciano's vinification: fermentation of the crushed and pressed grapes occurred in stainless steel tanks at a constant temperature of 25°C. The wine was then stabilized at low temperature, and lightly filtered, and was aged in oak for aproximately 12 months before bottling.

At first, this wine strikes you with its deep red-lilac-garnet color, somewhat unusual purple with timid brick reflects on the rim. On the nose, intense aromas of ripe figs and dark wild berries mingled with underbrush, slightly mushroomy, earthy notes (in a good intriguing way). The palate is fairly intense too and Terroir oriented. Rich and well balanced with great acidity and somewhat raw textured, the wine is fruity, earthy, medium to full-bodied, may be esoteric for some yet well crafted, soft and inviting with present yet nicely integrated chewy tannins. Definitely a food friendly wine, ready to drink now after a bit of aeration yet showing some good ageing potential.

From the importer's point of view, it goes well with strong, heavy and spicy meals, red meat, venison (hare, boar, stag), but as well with fish like sea bream, tuna or cod (grilled or with a sauce) and all typed of risotto.

FYI: we also have the 2005 vintage at the store, which is also a very good wine, somehow less austere yet, in my opinion, not fully ready to drink now and somehow less open than the 2004 for the moment due to some tannins that will need a bit more time to settle down. Despite this last comments, I also love the 2005 Viña Ijalba Graciano. By the way, the label of the 2005 vintage is quite different from the one of the 2004 vintage, it has been revamped.

Step into the Green! Drink more Biodynamic and Organic wine (and food) from sustainable culture and respect the environment! Support the right causes for the Planet and all the people suffering all around the globe!
Posted by LeDomduVin at 7:53 PM