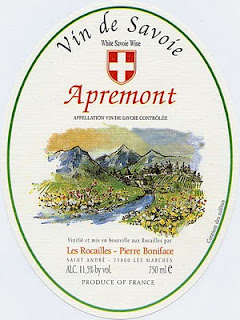 Ok, let’s face it; it is another post about Savoie. Unbelievable, summer is here, and all I can write about is Savoie, Savoie and more Savoie. But you know what? Why not?

After all, it comes “très á propos” in my quest of always trying to introduce you to lesser-known regions, grapes and wines from around the world crafted by small artisanal producers and family owned estates.

Granted, after reading my last 3-4 posts about Savoie wines, you must be extremely knowledgeable and on the verge of getting annoyed or bored. But what can I do, these wines are great! And the Savoie region remains so undiscovered for so many people. I just want to talk and write about it.

After writing about great producers like Eugène Carrel et Fils, Andrien Berlioz, Gilles Berlioz, a few of the Quénard (and God only knows how many they can be within this huge family, at least 6 different that I know of), Thierry Tissot, and René & Beatrice Bernard from Cellier du Palais, I couldn’t write about another wine from another region without writing something about Pierre Boniface, one of the most recognized personality of Savoie and surely one of my favorite Savoie producers.

I bought my first bottles of Pierre Boniface about 10 years ago; it was his Apremont 1999 Cuvee Prestige Les Rocailles. I loved it and somewhat consequently fell in love with Savoie wines. At that time Jacquère, Roussette or Altesse, Bugey, Mondeuse didn’t mean much for me. I had the chance to serve a few of these little gems in the restaurant where I worked as Sommelier 14 years ago, but had only little interest. I was young and naïf, and my palate was more acquainted to wines with more fruit, weight and substance with more oak influence…

I guess it came from my Bordeaux origins and the fact that at that time, Robert Parker Jr. critics were more in favor to heavier wines and were setting the trend. But all of this has changed, more than 18 years of tasting and nearly 14 years of wine buying later, my palate has considerably developed to become the discriminating and dissecting tools that ever since has shaped and ruled my everyday life at work but also at home. Harmony, freshness, minerality, balance, crispiness, varietally correct and Terroir oriented features, rapidly replaced over-ripe, heavy, alcoholic, woody and jammy, in my wine vocabulary.

And somewhat, I was terribly influenced by the wines of the Loire and Burgundy, but I need to admit that the wines from Jura and more especially Savoie startled me the most and enabled me to make that change and sharpened my taste buds.

Pierre Boniface Vin de Savoie France
Pierre Boniface wines are produced at “Les Rocailles”, a “lieu dit” of St. André-les-Marches, a little village nestled in the Savoie Vallée, about 13 kilometers south of Chamberry, in the foothills of French Alps.

Established for centuries in the village of Apremont and its immediate surroundings, the Boniface were always connected to agriculture and viticulture. They were winegrower and Négociant.

Conducting a modest business, Pierre’s father was only farming 20 acres (about 8.10 hectares) and buying grapes from another 20 on handshake deals when Pierre took over.

Gradually, Pierre Boniface grew the business and expanded his vineyards and although not the largest, he became one of the larger estates in the area of Les Marches, and consequently of Savoie.

Les Rocailles now owns nearly 50 acres (about 20 hectares) in Apremont, which provide half of the grapes for his 25,000+ cases annual production of his Apremont, and purchases grapes from nearly 60 more acres (about 24 hectares) under contract with his neighbors. Boniface buys grapes, but never bulk wines; thus, every bottle he produces are fermented and vinified in his cellar and bottled at the property.

The vineyards constitute of about 40 acres Jacquère for Apremont owned, and 40 leased. In addition, the estate owns about 8 acres of Roussette, leases about 15 acres. Atop all that, they also have small acreages of Chardonnay for their Brut, some more Jacquère for their “Abymes”, and some Gamay for the rosé and some Mondeuse for the red. And finally, three acres of Roussanne are leased for the production of Chignin-Bergeron.

Understandably, Apremont is Boniface’ s signature wine. Produced with 100% Jacquère, it accounts for 70% of the production, with a vast majority sold to the export markets. This great value white is the perfect introduction to the unique and distinctive wines of Savoie.

Growers like Pierre usually look forward to passing their domains on to their children, but in this case, it was just not meant to be. His daughter Miriam is a computer systems architect and his son is literally a rocket scientist. Pierre subsequently sold the business to Guillaume Durand and Alban Thouroude, two young men (born and bred in Savoie) with MBA's from the University of Grenoble.

All of the winery/vineyard staff has stayed on, and Pierre will continue to actively consult for the next few years. Yet, even under new management the quality has not decreased, on the contrary, it has evolve and aim for higher ground in complexity. Pierre Boniface has now become a brand, a name expressing quality and Terroir driven attitude, recognized and often praised by the press and the critics.

Pierre Boniface Apremont is made with 100% Jacquère, from vines of more than 40 years of age in average, in both owned and leased vineyards. The yields are of 4.75 tons/acre (about 9 tones per hectares). The wine doesn’t see any oak at all to preserve freshness and fruit quality, and is vinified in temperature controlled stainless steel tanks. Alcohol is usually quite low, usually 11% (or sometime a little less) and rarely above 12.5%. Apremont is often dry but not tart, flowery but not too perfumy. Recent bottling may present a little CO2, a touch of “pétillance” or light fizz on the tongue, if you prefer.

Once again, you’ve got to love Savoie white wines. Fresh, limpid, crisp, vivid and full of minerals that add almost a touch of purity, this Boniface Apremont is no exception. What a wine! Behind its pale straw-yellow color, the aromas are a beautiful cocktail of fresh summer white and yellow fruits including peaches and citrus mixed with mountain dew on pasture grass. There is also a delicate but distinct blossom, flowery element; also reminiscent of the nearby Alpine meadows intermingled with the minerality of the icy glacier spring waters. On the palate the wine is light on its feet, yet complex and delicate like a dancing ballerina. The lingering finish is particularly smooth, pleasingly dry and surely inviting for another sip. In warm and hot weather, only water, Muscadet or some very dry Moselle Rieslings can compete as ultimate thirst-quenchers. It is infinitely refreshing.

Pair it with Savoyard’s specialties like: Raclette and Fondue Savoyarde, Paté en Croute, and the unmistakable “Tartiflette” (Oven baked potatoes with cream, bacon and sautéed onions topped with farmhouse Reblochon cheese, served with green salad) or simply with mussels or Provence-style shrimp “sautée”, flavored with a dash of Pernod.

Bonne retraite Pierre Boniface! And let’s hope that they will continue to walk in your steps long after you will have left your few consulting years.


Step into the Green! Drink more Biodynamic, Biologique and Organic wines (and spirits and food) from sustainable culture and respect the environment! Support the right causes for the Planet and all the people suffering all around the globe! Also follow projects and products from the Fair Trade, an organized social movement and market-based approach that aims to help producers in developing countries obtain better trading conditions and promote sustainability.
Posted by LeDomduVin at 1:49 AM