Saturday July 24th, 2010, another day in the furnace. This year, during the month of July, New York has experienced some of the highest summer temperatures (yet) ever recorded in Manhattan (98 degrees Fahrenheit today). And apparently, it is not finished yet and August seems quite promising too.

When I came out of my apartment this morning to go to work, it was already hot in the corridor and the difference between my air-conditioned nest and the staircase was mind-boggling. By the time I walked down the few flights of stairs, too impatient to take the lift, I was already overwhelmed by the heat.

Once outside in the street, it was surreal, everything was quiet, New York seemed sleepy or resting, silenced by a powerful sun to a tranquil and gentle attitude, far from the usual brouhaha caused by the traffic and other street annoyances and behaviors even as early as it was, around 8.30am.

I walked down the street to the train station, with not a soul around to accompany me. No early birds, no dogs, no locals, just a few cars and in the sky, a big, bright, shinny sun conversing with the ever consistent, incessant and always-annoyingly-around rotating fan sounds of all the air-conditioner units hanging out of nearly every other window on site in every street of the Big Apple. Inevitably coming with the also unstoppable sound of dripping water drops on the pavement.

It makes me think, somehow, that New Yorkers are too spoiled. I’m too spoiled. While the world is fighting a huge economical and financial global crisis, with political tensions and an ever-growing population with no jobs, no education, no food, no potable water, facing daily violence and relentless wars, very uncertain future and doubting faith in pretty much everything and everyone; topped with natural and unnatural disasters, climate changed, manly made mistakes and who knows whatever else... topped with layers of years of asking people to recycle, be greener, use less water and electricity, diminish their carbon footprints, and more… So much trouble in the world, and New Yorkers still push up to the max their air-conditioner at the first rising temperatures of the summer and keep it like this for at least 3 months like nothing else. Pumping the juice... consumption is key! Who cares? That's B******t!

We are far from the long adopted European habits of paying attention to their personal consumption of gas, electricity and water since World War II. Far from their recycling methods, which have been in place for generations as an everyday logical thing to do to preserve the environment, thus avoiding unnecessary daily superfluous trash and plastic pollution.

Here, in New York, and in most of the other mega-metropolis and "mégapole" scattered all around the world, easily recognizable from the sky, due to their shinning luminosity that could deceive you by making you think that it is just after noon at midnight, the switch off button doesn’t exist: apartments and offices stay alight all night, water runs freely for longer than needed, rotten wasted food and constantly overflowing trash, advertising boards glowing of all their marketing eye-catching power, the streets stink and reek like the bad habits of the people that populate them and couldn’t care less, prisoner of their own little world, under pressure from a growing individualism and self awareness…

People think that they are important to everyone else, permanently wired on obviously needed small complex devices "wirelessly" connected to the internet and expressing themselves to the world in less than 150 characters to describe nearly each minute of their day thinking that somebody will care or will be interested because of course they have nothing else to do and everybody has to know… distracting themselves from the everyday hard reality of our retracting world… ignoring the repetitive warnings from their surroundings and the discouraging news… thinking that nothing can touch them… nothing will happen to them…

But look at it… we were about 1 billions in 1820; 2.5 billions in 1920-40; 4 billions in 1980 and we are now about to be 7 billions and growing… we multiplied our estimated world population by 7 in less than 200 years… technology has evolved at lighting speed over the last 100 years … and now even go faster than ever… changing a bit more as I write these words… the science fiction of yesterday inspired the reality of today… the world is more elitist than ever… more in competition… who's the greediest?... but when are we going to measure the consequences of certain of our actions before it is too late?… why succumb to money, power, individualism and greed when we need urgent solutions to preserve our world and make it a better place where people are and should be aware of the whole picture and not only their immediate surroundings and interests without even paying a minute of attention to what is going on and what we are about to become…

However, once again I get carried away with my idealistic ways ... and this is too vast of a subject to only be taken on board by just a handful of concerned people that try to change the world and mankind with their everyday actions, concerns and willingness to help, even if just a little bit… everybody should think about it and act responsibly to change things…but more and more people are just self aware and not preoccupied anymore by the innumerable problems that our planet and all its living things are encountering everyday… piling up problems and concerns into a gigantic wall that will one day shadow our closed-eyes-and-closed-mind's attitude... and then we will really have to find a solution... let's hope it won't be too late! Our kids deserve a better future and right now it is not looking so good... But I need to be positive and take action for my kid and my family! It is important...very important!

Did you ever realize that New York could be some much nicer and surely less suffocating place without for example, all the AC units sucking on hardcore all that somewhat wasted power?

Think about it, it is always the same thing every summer, (and if scientists are correct it may get worst in the near future). Usually by end of May-June, each year, the “ronronnement” (French for cat purring) of the hundreds of thousands air-conditioner units in New York awake, ringing up the arrival of the hot coming months. Yet with them, strangely enough, comes the soggy, high humidity micro-climate that we all know too well and hate. Although New York is great, New York in July and August is pretty awful and unbreathable. It stinks and reeks. And the subway stations become ovens for sweaty locals that couldn't flee elsewhere for some summer vacations and unaware tourists who thought that it was probably better to visit New York under the sun during summer months (by now they should know better, March-April-May and September-October are the best months for sightseeing the skyscraper's city).

All these cold, refreshing breezes blown out from the multiple overworked AC units to cool down your apartment, your store, your office and whatever else room you want cold, come with a high price for the city: rejected hot air from the same units adding heat to the street (paradoxical isn’t it?), higher street humidity partly due to dripping water and huge over-consumption of electricity, sometimes resulting in blackouts (remember the ones from 1977 and 2003). Already surrounded by water, the island of New York's streets are acting as greenhouse, keeping the humidity and hot air prisoner in between buildings, mixed with the pollution from gas and other dirty fumes from trash, etc...

But, yes, I know what you are going to say, without AC, New York will be unlivable and I’m myself using it like anybody else, because I don’t have the choice. The pre-second World War brick buildings should keep the air moist and cool inside, but no, it is the opposite, it is “suffocatingly” hot and unsupportable. They really should invent better insulation system to save energy and preserve New Yorkers and everybody else from the heat and so many other things… yet the human race brought upon itself so many things that it could and should change...it has been years, decades, that we have been warned.... the science fiction of yesterday inspired the reality of today… but what about tomorrow?

All these comments about how, and why, and what should be invented in this world to make things better (or worst depending on the inventions and their purposes), make me think about the book that I’m reading right now, “Oryx and Crake” by Margaret Atwood. 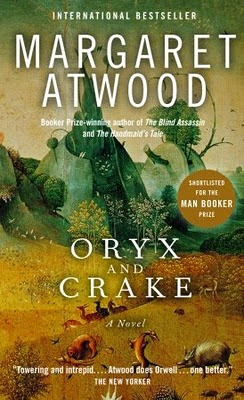 “Oryx and Crake” is a great book definitely not too far from our reality that will make you ask yourself some questions about all the above often rejected and ignored subjects that populate our everyday life, but for what ever reasons leave most of us indifferent to what may result from such a fast paced evolution accessed only on individualism, self-awareness, and self concentrated technology that keep us, 24 hours a day, away from reality to be more essentially in contact with mostly unimportant controversial edited news and images, text messaging, emails and unearthly manners, topped with total refusal to acknowledge or even less, take action regarding the way we are evolving and the damaged world that we are leaving for the future generations… We should stop looking at ourselves and look at the world, even if only just a minute a day.

“Oryx and Crake” follows the reasoning and way of thinking of Snowman, the apparently sole human survivor of the inevitable result and consequence of our relentless current way of living in a future which is not so distant. Through out back and forth passages of his life, the book plunge us in a desolated, devastated, somewhat strange yet so recognizable world, where Snowman remembers and recalls to himself the memories of the past and slowly help the reader to comprehend how it happened, why, and what could have happened if... The book also counts the story of Oryx, the somehow unreachable love of Snowman and Crake, Snowman's long friend and the mad-scientist of this tale with idealistic visions who wanted to created a different world. But I already said too much, just read it.

I highly recommend “Oryx and Crake” to frighteningly-close-to-the-reality science fiction book amateurs and good writing connoisseurs. Margaret Atwood’s prose is delightful and complex, with easy to grab ways to describe the cynical human nature and demeanor in its entire splendor.

Thank you Margaret for such an eyes opening book. (I will be reading your award winning book “The Blind Assassin” next).

Step into the Green! Drink more Biodynamic, Biologique and Organic wines (and spirits and food) from sustainable culture and respect the environment! Support the right causes for the Planet and all the people suffering all around the globe! Also follow projects and products from the Fair Trade, an organized social movement and market-based approach that aims to help producers in developing countries obtain better trading conditions and promote sustainability.
Posted by LeDomduVin at 1:33 AM