Boozeday: a Mayan Calendar misinterpretation (a good occasion to unveil some of our stashed wine gems).


As we are coming closer to the fatidic date of December 21st and the misunderstood and misinterpreted message from the Mayan calendar supposedly announcing Doomsday or/and the end of the world, I think it is about time to think about opening some of these precious bottles stashed away for better occasions, and rename that day: Boozeday!

My view is the positive one:

Such occasion to celebrate may not happen again (or will it?). Wait a minute, the end of the world has already been predicted many times over since the middle ages and more especially over the last few centuries and so far we are still here. It was even supposed to happen last year in October, and some new source says that it won't happen this year but in 30 years from now.

Moreover, depending on certain calendar depending on tradition, culture, religion and belief, the year 2012 from the Gregorian Calendar (Western or Christian calendar), which is the most internationally accepted as the civil calendar, corresponds to another year. So how can we be so sure about the interpretation of ancient hieroglyphs pointing at the end of a Mayan calendar dating back from 1,300+ years earlier discovered about 40+ years ago?


Well, some interpretations talk about doomsday, the end of the world as we know it: planet crashing against the earth, giant meteorite encounter or even the lining up of all the planets in our solar system and all the consequences that may result from it. Some even push the theory of Aliens visiting earth (again? anyone wants to meet in Bugarach?). But other versions, more optimistic, favor the probability of a conscious awakening of mankind, an enlightenment, a considerable change for the better. And I tend toward the latter.

After all, what is the end of the world and how can we really interpret it? For some people that have been the victims of wars, genocides, famines, diseases, contagions and natural catastrophes, the end of the world already came. Think about it. They lose their family, friends, houses even their hopes and dreams. Despite some help from the local community and benevolent people, certain Governments and some ONG and other Foundations, they lost everything they knew and love.

So, I'm hoping for a considerable change for the better. A better understanding of our world as a whole, not necessarily divided anymore by greed, envy, power, politic, money, religions and races. A needed step to move forward and end the non-sense that we can witness everywhere, everyday. A better comprehension of our different cultures and traditions and what we can learn from them to satisfy our needs and preserve our world.

And for that we need common sense, intelligent reflexion on solutions rather simply pointing at the problems and more especially a lot of people that are willing to change things, rather than just a minority as it is the case presently. But we also need the best friend of men for the past 4000+ years: wine.

Wine as always been present and fervent actor of some of the most historical decisions ever made in the history of mankind. Beer and other spirits like Vodka, Gin, Whisky, Bourbon, Pisco, Mescal, Tequila, Rhum, Sake and other Jiu, may have had an invaluable influence too on the greatest minds of our times.

It was customary for the Egyptian. Greek and even the Roman Empire to consume an insane amount of wine apparently, embedded in their culture, tradition and life style. As a proof, one can also come to realize that the Roman Empire boundaries stopped were they couldn't produce wine (due to the climate, geography, etc....). And I will pass on the chapter of Christianity and the knowledge of the monks perpetuating the planting of vines and thus the production of wine everywhere they went for the purpose of the church as the sacramental wine, their own and their landlords consumption and the undeniable impact on western world and overall modern civilization up to these days.

In any case, end of the world or not, let's take that opportunity as an excuse to invite and gather with friends and family to enjoy a great meal and open some great bottles of wine. Because, if the end of the world happens then you will have had a great time enjoying a gargantuan meal with some of the greatest wines that you stashed away for special occasions. And if we all happen to survive until the 22nd, then the only thing worth remembering will be that you had a great time (maybe a great hangover too) and life can continue.

Yet, it may have made you realize something else too (conscious awakening anyone?). And when I say you, I'm not talking about you only, but us all, to realize that we definitely need that change to happen, and from a simple theory transform it into a reality. Men finally coming to their senses to realize that something grandiose and meaningful needs to happen for the good of the human race: turn the page, forgive and forget the past and look toward the future by learning from our mistakes and go forward at  a more peaceful and creative pace, rectify our behaviors and open our minds.

And the only thing that can really open our minds is wine. Wine makes you usually happier, more confident, gives you a spark of freedom of speech and invigorate your ideas and dreams. As it has been said for centuries, wine, more than any other alcoholic beverages, basically untangles your brain and tongue.

However, whatever you decide to do on that day and whatever may happen (that is if something really happen, but I don't think so), whatever will come after will and need to be better in any way, shape or form. It has to be a day of reflexion upon ourselves and our actions in our everyday life, with ourselves and with others.

A chance to gather with the ones we love and the things that have a sentimental meaning for us, and to understand what is important in our life. What do we want to do with our life? And what can we do to make it better?

And what better than a day spent talking freely, putting our cards on the table, opening up and discuss, confront each-other with the things that we always wanted to say or do, complemented by a nice glass of Jaja (French slang for wine).

Of course, you don't have to wait for the 21st to do that, but on that day, a least you will have a good excuse to do it. We all need an excuse for everything, isn't it right?

I could continue to bore you with my philosophical and spiritual way of thinking, or even develop on the great job that producers using sustainable, organic, biodynamic, Fairtrade and other Natural and "good for the people and the world" culture (and not only wine producers) achieve everyday all around the planet (as I did in many of my previous posts); or even talk to you about all the initiatives taken by millions of people everyday to make that world better, but I think that is enough for this post.

So, stay tune for more thoughts and notes on wine and life in general, and soon with the selection of wine that I may or could drink on Boozeday!

Live and drink responsibly with the respect of others and the environment. There are nothing more important than family and friends, and live a positive life the way you can with what you have.

Oh, by the way, before I forgot, there is a new French book that just came out about people that take good initiatives, it is called: Un Million de Revolutions Tranquilles by Bénédicte Manier. 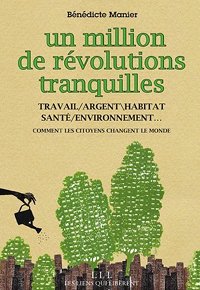 I highly suggest it for those of you who can read French (no translated English version yet, I don't think). It is very informative, educational, interesting and eyes-opening in many ways.

Step into the Green! Drink more Biodynamic, Biologique and Organic wines and spirits and food) from sustainable and natural culture and respect the environment! Support the right causes for the Planet and all the people suffering all around the globe! Also follow projects and products from the Fair Trade, an organized social movement and market-based approach that aims to help producers in developing countries to obtain better trading conditions and promote sustainability. Also support 1% for the Planet, an alliance of businesses that donate at least 1% of their annual revenues to environmental organizations worldwide. "Commerce Equitable" or "Fair Trade" is evidently and more than ever a needed movement connecting producers and customers, to be aware of others and their cultural and traditional products based on high quality, natural components and craftsmanship.
Posted by LeDomduVin at 3:35 AM

Email ThisBlogThis!Share to TwitterShare to FacebookShare to Pinterest
Labels: For a Better World, Thinking Out Loud..., Wine Talk