The 1955 Classification of Saint-Emilion Wines - Will They ever get it right?

The 1955 Classification of Saint-Emilion Wines

Will They ever get it right? 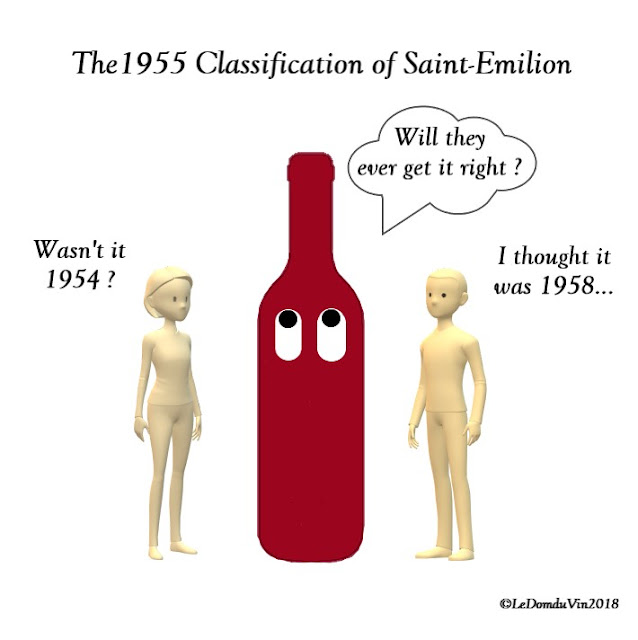 D: Prior to talking about the 1955 Classification, let's clarify a few important points about the classification of the wines of Saint-Emilion in general...

It is important to know that, since 1984, there are only 2 Appellations in Saint-Emilion
The AOC Saint-Emilion Grand Cru is then divided as follow

J: Wait a minute... How come there are "Grands Crus Classés" and "Grands Crus", are they not the same thing?

D: I know it is confusing for most people, and that is why I wanted to clarify this point.

The request to be part of classification is at the initiative of the Chateau owners/producers. To be part of the classification, they must file an official record for each vintage and the vineyard conditions and management must respond to very specific and strict mandatory criteria fixed by the INAO.

For example, to benefit the "Saint-Emilion Grand Cru" Appellation, the estate vineyard's yield must be at 40 hl/ha and the wine ageing 12 months minimum. (If you understand and read French, you can find all the specific details of "Cahier des Charges des vins de "Saint-Emilion" here).

D: For you to have a clearer idea, I made this Saint-Emilion Classification Pyramide (a visual is often better than words)...

The first classification of Saint-Emilion Wines... and the following ones...

The Classification of Saint-Emilion wines is a controversial and complicated subject that has been written about countless times by journalists, wine critics and wine columnists, since its creation back in 1955.


D: Well, guys, let me try to explain it to you in the most simple way and tell you what really happened to put an end to the polemics about when it was created... ok?

N: Thanks D, it would be good to know because it is quite confusing...

D: The history of this classification began in 1954...

It all started when the "Syndicat de Défense de l’Appellation Saint-Émilion" (Syndicate of Defense of the Saint-Émilion Appellation) requested the "Institut National des Appellations d’Origine" (INAO) to proceed to the classification of the crus of this appellation, via the decree of October 7th, 1954.

Created in 1935 and controlled by the government under the Ministry of Agriculture, food, and forestry, the role of the INAO is to ensure the recognition and protection of official signs identifying the quality and origin of agricultural, food and forestry.

The INAO (nowadays called "The Institut National de l'Origine et de la Qualité") is the French organization in charge of regulating French agricultural products and implementing French policy on official signs of identification of the origin and quality of agricultural and food products, with Protected Designations of Origin such as:

D: the 1st Article of the Order says:

"The classification of the wines of the Saint-Emilion appellation is approved in accordance with the provisions of the decree of October 7, 1954, as amended by the decree of 18 October 1958."


The first Classification of 1955 included the following (by Alphabetical order)

D: And that's about it really... Is it clearer now?

D: Well,... the 1954 decree stated that the INAO must revise the classification every 10 years.

Six classifications have been established since 1954:

1955, First Classification  (refer to details above and/or check the full list of the classified Chateaux here)

The 2nd Classification, homologated by the Order of November 17th, 1969, included

The 3rd Classification, homologated by the Decree of May 23rd, 1986 (approving the classification of the crus of the wines of appellation contrôlée "Saint-Emilion Grand Cru" and repealing the provisions of the Decree of 17 November 1969 (Official Journal of 27 May 1986)), included

The 4th Classification, homologated by the decree of November 8th, 1996, included

In September 2006, the fifth classification was announced but was challenged by producers that had been demoted from "Grand Cru Classé" to "Grand Cru" only:  Château La Tour du Pin Figeac, Château Cadet Bon, Château Guadet and Château de la Marzelle.

2012, the 6th and latest Classification (see the full list of Chateaux here)

The 6th Classification took much longer than expected to be finalized due to legal wrangling. It was published on September 6, 2012, and was homologated by the order of October 29th, 2012. It resulted from a new procedure, entirely under the authority of the INAO, with the assistance of the Ministries of Agriculture and Food.

That's all folks! for today... I hope you enjoyed this post and I also hope the Saint-Emilion classifications feel clearer now (at least for some of you).... and if you enjoyed reading it, then stay tuned for posts like this one in the near future.

Posted by LeDomduVin at 8:35 AM