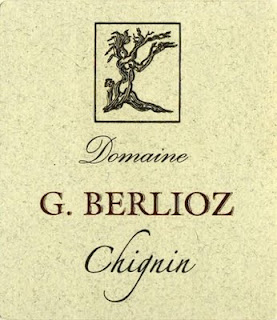 2008 Domaine Gilles Berlioz Chignin Vin de Savoie (White Savoie Wine) France
Here we go, I'm back for more writing after a little break. So, following my previous post on Cellier du Palais, another producer from Savoie, here is a post on Gilles Berlioz, another one of these irreductible Savoyard producers and one of the benchmarks on the Chignin appellation.

Chignin (Suite): Overhanging the valley at an altitude of roughly 370 meters on the southwestern slope of the Summit of Montgelas (1300 meters above sea level), this pretty Savoyard village of Chignin can be spotted from a distance due to its 14th century tower and its 19th century chapel dedicated to Saint-Anthelme. Also, due to its location, Chignin offers a fantastic panorama of the mountains of the Chartreuse National Park, especially the "Mont Grenier", located westward on the opposite side of the valley. Moreover, directly opposite of Chignin on the other side of the valley and niched on the eastern slope foothills of the summit of the "Pas de la Fosse", you can also see the village of Apremont, one of the other Cru villages from "Vin de Savoie". "Les Abymes" is nestled in the valley, separating the Massif des Bauges to the east and the Massif de la Chartreuse to the west, between Chignin and Apremont.

FYI: The region of "Les Abymes" has been scarred in 1248 when a part of the Mont Grenier felt apart in the valley below, crushing houses and villages and burying villagers at the foot of the mountain. The mass of crumbled rocks from this event has formed a rocky chaos of multiple small rocky talus named “Abymes de Myans”, creating a ground of predilection for wine growing where the crus of Abymes and Apremont have been produced (since then) from vines planted on iron-rich soils, a positive result to this geological catastrophe.

However, let's back to the other side of the valley, a few kilometers east, in the village of Chignin, with our producer of the day: Gilles Berlioz.

Chignin's vineyards are planted on chalky scree-covered soils of the south-west facing slopes of the Montgelas Summit's foothills. Mostly protected from cold winds of the north by the background mountain and benefiting of great sun exposure and excellent drainage, Chignin's vineyards produce some of Savoie's best wines, including Savoie's pride, the rare Chignin-Bergeron: a highly perfumed and intriguing white, made exclusively with a Rhône valley's grape called Roussanne, produced in minuscule quantity, surely responsible for the fame of the region.

Gilles Berlioz: In 1990, Gilles, the son of a local agricultor, inherited of a small family vineyard of 0.8 hectare (about 2 acres). At the time, he was working as a landscape designer in a local firm and, due to his job, was already fond of ground's geology and topography. Very well acquainted of working the soils and modeling landscapes, he gradually learned about vine-growing and winemaking and became more involved with his little plot of land. Cultivating real enthusiasm for wine, he acquired further small plots of land within Chignin and expanded his vineyards to 3.5 hectares. Shortly after, he decided to drop conventional cultivation methods in favor of 100% organic agriculture with Biodynamic touches here and there (in France we call that "Lutte Raisonnée" or sustainable culture with a twist).
By choice but also due to their fairly small size, Gilles takes care of his vineyards himself all year long. He attend them every day like a careful, attentionate and devoted father: plowing the ground, hand weeding the bad weeds, pruning, cutting, de-leafing, and treating them with plant based concoctions. Also by choice and despite his low amount of vineyards, Gilles aims for quality rather than quantity, with a production of about 30 hectoliters per hectare, which is low compared to the average 70 hectoliters per hectare of certain properties.

Remember that, not long ago (40 years at the most), wines from Chignin (like many other wines in France) were overproduced and not very interesting, or lets say, not as good, expressive and clean as they are now. They were mainly drunk in winter by the locals with stew, ragout and more especially cheese "Raclette" and meat "Fondue", and things haven't changed much since then, about 80% of most Savoie wines are still consumed locally (including a tiny amount nationally), the other 20% are exported in the major markets but they remain somewhat quite marginal.

Raclette: A winter favorites of mine, traditional Raclette is made with melted semi-firm, salted cheese made from Cow's milk. However, varieties made with white wine, pepper, herbs, or smoked cheese also exist. The raclette cheese of choice originates from the Swiss canton of Valais but it is now also produced in the Savoie and Franche-Comté region. The crisp, bright, vivid and extremely mineral whites from Savoie's high elevation vineyards have great acidity to cut through the cheese's fat and complement this friendly and family gathering dish.

Meat Fondue: Also for the same "fatty" and earthy, wintery causes, Chignin and more generally Savoie's whites (and reds too) are great with meat "Fondue(s)". Meat fondue, also known as oil fondue, consists of cooking all kinds of meats, poultry, and seafood in a pot of heated oil. Each person participating in a fondue experience, cooks his/her own piece of meat by placing a small portion or chunk at the end of a long fondue fork and placing it inside the pot of oil to cook. When the meat is cooked to ideal "cuisson" in the oil, each person can then dip each piece of cooked meat into previously prepared sauces. Meat fondue recipes can also be prepared as "broth fondue", by replacing the oil with your favorite broth: chicken, vegetable, or beef to name the most well known.

Vinification: After being carefully hand harvested, the grapes are slowly pressed (between 4 and 6 hours) and the fermentation process occurs naturally with no addition of extra added cultured yeast, sugar or acid. Gilles matures his wines for about 9 months in fiber-glass vats, and used or neutral oak barrels. Following the prescriptions of the lunar calendar, bottling takes place in the beginning of summer, then the bottles are stored to rest for one year before being sold.
Production: Gilles Berlioz crafts 4 wines in super tiny quantities: 3 whites made respectively with Jacquères, Altesse (also known as Roussette) and Roussanne (Also known locally as Bergeron) for his Chignin-Bergeron; and 1 red made with Mondeuse from vines recently planted (2008 was the first vintage).

All of Berlioz' wines have tremendous Terroir characteristics and helped to put back Chignin on the map of the serious wines from France. Moreover, his name is not Quénard, and no offense to anyone, but it is nice to see that there are other producers in Chignin than the Quénard families and relatives (FYI: Quénard in Chigin are like the Smith in New York).

To better understand about the "Quénard", see the following pictures taken from the website of Charles Neal Selections, an established and estimated importer of fine wines and spirits from lesser known French regions, based in California.

"Trying to find the right Quenard in Chignin can be difficult." (courtesy of Charles Neal)

After this little parentheses, here is the description of our wine of the day:

First, I need to say that "Gilles Berlioz Chignin" has been one of my favorite wines this summer since last June, with "Eugene Carrel Jongieux" and "Cellier du Palais Mondeuse" (and a few more).

Secondly, I feel that it is important to precise and establish the fact that although Savoyard wines are often enjoyed during winter months with Raclette and meat Fondue, I personally think that due to their high acidity and minerality, and light overall profile, they make perfect summer whites.
Made with 100% Jacquère, the 2008 Gilles Berlioz Chignin exposes a pale golden color in the glass. The nose is fresh and slightly nutty, with white flowers, white peach and fresh almond on the nose. The palate is fresh, rich and quite silky, with very good acidity and balance, gradually expanding toward a lingering finish with unripe apricot skin and almond flavors. This versatile will be great as an aperitif, perfect with Raclette and Fondue, but will also nicely complement sheep and goats cheese, as well as shell fish and river fish.

For a small production, low yield, organic white wine, held for a year after bottling to reach ideal condition before being sold and with only a few cases reaching the US market, it is definitely a great value to discover. Moreover, demand may, with time, increase the price, but for now it remains a real bargain under $20.

Step into the Green! Drink more Bio and organic wines (and food) from sustainable culture and respect the environment!
Posted by LeDomduVin at 11:56 AM