Cims de Porrera
A few years ago, in Avril 2005, I had the privileged (quite a few years in a row) to spend a few days in Spain's most recognized wine regions, but this year more particularly Priorat (also known as Priorato) to visit some of the most exclusive wineries and talented winemakers of Catalonia.

My old boss, Justin (a Spanish wine aficionado) and myself, a wine buyer and wine lover working for a retail store specialized in Spanish wine, were welcome pretty much everywhere with warm welcomes and able to enjoy some private tastings with the winemakers on older and current vintages but also tasting wine at the barrel to evaluate the next vintage, which happened to be the extraordinary 2004 (this year we also went to Rioja and Ribera del Duero to also taste at the Barrel...What a trip and what a promising vintage!).

Our journey thought out the mountainous and rocky steep terraced slopes of Priorat, a little enclave in the mountains located about 130 kilometers south-west of Barcelona, brought us to some of the most well known wineries like: Clos Mogador, Alvaro Palacios, Mas Doix, Vall Llach, Mas d'en Gil, and of course the unmissable Mas Martinet.

Mas Martinet was established by Josep Lluis Pérez, one of the prominent figures of Priorat and more especially, the leading winemaker of one of the five pioneer families who re-discovered the area and its potential in the late 1980s and rapidly elevated the fame of this region by producing world-class wines from very old vines.

Mas Martinet is now even more famous since Sarah Pérez, Josep Lluís daughter, took over the property and handled the vinification and winemaking. She produces gorgeous wines that are generous, full, robust yet elegant, racy and almost feminine in a very balance way with lot of layers and nuances; definitely charming, lingering and age worthy Priorat. A "must" try.

Priorat has evolved over the past 20 years. It is now much more open to the public and experienced a renaissance with hotels, Bed & Breakfast, gites and restaurants mushrooming slowly without impairing the rustic and jolliness aspect of the region and its incredible landscape.

We had dinner at Sarah's restaurant, the "Irreductibles" (like in Asterix & Obelix the famous French comic book series created by Goscinny and Uderzo), a delectable fusion restaurant opened in 2004, mixing traditional Spanish and Catalan specialties with a flair of Asian culture and other influences from other countries.

During the Dinner, Josep Lluís Pérez, an oenology professor and an unconditional searcher, spent a great deal of time explaining his last research about Hydrometry and new irrigation systems in the vineyards. Sarah Pérez couldn't stay and left just after the aperitif but it was a pleasure to have her with us for a little while.

The one who put a smile on our faces for the entire dinner was the jovial Adría Pérez, the son of Josep Lluís and brother of Sarah. He made a big impression when he arrived in his custom made "bolide", a flashing car mixing retro and new features in a stylish way. Unmissable, especially on the small curvy road of Priorat, you know who he is right away. 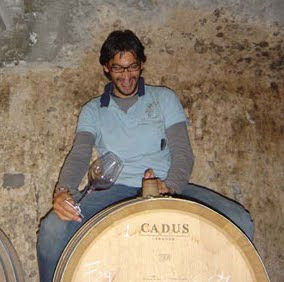 Adría topping one of his barrels inside one the old concrete tanks at Cims de Porrera.

Adría is now in charge of the old cooperative of Porrera, one of the village in Priorat. In 1992
the Pérez family began managing the local cooperative in Porrera. However, in 1996, Josep Lluís Pérez told the members of this former cooperative that he would buy their entire production at a good price; in exchange he would improve viticultural and vinification practices.

Winemaking seems to be a family's talent going from generation to the next, because Adría is doing a great job. It is quite fascinating to realize that instead of using the old concrete tanks that were available to vinify and age the wine, they have been opened and they are now filled with oak barrels...Yes, you understood well, at least it was like this when I last visited it, the concrete tanks next to each other that used to welcome wines are now open and form somewhat like a long corridor passing through small rooms where now resides multiple oak barrels (in each room) where Adría crafts with passion two wines: Cims de Porrera "Classic" and Solanes, the 2nd wine.

Last produced in 2001, Adría Pérez only produces Cims de Porrera Classic only in the finest years. The wine is made from the oldest Carineña (Carignan) vines, producing very low yield, planted on steep rocky slopes at 400-600 meters of altitude (hence the name "Cims" which means Summits in Spanish) surrounding the village of Porrera, south Catalonia (Spain). 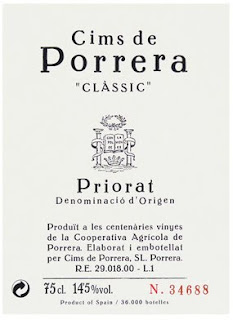 A blend of 90% Carineña (Carignan) and 10% Garnacha (Grenache), the 2004 Cims de Porrera Classic is a long-awaited reward for those who truly appreciate exceptional Priorat wines.

Already attractive in the glass this wine has a deep, intense ruby hue. The nose exposes aromas of back berry, Cassis, dark cherry and oak notes mixed with intense stony minerality, liquorice, almost leather, spice and roasted coffee hints. The concentrated and expanding palate follows with the same type of flavors, adding in complexity by the seconds. The finish is juicy, full of fruit and soft, chewy and present and young yet integrated tannins. A delightful and substantial wine to enjoy with grilled steak, a rack of lamb or a roasted suckling pig (like in the banquet of Asterix's village at the end of each book!).

Thank you Josep Lluis, Sarah and Adría Pérez for the formidable wines that you produce which enhance my lunch or dinner when I drink them, but also thanks for being such an inspiration to other innovative winemakers (in Spain and elsewhere). Last time my colleague Justin did have the chance to ride in Adría's car, how lucky! I hope that Adría will still have his car at my next visit....

Although I didn't talk so much about Sarah's wines, they are a "must" try too. Cims de Porrera and Mas Martinet are my two favorite Priorat wines, with Vall Llach and Clos Mogador. More recently I also came across a small, well crafted and affordable Priorat wine called "La Nita" (the 2005 and 2006 vintage were really good).

Info and pictures partly taken from the importer website at www.foliowine.com
You can buy the wine at the store at www.HeightsChateau.com
You can also use www.winesearcher.com to find it if you do not leave in new York

Step into the Green! Drink more Biodynamic and Organic wines (and food) from sustainable culture and respect the environment!
Posted by LeDomduVin at 1:14 PM