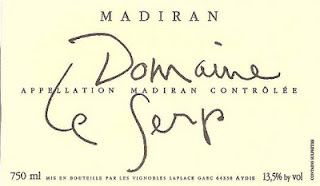 As I already discussed it in many other posts, the southwest of France encompasses many small appellations and estates that existed and were highly regarded long before the actual Bordeaux flagship estates from the left bank appeared.

Remember that the Romans planted the first Bordeaux vines along the eastern part of the Dordogne River, on a limestone plateau perfectly suited to grow quality wines, which contributed to the lingering reputation of the area where the medieval village of Saint-Emilion now stands, since the 2 century AD.

That said, the right bank and especially the Médoc and more importantly Haut-Médoc were for most of their history, a vast region of salt marshes used for cattle and sheep grazing rather than viticulture.

In the 17th century, Dutch merchants began an ambitious drainage project to convert the marshland into usable vineyard area. The project was paid and requested by the Negociants merchants and aristocrats who had the financial means and saw a potential to grow their business by expanding the surface of production and thus selling more wines.

Their objective was to provide the British and Dutch market a wine alternative to the Graves, Saint-Emilion and Portuguese wines that were predominantly dominating the market at that time in the 17th century. Using technology that was advanced for that time, the Dutch were able to convert enough marshland to allow the implementation of larger estates than the original few ones already scattered all along the Gironde.

Soon the Bordeaux wine regions of Margaux, Saint-Julien, Pauillac and Saint-Estèphe took shape, growing around the eponymous ports that were the only accessible way to carry the barrels up the Gironde to be shipped to England and other countries and down the Garronne Rivers towards Bordeaux to be aged in the Negociant’s Chartron warehouses. By the 19th century, the wine region of the Haut-Médoc was one of the most prosperous in France, with wines that had an international reputation that would be unparalleled till the late 20th century.

Meanwhile, some regions of the southwest which were once much more famous than Bordeaux, saw their reputation slowly diminished and somewhat disappeared from the export market, almost forgotten in the shadow of Bordeaux.

In the kingdom of Gascony and its surroundings, an area belonging to the Guyenne region, which now forms the southwestern triangle of France called Aquitaine, vineyards and orchards around the medieval villages of Sarlat-la-Canéda, Castelnaud-la-Chapelle, Cahors, Madiran, Carcassone or even the unmistakable and magnificent fortified city of Carcassonne (just to name a few), witnessed centuries of wine recognition way before Bordeaux, with reputation dating back from before the 10 and 11 century.

The wines from regions like Bergerac, Monbazillac, Pecharmant, Montravel, Duras, Marmandais, Buzet, Cahors, Madiran, Pacherenc du Vic Bhil, Gaillac, Marcillac, Cotes du Frontonnais, Jurancon, Irouleguy and Bearn, continued to trigger the interest of the local and regional market but were not as sought after as they used to be by the national and even by the international market, up until about 10-15 years ago.

Cahors pretty much always kept is notoriety, producing strong, earthy, tannic, dark Malbec based wines with long ageing potential. Bergerac and its surrounding Appellations also remained fairly renowned to certain connoisseurs and amateurs. One of the Appellations that really experience a renaissance on the international wine market, in a small scale, but don’t’ get me wrong it is a huge step for the appellation itself, is Madiran.

Madiran
At the crossroads of the département of Gers, Hautes-Pyrénées and Pyrénées-Atlantiques, planted on the gentle slopes of the Béarn, Madiran was born approximately around the 1st century BC.

The locals were growing vines and producing wines for the land Lords and for their own consumption. In the eleventh century, the monks founded the Benedictine Abbey of Madiran and improved the quality of the vineyard. Pilgrims walking to St Jacques de Compostela crossing this region quickly carried the fame of Madiran’s wine.

Madiran became an appellation in 1948. Nowadays, around the villages Crouseilles, Lembeye, Mont-Disse, Corbère-Abères, Arricau-Bordes, about 1600 hectares are cultivated in the traditional style by multiple cooperatives and family run estates. A tasting is required!

Madiran, like most southwestern French appellations, is rather unknown or let's say undiscovered, but it started to reappear on the European and international scene about 10 years ago and continue to climb the steep ladder of recognition.

Madiran is a commune in the Hautes-Pyrénées department. Part of the Gascony area, Madiran wines are produced around the village of the same name located about 47 kilometers northeast of Pau and 27 kilometers southeast of Aire-sur-l'Adour, nestled in a little valley surrounded by gentle rolling hills preceding the foothills of the Pyrénées.

About 10 kms apart from each other yet sharing the same area, AOC Madiran is the red twin sister of another appellation called Pacherenc-du-Vic-Bihl producing only whites.

The production area for Madiran wine is spread over three departments: Gers, Hautes-Pyrénées and Pyrénées-Atlantiques. Madiran appellation produces slightly rustic, earthy, somewhat esoteric, fairly rich and tannic reds made with at least 40% Tannat, the predominant and indigenous grape variety which contributes to the fame, the uniqueness and the particular characteristic of Madiran wines.

The hallmark of Madiran, the black-skinned Tannat grape is often recognized for its deep color and astringency. It has great ageing potential and need time to settle down and tame its tannic structure. In order to be more enjoyable in its youth and soften the tannins, new techniques have been used like micro-oxygenation to maximize the fruit. Also due to its tannic structure, Tannat has often been blended to make it more approachable.

Tannat usually accounts for 40-60% of the final blend and is regularly blended with Cabernet Franc (locally known as "Bouchy" or "Bouchet" in the rest of "Southwest of France" region), Cabernet Sauvignon, Courbu Noir (also known as "Madiran"), "Fer Servadou" (also locally known as "Pinenc") and "Cot" (worldly known as Malbec or "Auxerrois" in Cahors). However, most of the best and most authentic Madiran wines are made with 100% Tannat, and usually express flavors of black fruits, earth, spices with toasted hints due to oak ageing and a fairly present tannic structure in the finish, which generally contributes to good ageing potential (between 4 to 8 years in general, and more for the best vintage).

FYI: Tannat, a typical and indigenous grape variety from the Pyrénées and more especially the Basque country, was imported to Uruguay in the 19th century by the basque settlers. It has now become the national grape variety of Uruguay, like: Malbec for Argentina, Carmenère for Chile, Shiraz for Australia, Pinotage for South Africa,etc... Tannat is also known in Uruguay as "Harriague", named after Pascual Harriague, one of the settlers who introduced it in the country. In France, in addition to Madiran, Tannat is also produced in the region of Irouléguy, Tursan and Béarn.

Also crafted in the Madiran region, Pacherenc du Vic-Bilh Sec produces dry and sweet whites predominantly made with a blend of two local and indigenous grape varieties including "Petit Courbu" (another traditional Gascon's grape variety and a variation of the "Courbu Noir") and "Petit Manseng" (the sister grape of Gros Manseng, both indigenous from Gascony and more especially used in the Jurançon appellation to produce dry and sweet whites).

Pacherenc du Vic-Bihl Sec wines are usually dry and tangy yet ample, intriguing and quite rich with a deep yellow color with somewhat golden apple, yellow peach, pear, honeysuckle, honey and fresh hay aromas and flavors. They can also be sweet depending on the vintage and sold under Pacherenc du Vic-Bihl (without the "sec" meaning "dry" in the name). In any cases, the local Courbu and Petit Manseng must make up at least 60% but not exceed 80% of the blend, which also can include "Arrufiac" (or Ruffiac) and Sauvignon Blanc (10% max).


Let's go back to the wine of the day:

Vignoble Laplace -Domaine Le Serp Madiran Tannat Southwest of France
Domaine Le Serp is a bottling from the Vignoble Laplace – Chateau d’Aydie, an estimated and praised estate which produces traditional Madiran wines with a modern twist. Pierre Laplace and his 4 children is one of the most dynamic, innovator and influential families in Madiran. The last decade was important regarding the restructuring of the 70 hectares of vineyards, which were replanted with high density, as well as the optimization of extracting, maturing and aging methods.

You may not be familiar with Pierre Laplace or even the small village of Aydie near Madiran, however Château d’Aydie and the Laplace family are widely regarded as one of the foremost quality producers of Madiran. Frédéric Laplace was recognized as one of the pioneer winemakers of Madiran when he first bottled his Madiran wines and sold them under his own name when the appellation was first created in 1948 with just 50 hectares of vineyard under production, compared to the actual 1650 hectares that Madiran now encompasses.

The whole venture is very much a family affair – the three grandsons and granddaughter of Frédéric run the estate between them – Francois in charge of the business side; Jean-Luc is in charge of wine-making; Bernard manages the vines; and Marie presides over the office, whilst their father Pierre is in semi-retirement but still very much involved. Their Madiran wines are some of the flagships of the appellation made with at least 80% Tannat aged in small barrels and large used oak vats. Always involve in new little projects, the Laplace family produce a wide array of different regional wines from their unmistakable A.O.C. Madiran to their delightful Vins de Pays they launched in 1995.


Le Serp is one of numerous labels made under the AOC Madiran, and like their grand vin Chateau d’Aydie, it was crafted with 100% Tannat from younger vines averaging 10 to 15 year-old. The wine was vinified with a cold soak so as to be enjoyable young by highlighting the fruitiness of the Tannat over its tannins. Madiran yields earthy, dark, full-bodied wines of great depth and complexity, with ripe fruit texture and solid tannic structure, and Le Serp is no exception to the rule. This delightful and approachable Tannat has great fruit and depth, although dry as it should be, it possesses enough fruit to make it really enjoyable.

Behind its dark ruby robe, the 2006 Le Serp Madiran Tannat offers aromas of dark fruit and ripe berries, floral scent, intermingled with earthy notes. The dark ripe fruit mixed with violet and other floral and earthy notes on the palate are nicely complemented by flavors of red fruit, dark cherry, plum, licorice, spice and cinnamon flavors. The finish is fairly full-bodied with present yet smooth and integrated tannins. Ready to drink now after a little decantation, it will age nicely for the next 2-3 years. Enjoy it with barbecued red meats, or more appropriately with southwestern France specialties like Cassoulet, Confit de Canard (duck), game and strong cheeses.

Step into the Green! Drink more Biodynamic, Biologique and Organic wines (and spirits and food) from sustainable culture and respect the environment! Support the right causes for the Planet and all the people suffering all around the globe! Also follow projects and products from the Fair Trade, an organized social movement and market-based approach that aims to help producers in developing countries obtain better trading conditions and promote sustainability.
Posted by LeDomduVin at 7:33 AM