Picpoul de Pinet
With Summer knocking at the door, literally with the temperatures of this past week-end, it is time again to focus a bit more on crisp Whites, thirst quencher Rosé(s) and light, fresh Reds. Among my favorite whites for Spring and Summer, Picpoul de Pinet wines are surely great contenders: fresh, vivid, light, uncomplicated and versatile, and more importantly totally inoffensive.

Yes, inoffensive, because I think that in comparison, a white stinking of non-integrated new oak and full of alcohol above 13.5-14 degrees is really offensive to me, especially when it is humid and “suffocatingly” hot in the street of New York.

Picpoul de Pinet is a small appellation of the western part of Languedoc. Along the Mediterranean Sea, on the Gulf of Lion, the Terroir of Picpoul de Pinet extends around the Bassin de Thau, in the middle of a triangle between the towns: Agde Pezenas and Sete.

This is the greatest white wine region of Languedoc: a limestone plateau rising sunny covered with vineyards and fragrant bush ordered, dotted with high pine forests.

Picpoul de Pinet AOC only produces white wines from the Picpoul Blanc, an indigenous white grape variety also used in the Rhone Valley. Its name means "lip-stinger" and refers to the high acidity of the grapes. Although Picpoul Blanc is the most well known of the three, it also has two siblings that generate a bit less attention: Picpoul Noir and Picpoul Gris, but that are also used in Languedoc and Rhone.

Les Vignobles Montagnac
Montagnac is a little village located in the northern part of the Picpoul de Pinet appellation, about 15 kilometers (driving) north of the village of Pinet and about 6 kilometers northeast of Pézenas.

When it was built, Montagnac was the largest vinification facility in the Hérault. Its vineyards stretch from the banks of Thau Lagoon to the foothills of the mountains on the right bank of the River Hérault. 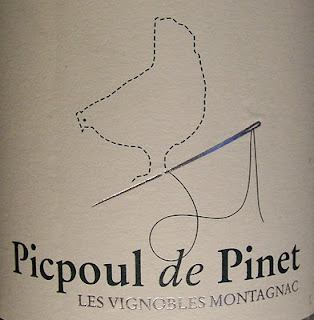 It was made with 100% Picpoul Blanc grapes from mechanically harvested 8 years old vines planted on calcareous red clay slopes known as "Terres Rouges”. The grapes were pressed immediately, and the best juices were selected then allowed to settle before ongoing the temperature-controlled fermentation in stainless steel tanks. The wine was left on its fine lees to accentuate flavors, texture and complexity without imparting its freshness.

Known as the Muscadet of the South, Picpoul de Pinet produces clean, fresh and balanced white wine that works well with variety seafood, and this one from Montagnac is a great example of the friendliness of the wine from this region.

Floral and white fruit notes hold up nicely against vibrant acidity that lasts into a crisp, round finish. Uncomplicated, versatile and deliciously easy going, this little wine will be perfect for casual dinner parties or meals at home or for picnics.

Info partly taken and edited from the winery website at www.cave-picpoul-de-pinet.com

Step into the Green! Drink more Biodynamic and Organic wines (and food) from sustainable culture and respect the environment! Support the right causes for the Planet and all the people suffering all around the globe!
Posted by LeDomduVin at 4:33 PM