Cave Cooperative / Wine Cooperative
Cave Cooperatives have always existed and will continue to exist for a while, for the simple and good reasons that not everybody has the mean or the will or even the financial backbone to grow the vines, vinify the grapes and bottle at the property.

Already in the Roman time, wine cooperatives were the easiest way for grape growers to get quick returns from their crop. The grapes were sold per quantity or/and weight and their value depended only on the grape varieties, the trends or/and the quality of the harvested grapes. Once out of their hands the growers could go back home with decent money in their pocket to be able to live for a little while and take care of their family and vines. Other people made the wine and pretty much only the higher classes of the Roman society were able to drink the best of what could be made. Remember that wine was inherent to their way of living, their culture and their festivities. At that time, the rest of the lower quality wine was often flavored with sugar, spice and herbs and stock into amphorae for different purposes and often reserved for the populace.

During the Middle Ages, things didn’t change much. The Roman high society was replaced by the feudalistic ways of the kings and queens. The growers became serfs and the monks became winemakers, and only the king and queen’s entourages were able to really taste the delectable juice produced by their subjects. Yet, here again, the serfs were bringing their crop to the churches and cloisters, which were often, used as local wine cooperatives. The lowest quality wines were still consumed by "le peuple et les gueux” when ever possible.

By the 18th and more especially the 19th century, society somewhat evolved in more civilized ways, yet people and mentality didn’t change and money once again redefined classes. Therefore, it was still the highest in the hierarchy that could (and still can) only afford to drink the best and most refined wines around. Yet cooperative were still quite strong and omnipresent, and were producing most of the wines at the time. Rare were the families that could afford to take care of everything themselves.

Moreover, ageing wine at the property cellar for long period of time was quite exclusive to bigger properties and cooperative with cellar or warehouse; and bottling at the property was a concept that didn't appear until after the second World War, in the 1950s, and wasn't firmly established in most European estates until the late 1970s - mid 1980s.

For these two reasons, cooperatives were very important and have always (even now) had their place on the highest step of the viticulture ladder, way before small growers and producers. They were the saviors of many growers but also small producers, which if their harvest wasn't as good as expected, were selling part of their grapes to the local cooperatives too, to avoid losing their entire crop and the money of the vintage.

Nowadays, cooperatives, which were once so popular and useful to the rich and powerful, tend to be denigrated by the wine snobs and “Bourgeois - Nouveau Riche” owners of the late 20th and beginning of 21st century. It is almost like if they forgot about the past and what they used to represent for the previous generations.

I remember! My late grandfather used to make his own wine for a while but after he uprooted the vineyards when I was about 9-10 years old, he was rarely buying his wine from the local producers, he used to go to the local cooperative where he used to sell some of the grapes from the vines that he tended himself in his younger days. Cooperatives were bringing a sentiment of hope and tradition to my grandfather generation and the generation before that. But the wine “pontes” (important men in old French) of our time don’t even recognize them as local treasure droves that have help some of the most well-known regions to become what they are now.

In my opinion, they will always remain sanctuaries of the traditional winemaking time (that wasn't even so long ago) and of the unity that used to exist amongst growers and producers.

Fortunately for us, regular people, wine cooperatives have experienced an extraordinary renaissance since their bad image years that lasted pretty much up until the mid 1990s. They are memories of the past that are (more than ever, especially in this economy) once again fashionable. Over the last 10-15 years, (here again, and more than ever), with the remaining passionate and the coming of younger bloods eager to succeed and produce their best, cooperatives blew the dust on their logo, transformed or refreshed their label, cleaned their cellars and invested in new technology and marketing to compete and offer world class wines that can easily rival some of the best names out there.

That is the case of St. Michael-Eppan, a south Tyrolean wine cooperative that has been producing outstanding wines at very reasonable price for years and deserves a bit more attention.

San Michele-Appiano winery, which is the old farmhouses of 350 members (growers and producers), is located on the alpine foothill of mount Penegal, at the heart of the impressive vineyard landscape of the South Tyrolean Oltradige region (Alto Adige), with vineyards scattered among the surrounding sunny slopes.

It is the vines growing in these hills and valleys that give the region its unique features and its inhabitants have written their histories into their wine: stories that speak of pristine rural traditions and courageous visions.

Like a fortress the San Michele-Appiano winery towers above the South Tyrolean wine route. Founded in 1907, the winery has come to be one of the largest and most successful wine businesses of Südtirol and, indeed, of Italy. The renowned winery’s members are passionately dedicated to their task and deeply respectful of the gifts of Nature. Numerous international awards testify to the unrivalled success of their unremitting search for quality.

Hans Terzer, chief wine maker of the “San Michele brotherhood“ and widely renowned wine wizard has unerringly paved the way to high quality. Today, the vaulted cellars of the hundred-year-old building store a wide variety of first-class white and red wines, modern labels and time-tested classic wines alike, which are sold to more than 30 countries worldwide.

Their average annual production is approximately 2,600,000 bottles, of which 2/3 are 750ml and 1/3 is 1-liter bottles. Red wines account for 46% of the production and white wines for the remaining 54%. La Schiava represents the lion’s share of their grape varieties; also the red wines, however, such as Lagrein, Cabernet and Merlot, but above all Pinot Noir, are playing an increasingly important role in our range of wines.

Their Pinot Blanc undoubtedly plays a prominent role among the white wines (accounting for 23% of the total production). The vineyards in Eppan and immediate surroundings are the best for the production of this exceptional wine. Sauvignon, Gewürztraminer, Chardonnay and Pinot Gris grape varieties yield great wines too. Müller Thurgau, Riesling and Moscato Giallo also perform well here.

Nearly 9 years ago, when I first arrived in New York, I discovered their Pinot Grigio from the classic label, their entry-level range sold under the name of St.Michael-Eppan, and felt in love with the wine. I have been selling countless amount of this wine since then and still now I can say that it remains one of my favorites Pinot Grigio in the US market. 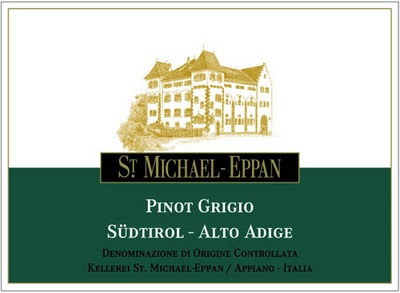 Made with 100% Pinot Grigio grapes from vineyards planted around Appiano and Caldaro, this wine, which after fermentation underwent partial malolactic fermentation to add creaminess and soften the acidity, was entirely vinified in stainless steel tanks, before bottling.

The 2009 vintage, which was across the board in Europe a “Hot” vintage literally and metaphorically, produced warmer, fatter style of wine than usual, with somewhat the similar ripeness profile and characteristic as 2003 and 2005. Yet the 2009 St. Michael-Eppan Pinot Grigio succeed to keep its freshness and zestiness enhanced by great minerality.

In the glass, it shows a pale straw yellow color with light green reflects. The nose is clean, light, fresh and aromatic, boasting rich yellow fruit aromas, mostly pears and citrus with inviting mineral notes. On the palate, this crisp, light to medium bodied white possesses an excellent balance and the combination of the acidity with the minerality gives this wine strength and structure. It is dry and smooth on the palate with a pleasant and inviting persistent finish. It will nicely complement summery salad, grilled or baked fish, but also cold cut chicken or turkey, hummus and Mediterranean specialties.


Their classic range, sold under St. Michael-Eppan label, offers great value for money wines, and this Pinot Grigio is definitely a great example of the high quality that the winery aims for to satisfy its customers.

Another wine that I like a lot from this classic range is their Lagrein, a lesser-known red grape variety that produces beautiful, light, earthy red wine that could be compared with both Pinot Noir and Gamay. 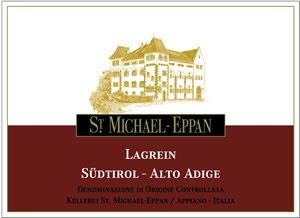 “Lagrein is a red wine grape variety native to the valleys of northern Italy in the Trentino-Alto Adige/Südtirol region, north of Bolzano, near the border with Austria. Along with Marzemino, it is a descendant of Teroldego, and related to Syrah, Pinot noir and Dureza. The name suggests its origins lie in the Lagarina valley of Trentino. It was mentioned as early as in the 17th century, in records of the Muri Benedictine monastery near Bolzano.” -Wikipedia

Made with 100% Lagrein, also called Lagrein Scuro, this wine was crafted from vineyards planted at Gries, a small area of west Bolzano. The grapes were harvested early October from vines tended in both Pergola and Guyot methods. They were fermented in stainless steel tanks before being aged in large wooden casks (probably Slavonian oak).

The 2008 St. Michael-Eppan Lagrein offers a bright ruby-red color of medium to light intensity. The nose is clean, fresh and mineral with vivid aromas of freshly crushed ripe red cherry and other red berries with earthy and mineral notes. The expanding palate is medium bodied and well-rounded with delightful red fruit flavors intermingled with refreshing acidity, cleansing minerality and integrated tannins. The structured and focus finish is quite long and invited for another glass.

This Trentino-Alto Adige/Südtirol indigenous grape variety has grown exponentially in the mind of the American consumers over the last 3-5 years, yet it remains fairly unknown and wine retailers still considerate it as a niche. However, if Pinot Noir and Gamay don’t excite you anymore and you need something new, Lagrein is the way to go. A great summer wine, light, versatile and gentle yet intriguing and layered enough to trigger your interest and amuse your taste buds. I love it.

Info about the winery partly taken and edited from the winery website at www.stmichael.it

Step into the Green! Drink more Biodynamic, Biologique and Organic wines (and spirits and food) from sustainable culture and respect the environment! Support the right causes for the Planet and all the people suffering all around the globe! Also follow projects and products from the Fair Trade, an organized social movement and market-based approach that aims to help producers in developing countries obtain better trading conditions and promote sustainability. Also support 1% for the Planet, an alliance of businesses that donate at least 1% of their annual revenues to environmental organizations worldwide.
Posted by LeDomduVin at 9:39 PM