There are still good bargains to be found in Bordeaux for who wants to search for them. Of course you can always rely on the big names or their second wines, but they rarely come under $25, which, in this economy, can appear a bit expensive. With most people spending $15 and under, above $20 don’t sell as well as only a few years ago. Therefore, the segment of $15 to $20 as become the new place of choice for special occasions and out of the everyday drinking wines pattern.

I first tasted the following wine about 7-8 years ago, during the “En Primeur” campaign, while visiting the Perrin family at Château Carbonnieux and tasting the new vintage at the barrel.

At the time, part of the buying team of PJwine.com, it wasn’t my first time at Château Carbonnieux and as usual, late Anthony Perrin, who passed away at the age of 68 years old in September 2008, received us with welcoming friendly manners and a smiley face, living up to his legendary bonhomie. We tasted Carbonnieux Blanc and Rouge at the barrel as well as previous vintages. Always a great experience and surely one of the best Pessac-Léognan in my opinion!

In the mean time, Eric Perrin, brother of Philibert and son of late Anthony Perrin, introduced us to the wines from his property: Château Haut-Vigneau. I need to admit that I was taken aback by the quality of his wines and the demanded prices.

Since then, I bought most of the last vintages and continue to be impressed by the consistency of his wines. I just bought the 2008 vintage and I’m really please by it.

Especially that it is a fine example amongst these great Bordeaux that you can still find under $20 and remain pretty consistent pricewise year after year, not oscillating to high extreme in good years like so many other Bordeaux.

Chateau Haut-Vigneau Pessac-Léognan Bordeaux France
Situated near the commune of Martillac, about 5.5 kilometers northeast of Léognan and 10.5 kilometers south of the center of Bordeaux driving on the route de Toulouse, this property was originally part of the estate belonging to Baron de Montesquieu.

In 1765, Belleyme, the royal geographer, published a map on which the site “Vigneau de haut” appears to be a plant of land clearly planted with vines. Starting in the mid-20th century, the Perrin family, leaded by Marc Perrin the father of Anthony, slowly acquired a few properties in the Pessac-Léognan area, including Château Carbonnieux, Château Haut-Vigneau, Château Lafont Menaut and Château Le Sartre (since 2004 or 5, owned and managed by late Anthony Perrin's sister, Marie-José Leriche with the help of her husband René and their manager and winemaker David Château).

Nowadays, Eric and Philibert Perrin continue with assiduity the work of their late father at Château Carbonnieux, which belongs to their mother. Yet, they respectively inherited their own Château: "Lafont Menaut" belongs to Philibert and "Haut-Vigneau" to Eric, were both also spend a good amount of time, out of their responsibility regarding Carbonnieux.

In the early1980s, Eric took over the management of Château Haut-Vigneau and began the long-term work of clearing the land and replanting the vineyard from scratch. The property was in really bad shape, but Eric focused the last 10-15 years renovating it completely and reestablished its vineyard. With its remarkable situation, its Terroir of choice, and after somewhat recent, careful work in both vineyard and vat room, Château Haut-Vigneau can now compete easily with more reputed wines.

With oenological advice from Christophe Olivier, who works closely with Prof. Denis Dubourdieu, Eric Perrin strives to produce a truly classic great wine, expressing both the power and the finesse of its fruit.

Similar to Château Carbonnieux, vinification and winemaking at Haut-Vigneau are based on great respect for the grapes, the vines, the environment and the specific Terroir composed of deep “Garonnaise” gravel (a mixed of dirt and multiple small round pebbles and sea shells anciently rolled over and deposited by the "Garonne" river atop a calcareous subsoil), together with careful and traditional long oak aging in 20% new barrels. 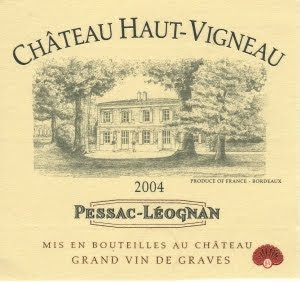 The vines are cultivated according to environmental friendly growing practice, in respect for the plants and their surroundings, and consequently the soil. A blend of hand harvested and carefully sorted grapes, 60% Cabernet Sauvignon and 40% Merlot, from south exposed and gently sloped vineyards planted on a naturally drained gravelly-calcareous soil, this wine was fermented and vinified in stainless steel vats for about 20 days, before ageing process occurred in oak barrels (20% new) for 15 to 18 months. 120,000 bottles were produced and mostly sold to the export market with major distribution in USA, Great Britain, Germany and Japan.

2008 Château Haut-Vigneau Pessac-Léognan shows a medium to deep lovely dark ruby color. The nose is clean, earthy and warm with ripe dark berry, black currants and blackberry aromas intermingled with liquorice, spice and slightly toasted oak notes. The palate offers interesting structure and texture with the same type of black fruits and grilled oaky flavors, enhanced by integrated acidity and framed by smooth, yet touch green, distinct tannins. Some may recognize the earthy, tobacco leaf, smoky character of this wine, which is typical to great Terroir driven Pessac-Léognan.

Some may see that as a default or may not find that very attractive, yet the juiciness of this wine tremendously compensate for it. And if you're still not convinced, as a food friendly wine, try to smooth it down with an aeration of about an hour in a decanter, then taste it over an earthy dish like “grilled Magret de Canard served with Ceps and Pleurottes sautéed with garlic and parsley”.

It is maybe sentimental, because I grow up the first 6 years of my life in Pessac, and obtained 18 years later my Sommelier diploma in the Catering College of Talence and sold a lot of Carbonnieux in my career; or even because I knew Mr. Anthony Perrin and his sons after eating at the Château and tasting the wines at the barrel with them quite a few times over the last 14 years; or even because when I first started as a waiter-commis Sommelier, I served Mr. Perrin quite a few times in the Relais-Château where I used to work…

... However, it is definitely in memory of his late father, who was the inspiration for all the hard work invested by Eric Perrin to revamp his property, continue the family tradition of excellent winemaking and attention to details with the gentle bonhomie inherent to the Perrin’s family and produce top quality Pessac-Léognan wines. I liked it a lot and I hope you will too!

Info partly taken and edited from the Château website at http://www.haut-vigneau.com

Step into the Green! Drink more Biodynamic, Biologique and Organic wines (and spirits and food) from sustainable culture and respect the environment! Support the right causes for the Planet and all the people suffering all around the globe! Also follow projects and products from the Fair Trade, an organized social movement and market-based approach that aims to help producers in developing countries obtain better trading conditions and promote sustainability. Also support 1% for the Planet, an alliance of businesses that donate at least 1% of their annual revenues to environmental organizations worldwide. "Commerce Equitable" or "Fair Trade" is evidently and more than ever a needed movement connecting producers and customers, to be aware of others and their cultural and traditional products based on high quality, natural components and craftsmanship.
Posted by LeDomduVin at 11:46 PM