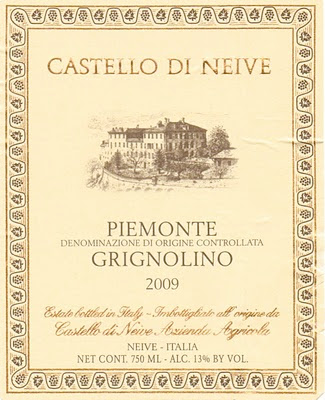 I need to admit that we buy so many wines, when buying time season reaches its peak between October and November, that sometimes I forgot about certain wines we bought just a few weeks ago.

It was the case for the following wine. We bought it earlier during the season but I totally forgot about it and only rediscover it about a week ago, when we decided to open a bottle in the store for our customers but also to refresh our memories. What a blast! This wine is great!

Therefore, as always in my humble quest to make you discover lesser known regions, wineries, producers and wines from around the world, I decided to get a closer look behind the label and share my experience of this little gem.

This hilly region represents the northwestern part of Langhe, bordering the southern part of Roero. The village of Neive is part of Barbaresco DOCG, which is covering a radius of about 12-15 kilometers northwest and west of the town of Alba. The communes of Barbaresco, Neive and Treiso form the three angles of the renowned triangle of lands, rolling hills and vineyards, which encompass Barbaresco DOCG.

Owned by the Stupino brothers and sisters, Castello di Neive remains one of the most traditional producers of Barbaresco and Piedmontese in general, producing earthy, complex and characteristic wines with very approachable profile, reflecting the commitment, ambition and passion of the family in all of their wines, one generation after another.

Anna, Giulio, Italo and Piera Stupino were all born in Neive, and so were their parents, grandparents and great-grandparents. The history of the winery began when their father, Giacomo, started to capitalize on both his experience as a surveyor and on his knowledge of the area, and to purchase, whenever possible, vineyards and land in extremely favorable locations.

Nowadays, the150 acres (about 60 hectares) of Castello di Neive estate, which also include vineyards in Santo Stefano and Marcorino, are scattered all around the town of Neive, in the Langhe area of the Piedmont region. Sixty-two acres (25 hectares) of the property are devoted to grape growing and all the production, which amounts to an average of 12.000 cases a year, is obtained from Castello di Neive’s own vineyards.

Back in the 60s, in the small cellars of their home, Giacomo and his family began the first production of wine for domestic consumption and to sell in bulk. Giacomo slowly acquired a number of vineyards like Messoirano, Montebertotto, Basarin, Valtorta and Cortini. The estate grew and with it also the production and the ambitions of the family.

In 1964, they purchased the Castle of Neive with its spacious cellars, as well as more farmsteads in Santo Stephano and Marcorino, plus more land from the castle’s previous owner, Count Guido Riccardi Candiani.

The history of the Castle bring us back to the beginning of the 18th century, when the Count of Castelborgo, Manfredo Bongioanni, decided to build the new castle over foundations dating back to the 16th-17th century. The imposing structure is situated in what, in medieval times, had been Neive’s south-western border; also a defensive wall completed with sentry boxes still links the castle and its gardens to the Southern Gate of the town.

However, (back to the family history), purchasing the Castle in the mid-60s was a turning point, which urged the Stupino family to renovate the castle’s cellars, to reorganize the vineyards neglected by the previous owners and to produce wine according to modern methods. When Giacomo died, in 1970, Giulio and Italo oversaw the transition from tenant farming to direct management of the land, with the precious help of Talin Brunettini, a skillful cellar man with knowledge in agronomic techniques. It is at this time that Castello di Neive began to bottle its wines and to introduce them to the rest of Italy and abroad.

In 1978, came another rewarding step: thanks to the collaboration between Italo and some experts from the University of Turin – professors Italo Eynard and Annibale Gandini – Castello di Neive started a clonal selection programme of Arneis, a white grape long forgotten and abandoned because of its scarce productivity and lack of knowledge in white wine vinification. Arneis wine owes its rediscovery to this joint effort by the company and the University. In the past few years, Italo has devoted himself fully to the direct management of the company, under the name “Castello di Neive Azienda Agricola”: a devotion which seems to follow a ‘premonition’ contained in an old photograph depicting Mentor, Italo’s grandfather, presenting a grapevine to his young nephew.

The castle’s cellars – where wine is still produced and bottled – were purposefully designed to serve the same function they do nowadays. They have very high ceilings to allow the use of large oak vats, usually Slavonian oak. In these cellars, during the 19th century, the French oenologist and wine trader Oudart was operating as a consultant of the Count of Castelborgo. He was the first one in the area to obtain a dry, stable and therefore easily exportable wine from Nebbiolo grapes: he called it ‘Neive’ and in 1857 this wine won a gold medal in London. About thirty years later, Castello di Neive’s first Barbaresco was produced using the same techniques employed by Oudart.

Nowadays, Italo Stupino is taking care of the winemaking, helped by the university of Turin and his daughter Carolina. Due to his training as an engineer and to his previous activity in other fields too, Italo developed a scientific approach to the vineyard and to the countryside. Preserving tradition is one thing, but one can never take anything for granted and always must strive for better results. Questioning, researching, trying and learning: since the 1970’s the collaboration with the University of Turin has allowed Italo to enter the world of wine with a frame of mind which, still nowadays, enables him to face the challenges of a continuously evolving market. Tradition, research and creativity: this is the philosophy of a company which, without overlooking the heritage of centuries of winemaking, embraces new technologies, is active in the field of research – both in the vineyard and in the cellars – and is ready to take risks and to experiment.

Castello di Neive produces mainly red wines from principally 9 different characteristic vineyards and crafts about 15-17 different wines, depending on the year, with classic Piedmont labels such as Arneis, Barbera d’Alba, Dolcetto d’Alba, Langhe, Moscato d’asti Vino Spumante, Passito, a Pinot Nero and of course Barbaresco from their Santo Stefano vineyard. But before I forgot, they also produce this great little wine that triggered the post of today: “Piedmonte Grignolino”.

I know what you’re thinking: what is Grignolino? Well like you, I wasn’t necessary very acquainted with this grape variety until today. I may have read about it in my numerous wine books. However, it is quite strange that I never drank a wine made from it before because, as you may know by now, I love earthy, crispy wines with bright features, enhancing acidity and fresh fruit with a lot of minerality and good tannic structure, I drink a lot of Piedmont wines.

They happen to be amongst some of my favorite red wines with Bordeaux (where I come from), but also and more especially Loire valley, Burgundy, Southwestern France, Jura, Savoie, a lot of Languedoc earthier style, Rioja, Priorat, Monsant, Terra Alta, Ribera del Duero, Tuscany, Campania and quite a few more (I love wines, what can I do about it…).

Never mind, so what is Grignolino? Grignolino is a red Italian wine grape variety commonly grown in the Piedmont region. It produces light colored red wines and rosés with very fruity aromas, strong acidity and tannins. The name Grignolino derives from the word “grignole” which means "many pips" in the local Piedmontese dialect of the Asti region. The abundance of pips, or seeds, contributes to the obvious, slightly green bitter tannins associated with the wine. Modern winemakers try to avoid the excess tannins with gentle and slow pressings, to avoid crushing the pips, which also release the green bitterness from the seeds. Grignolino wines are more commonly produces in two “Denominazione di Origine Controllata (DOCs): Asti and Monferrato Casale, yet the wine of today is just a generic Piedmont Grignolino DOC.

This Piedmonte DOC Grignolino, produced in the area of Neive, Langhe (Piedmont, Italy) was crafted from carefully hand-harvested grapes from the Messoirano Vineyard, in the Serracapelli sub-region, benefiting from East – Southeast exposure. The grapes come from 0.19 hectare of vines averaging 25 years old, which are planted on calcareous-marl soil. Believe it or not but only 1,500 bottles of this delicious wine were produced, so considerate yourself lucky to get some (which makes me think that I need to reorder some ASAP... hope I'm not too late!)

Hand-harvest usually occurs in mid-September. Grapes are carefully selected and sorted, than carried in small plastic boxes to avoid crushing under pressure. The vinification is traditional with automatic pump over. Fermentation last about 8-10 days. Maceration usually occurs for 5 days in large oak barrels. Followed by a 3 months resting period in stainless steel tanks. Once bottled, this young, fresh, aromatic wine is kept in the Castle's cellar for an additional 3 months before release.

2009 Castello di Neive Azienda Agricola Piedmonte DOC surely benefited of the warm ripening season of this particular vintage and, although rather light yet fairly ripe, the resulting wine is fresh, really inviting and charming. It is already pretty startling by its color, presenting a very light rosé-esque, cherry color. The nose shows a lot of bright red cherry aromas with earthy and mineral hints. The delightful palate is super light bodied wine with fresh tart red cherry and raspberry flavors intermingled with enhancing acidity and a mouthful of minerality. This bold acidity and cloak of ultra smooth, integrated tannins make it quite unique and vibrant.

If you’ve never tried a Grignolino wine, this one is a fine example of what this fresh, light and tart, rather undiscovered (in the US market) red grape has to offer. Very versatile and ultra approachable and immediately commanding for another glass, it will pair well with pretty much anything from charcuterie, pizzas and red-sauce pastas, to light appetizers or just as an aperitif after a long day at work or else where. Highly recommended for any occasion. Try it! You’ll tell me, but I think this was a great discovery, somewhat in between a Beaujolais and a very light Burgundy, yet with the Piedmontese traditional touch.

Info partly taken and edited from the winery website at www.castellodineive.it

Step into the Green! Drink more Biodynamic, Biologique and Organic wines (and spirits and food) from sustainable culture and respect the environment! Support the right causes for the Planet and all the people suffering all around the globe! Also follow projects and products from the Fair Trade, an organized social movement and market-based approach that aims to help producers in developing countries obtain better trading conditions and promote sustainability. Also support 1% for the Planet, an alliance of businesses that donate at least 1% of their annual revenues to environmental organizations worldwide. "Commerce Equitable" or "Fair Trade" is evidently and more than ever a needed movement connecting producers and customers, to be aware of others and their cultural and traditional products based on high quality, natural components and craftsmanship.
Posted by LeDomduVin at 10:38 PM