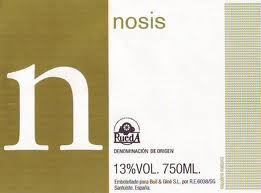 2009 Buil & Giné “Nosis” Verdejo Rueda Castilla y León Spain
Although this wine called “Nosis” is from Rueda, it seems that the adventure of the Buil & Giné debuted in the south of Catalonia during the Winter of 1996, when the family decided to go back to wine elaboration in the Priorat region.

Before winemaking strikes back, the Buil & Giné family has been, until fairly recently, active in the food retail business. Before that, both their grand and great-grand parents had been wine makers and merchants. Making wine was only a logical mix of suites and decisions that were bound to resurface.

Bringing this tradition back to life, the present generation is dedicated to growing grapes and producing wine in both local southern Catalonian “Denominación de Origen” (DO): Priorat and Tarragona-Falset.

This dream started to materialize during the Spring of 1998 when they introduced their first wine, “Giné Giné” 1997. The name of this first wine consists of the grandfather last name repeated twice, because he was both a wine grower and the President of the Cooperativa Agrícola Falsetenca, elected twice for the quality of his work.

Obviously, ambition and opportunities, lead them to expand their business to other regions, because, outside of Priorat and Monsant, they also now produce wines from Toro and Rueda, which, for the latter, we will concentrate on for the post of today.

Rueda is a Spanish wine Denominación de Origen (DO) located in the “Castilla y León”, centered around the town of Rueda, in the province of Valladolid about 170 km northwest of Madrid. Rueda represents a flat high plain at an altitude of between 600 and 780 m above sea level, where the Duero river flows through the area from east to west.

With traces in History going back to the 11th century, like most European regions under Christian rules, where monks produced wines for the mess and the ruler of the lands, Rueda has been a wine region for a long time. Through out history and especially around the beginning of the 20th century, it appears that Rueda was producing, amongst other whites, sherry-like wines from the Palomino grape, but for the most part Rueda has always been the land of Verdejo.

Between roughly 1860 and mid 1930, while the Phylloxera louse destroyed over two thirds of the vineyards in most European countries, it also came to Rueda where it was the most devastator between 1890 and 1922.

After what, vineyards were slowly replanted by grafting vines shouts onto louse resistant New World rootstock(s) coming from America, paradoxically the country where the bug originally came from.

However, new grape varieties were selected and grafted according to productivity criteria rather than quality ones and for many years the wine produced in Rueda was sold in bulk (like in many other places across Europe between World War I and the end of 1960’s, when you really think about it). Sauvignon Blanc, Viura and Palomino Fino were planted at that time, nowadays continue to actively share the region alongside the king Verdejo.

The idea of creating a DO was first raised in 1935 but it was not until 1972 that major investment by the Rioja winery, Marqués de Riscal, signaled the start of a second era of quality wine production, again based on the Verdejo variety. Official DO status was acquired in 1980.

The Verdejo grape, grown here for centuries, experienced a great renaissance by the 1990 when it was found again to create enjoyable and approachable dry, refreshing white wine. The Verdejo variety currently occupies more than half the vineyards in the region of Rueda. It is vigorous and rustic, showing its true splendor when vinified around 13 degrees of alcohol.

Today, Rueda is second only to Rias Baixas in reputation for white wine production in Spain and generally around the world in Spanish wine retail sales. The climate, soil and winemaking tradition along with affordable pricing have generated a renewed interest in the area, and consequently its wines.

The climate of Rueda is one of the coldest parts of Spain in the wintertime and one of the warmest in the summer. The result is a long dormancy for the vines and then quick ripening so the grapes have an optimum balance of fruit and acidity, resulting in fresh and cleansing whites with Sauvignon Blanc-like attitude and character. Therefore, it isn’t surprising to often hear that Verdejo is the Sauvignon Blanc of Spain.

Made of 100% Verdejo grapes manually harvested from “Fuente la Miel”, a 35 years old Verdejo vineyard near the town of La Seca, in the Valladolid province, where vines are planted on terraces overlooking the Duero River, with sandy-rocky soil above clay subsoil, this exquisite Verdejo from Rueda offers captivating nose, boasting delicate vegetative aromas, anise and hay. It was fermented in 100% stainless steel tanks after it underwent a criomaceration at 8º Celcius to extract maximum fruit aromas and flavors. On the palate, it is clean, juicy, fresh and vibrant with white core fruit and citrus flavors expanding toward a characteristic grassy, slightly bitter, limey finish, enhanced by a good amount of minerality which adds elegance and personality. A classic Verdejo from old vines that delivers agreeable, crisp sensations to pair with white fish from river and sea, but also with chicken and other white meats, along with green salad, goat cheese and a wide array of shellfish.

The rest as always is personal knowledge from various visit in Spain and a lot of reading and analyzing, which are both keys to full comprehension of the wine, its region of origin and the culture and the people that surround it.

Step into the Green! Drink more Biodynamic, Biologique and Organic wines and spirits and food) from sustainable culture and respect the environment! Support the right causes for the Planet and all the people suffering all around the globe! Also follow projects and products from the Fair Trade, an organized social movement and market-based approach that aims to help producers in developing countries obtain better trading conditions and promote sustainability. Also support 1% for the Planet, an alliance of businesses that donate at least 1% of their annual revenues to environmental organizations worldwide. "Commerce Equitable" or "Fair Trade" is evidently and more than ever a needed movement connecting producers and customers, to be aware of others and their cultural and traditional products based on high quality, natural components and craftsmanship.
Posted by LeDomduVin at 9:28 PM