Last week, my rep. from Metropolis Wines came with a few organic, natural wines, including 3 that I really loved and bought on site. One was from the Loire, the other from Buzet and the last one was a white from Piedmont. Each of them will have their post, but let’s start with the white from Piedmont, which was intriguing yet really, really good.

2009 Vigneti Massa Derthona Timorasso Colli Tortonesi DOC White Piedmont Italy (Organic - Sustainable)
At first, I didn’t pay so much attention to the label; I was just trying the wine based on the fact that it was from Piedmont, which happens to be my favorite Italian wine region.

Piedmont is surrounded to the north by the Alps, and overlooked by 2 mounts: Monviso (Mont Vis), where the Po rises, and Monte Rosa. The region borders France to the west, Valley d’Aosta to the northwest, Switzerland to the north and the Italian regions of Lombardy to the east, Liguria to the south, and a very small fragment with Emilia Romagna to the southeast. The geography of Piedmont is nearly half mountainous, along with extensive areas of hills and plains. Most produced wines, whether red or white or rose, are usually earthy and Terroir driven, expressive, traditional and complex with a good dose of minerality, due the prominent mountainous rocky soil.

So far, nothing abnormal or unusual, yet I had to look more closely at the label. Something intriguing caught my eyes: Derthona Timorasso? What was that? Never heard or taste it before.

"Derthona"? Despite the fact that it is the name of this wine and the regional dialect name for “Tortona”, “Derthona” is also the name of the local football club of Tortona, a little town of Piedmont nearby to where the wine also come from, which gave the eponymous name of “Colli Tortonesi” to the hilly region surrounding it and also the DOC name (Denominazione di Origine Controllata), in the province of Alessandria, about 30 kilometers north of Gavi and 60 kilometers east of Asti.

"Timorasso"? You probably rarely heard of it because it is not wildly planted, but “Timorasso” is a local, indigenous white grape variety from Piedmont, producing fresh, crisp, complex and rich, Terroir oriented whites of great minerality and acidity (and sometimes of high alcohol content). Usually fatter than Arneis and Cortese, the resulting whites (made from Timorasso) have a somewhat similar profile, in term of texture and way of coating the palate, to Falanghina or Greco, both grapes usually expressing the complexity of the volcanic soil of Campania. Do not worry if you never heard of Timorasso, because, while France counts about 50 different grape varieties, it is said that Italy counts about 2,000, including about 30 in Piedmont alone. Many being indigenous and unheard of outside the boot!

Now that I had a better picture of the wine, the grape and where it came from, something else intrigued me. Between the word “Derthona” and “Timorasso” lay the words: “un territorio, un vino, in vitigno”, which literally translate by: “one Terroir, one Wine, one Vine” (or in French: “un territoire (ou Terroir), un vin, une vigne”). It could have been the ego of the producer to show certain uniqueness, but after investigating and asked a few question to my rep., I realized that it was more to his pride that these words were referring to. Let me explain.

"Timorasso" was an endangered specie of a grape variety, that would have vanished from the Colli Tortonesi, if it wasn’t for the tenacity and determination of Walter Massa, the owner of Vigneti Massa, who clearly believed in the tremendous potential of this grape variety, which about a decade ago was on the edge of extinction, with only a few hectares remaining. Yet, alone and against all odds, he continued to produce it, until it was once rediscovered a few years ago and started to have a new following on the export market (UK and USA predominantly).

That is why he is so proud to mention on his label “one Terroir, one Wine, one Vine”, because without him and his remaining vineyard, you will not even be able to taste this delightful white from this amazing grape variety. This is his baby, and one can literally say that he is the father of the renaissance of this Sommelier and gourmet sensation, which have, over the last few years, received many accolades and acclaims from connoisseurs, amateurs and critics around the world.

Vigneti Massa is located in the abandoned hill top town of Monleale Alto, perched at around 200-300 meters, in the Colli Tortonesi, about 10 kilometers east of Tortona. Walter Massa, producer and winemaker extraordinaire, inherited the family knowledge and skills, which have been inculcate from one generation to the next since 1879. Despite his unique white made from Timorasso, Walter also craft some reds with the local grapes: Croatina, Barbera, Freisa and Nebbiolo. Four of his wines are available in the US market.

I invite you to go to the importer website for more info at http://www.portovinoitaliano.com/wineshop/producers/vigneti-massa 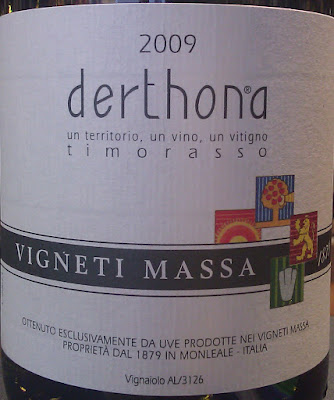 2009 Vigneti Massa Derthona Timorasso shows a pale, yellow color. The nose is fresh and inviting with expressive aromas of blossom, peach skin and yellow fruit, mingled with herbal, floral touches and mineral nuances. The palate is also fresh, clean, and fat without being heavy, rich, complex, yet well balanced and lush, with great acidity. Inciting flavors of yellow apple, pear and citrus expand nicely toward the very long, mineral, spicy, peppery finish. It even shows good ageing potential. I will not speculate for too long, but it will definitely hold on tight for the next 2-3 years, may be 5. I love it.

Highly recommended. Serve it chilled but not cold on hearty dishes based with fish, white meat, game and poultry.

Step into the Green! Drink more Biodynamic, Biologique and Organic wines and spirits and food) from sustainable culture and respect the environment! Support the right causes for the Planet and all the people suffering all around the globe! Also follow projects and products from the Fair Trade, an organized social movement and market-based approach that aims to help producers in developing countries obtain better trading conditions and promote sustainability. Also support 1% for the Planet, an alliance of businesses that donate at least 1% of their annual revenues to environmental organizations worldwide. "Commerce Equitable" or "Fair Trade" is evidently and more than ever a needed movement connecting producers and customers, to be aware of others and their cultural and traditional products based on high quality, natural components and craftsmanship.
Posted by LeDomduVin at 1:13 AM