Lagar da Xestosa Godello & Mencia Monterrei D.O. Galicia Spain
Lagar da Xestosa is a joint venture between Adegas Pazo das Tapias (the winery) and “The Wine Searchers”, Ramon Romero & Eric Miller, two wine aficionados, passionate about Spanish wines, who recently decided to put together an importing/distributing company in Maryland, in order to share their passion and their finds. Their office in Spain is registered at Puente La Reina, a commune of the Navarra region, south of San Sebastian.

Lagar da Xestosa, which comes in both red made from Mencia and white from Godello grapes, the two classical Galician grapes, is produced and bottled by Adegas Pazo das Tapias, a winery located close to the northern boundary of Portugal, in Pazos, a village on the west outskirt of Verin, Galicia.

Located in the northwestern corner of Spain, above Portugal, Galicia produces some of the driest and most exquisite white wines in Spain, as well as some great, very enjoyable reds resembling in structure and texture to some of the Cabernet Franc based reds from the Loire Valley in France; yet with a bit more fruit and softer, better integrated tannins. Galicia benefits of an oceanic climate, which is ideal for the production of whites, more especially when it comes to the 2 most famous and established Galician grapes: Albariño and Godello.

Galicia is composed of relatively low mountains and rolling hills without sharp peaks, where many rivers run down relatively gentle slopes in narrow river valleys, though at times their courses become far more rugged as in the canyons of the Sil River, Galicia's second most important river after the Miño. Topographically, a remarkable feature of Galicia is the presence of many firth-like inlets along the coast, estuaries that were drowned with rising sea levels after the ice age. These are called Rías and are divided into the smaller Rías Altas ("High Rías"), and the larger Rías Baixas ("Low Rías"); the region responsible for the success of the Albariño grape variety.

Outside of Rías Baixas along the west coast, Galicia also encompasses other wine regions all along the way toward the neighboring ancient kingdom of Castilla y León, respectively from west to east (and south to north): Ribeiro, Monterrei, Ribeira Sacra, Valdeorras and Bierzo. In these DO(s), Godello is preferred to Albariño, because it is more adapted to the type of soil and climate inland to produce white of very good quality.

Adegas Pazo das Tapias is located in Pazo, a village on the outskirt of Verin, in the Monterrei D.O. (Denominación de Origen). Monterrei is a Spanish DO (Denominación de Orixe in Galician) for wines located in the southeast corner of the Ourense province in (Galicia, Spain). Monterrei DO covers the municipalities of Verín, Monterrei, Oimbra and Castrelo do Val. Long a neglected DO, Monterrei experienced a renaissance in the mid-2000s, which revived the appellation and triggered the curiosity of critics and amateurs from all around the world.

In 2006, the Mendez family, strong of 40 years of world class winemaking experience, bought the winery, Adegas Pazo das Tapias, and its vineyards. Pazo dasTapias is nestled in the middle of its own vineyard, and encompasses probably some of the best vineyards of the appellation due to the age and healthiness of the vines.

The vineyard was planted in the early80's with innovative techniques and only two indigenous grape varieties: Godello and Mencia. The vineyard shows clearly two different types of soil, sandy slope planted with Godello, where the bright soil and reflections from the quartz maximize the concentration of the Godello; and areas planted with Mencia reaching perfect phenolic ripeness indicate the great potential to develop breeds and stocks with these grapes. Combined with hard and rigorous work in the vineyard and taking in consideration the excellent location of the vineyard, the winery can only provide excellent quality grapes.

The Bodega’s current capacity of production is 350,000liters, which receive adequate treatment with state-of-the-art technology, including: modern pneumatic presses, fermentation in stainless steel tanks, and a range of French oak barrels from the forest of Allier, into which the Bodega experiences different ageing processes for the Mencia reds.

The climate of the D.O. Monterrei can be summarized as a mixture of continental and Atlantic climate, with generous rain fall throughout the year, very hot days in summer and very cold days in winter. Monterrei is the warmest and driest appellation within Galicia. Its vineyards sit between 396-500 meters (1300-1650 feet) above sea level on the Duero river basin and benefit from its ideal wine growing climate conditions.

The Bodega’s vineyard area totalizes more than10 hectares of vines, planted at an altitude of 450 meters above sea level. The average climate temperature during the year is about 12.60 degrees Celsius, which is quite ideal and consistent. And the average number of hours of sunshine per year is about 2700 hours, which is perfect to reach appropriate ripeness. 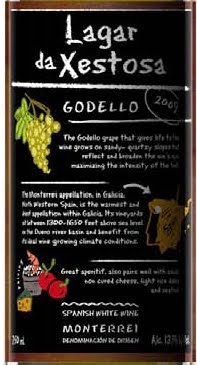 Made with 100% Godello vinified in stainless steel tanks, grown on sandy-quartz filled slopes that reflect and broaden the sun's rays, maximizing the intensity of the fruit.

Behind its pale yellow-greenish color, the nose is clean and fresh, with zesty aromas of white fruit, tropical fruit, lime and lemon with floral and mineral notes. The palate is super crisp, light, bright yet fairly silky with excellent structure, harmony and enhancing acidity, nicely carrying the fruit toward the lingering finish. Great aperitif, also pairs well with salads, cheese, light rice dishes and seafood. 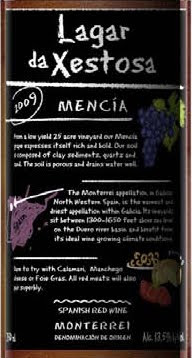 Made from 100% Mencia grapes vinified in stainless steel tanks, grown on sandy-quartz filled slopes that are composed of clay sediments, quartz and sand. The soil is porous and drains water well. It reflects and broadens the sun's rays, maximizing the intensity of the fruit.

It presents a dark ruby color. The nose is beautiful, elegant and expressive, developing aromas of ripe blueberry and blackberry with earthy, floral, purple flowers notes. The palate is extremely juicy, clean, soft and integrated, really well crafted, long and elegantly fruit forward, with earthy, lightly green hints. A crowd pleaser like the white, it will certainly satisfy Cabernet Franc drinkers and agreeably surprise others. Versatile and neither too light or to heavy, it is a good go to food friendly red wine for any occasion.


Step into the Green! Drink more Biodynamic, Biologique and Organic wines and spirits and food) from sustainable culture and respect the environment! Support the right causes for the Planet and all the people suffering all around the globe! Also follow projects and products from the Fair Trade, an organized social movement and market-based approach that aims to help producers in developing countries obtain better trading conditions and promote sustainability. Also support 1% for the Planet, an alliance of businesses that donate at least 1% of their annual revenues to environmental organizations worldwide. "Commerce Equitable" or "Fair Trade" is evidently and more than ever a needed movement connecting producers and customers, to be aware of others and their cultural and traditional products based on high quality, natural components and craftsmanship
Posted by LeDomduVin at 12:17 AM