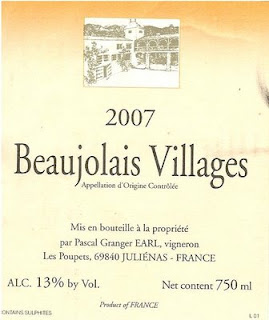 Distributed by Rosenthal in NYC

The Granger family has been involved in the production of grapes and the making of wine from father to son for over 200 years. Originally from the village of Chenas, for the last century the Grangers have lived and worked in Julienas. Pascal Granger, born in 1961, is now the owner and winemaker and guiding spirit behind the Domaine. He mainly produces

Julienas where he possesses about 8 hectares, plus a small amount of Chenas, Moulin a Vent and Beaujolais Villages. After a careful selection from his best parcels of vines, he separates the wine destined to be the "Grande Reserve" from the cuvee designated "Cuvee Speciale". These special wines are usually aged longer in barrel, the Grande Reserve remains in small oak barrels for two years prior to being bottled without filtration.

His 2007 Beaujolais Villages is amazingly attractive, bright, balanced, harmonious and delicate. Its juicy, red fruit character intermingled nicely with elegant acidity and pure mineral texture. Like most of his wines, this Beaujolais Villages has high quality profile and taste. Love it.

Step into the Green! Drink more Bio and Organic wines (and Food) from sustainable culture and respect the environment!

Posted by LeDomduVin at 6:06 PM