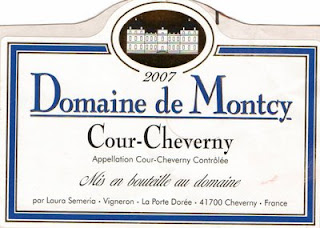 Welcome back to one of my summer places of choice for light, vibrant and refreshing whites, rosés and reds: Loire Valley.

Often called the "Garden of France", Loire Valley is an enchanted land covered by vineyards, flowers and gently rolling green hills dotted with more than a thousand Châteaux, on both side of the Loire River.

All along the river, sumptuous Châteaux and "Maison(s) Bourgeoise(s)" surrounded by maze of amazing French and English gardens, flower parterres, vineyards and quaint, scattered little villages, share the 1000 kms (629 miles) of the Loire River banks.

France's longest river serpents and extends from its source located near the Mont Gerbier de Jonc (a mountain located in the "Massif Central" in France, rising to an altitude of 1,551 m -5,088 ft-, and giving birth - at its base- to three springs that are the source of the Loire River), passing through the towns of Roanne, Orleans, Blois, Tours, Saumur, Angers and Nantes to where it ends and reaches the Atlantic ocean in the Bay of Biscay at St. Nazaire.

After a few days visiting the Loire Valley and its treasures, you will realize that it is probably the charm and the beauty of its gentle, paced life and landscape that have, for centuries, made the Loire Valley a sought-after location and destination for kings, land lords, musicians, poets, writers and other artists, and nowadays tourists. People in quest for quietude are at peace in this incredible environment where nature and architecture intermingle and reside magnificently. It is a step back through the history of some of France's finest works of art and architecture.

Cheverny and Cour-Cheverny are two small communes, close to each other and often shorten by "Cheverny" only, nestled in the Loir-et-Cher departement (county) in central France, renown for their wines and the famous Château de Cheverny. FYI: If your are keen amateurs of architecture, Cheverny is surrounded by some of the most beautiful Châteaux of the Loire, i.e.: Cheverny, Blois, Chambord, Troussay and many more.

Cheverny produces refreshing whites usually made with Chardonnay and Chenin Blanc, but also some light, earthy reds are made from Cabernet Franc, Gamay and Pinot Noir, while Pineau d'Aunis and Grolleau are allowed for the small quantities of rosé wine produced.

Cour-Cheverny village lies in the Loire valley, north-east of Tours and about 12 km (7.4 miles) southeast of Blois and about 1.3 km (0.8 miles) north of Cheverny, on the road to the village of Romorantin-Lanthenay, where the Romorantin grape supposedly took its name from.

Romorantin is a French traditional white grape variety, which, after results of DNA researches appeared to be a cross between "Gouais Blanc" and "Pinot fin teinturier" grapes, making it a sibling of Chardonnay and Aligoté. Legend has it that Romorantin was introduced to the Loire Valley by French King François 1er, an important figure of France and Loire more especially in the early 16th century. Once quite widely grown in the Loire Valley, Romorantin is now mainly planted and produced in the Cour-Cheverny AOC. It produces intense, bright yet well rounded, mineral wines somewhat reminiscent of Chablis by the acidity, Meursault for the complexity and richness, and Vouvray for the rounded, waxy coating palate.

Domaine de Montcy is an estate of 20 hectares, located in a "Lieu dit" ("a place known as" in English) called "Voie de la Porte Dorée" (or "Porte Dorée"), about 4 kms to the southwest on the out skirt of Cheverny. (A "Voie" refers to an ancient road, usually small, that could even be only dirt, and represents the old path traced by our ancestors over the centuries).

Domaine de Montcy is now owned by Laura Semeria, born in Italy, who followed the steps of her French husband Léonard across France to finally stop near the Loire River. Dreaming to buy a wine estate and after months of searching in vain in Italy, it is, after all, the small appellation of Cheverny that opened its arms to her. She found an estate for sale with a very welcoming owner and a promessing vineyard, and decided to buy it. This new acquisition allowed her to settle down in Cheverny, near the Château de Troussay of which the Domaine de Montcy now manages the old vines and the ancient vineyards of the Château.

Since 2005, Domaine de Montcy's vineyards management is under "agriculture raisonnée" (or sustainable culture, with an organic approach), a system of durable agriculture concerned and respectful of its environment (soils, vines, plants, herbs, insects, etc..), to produce better and more natural wines from carefully attended vines resulting in higher quality grapes. The cellar is also equipped with state of the art vinification tools allowing minimal intervention to craft more authentic wines. The only objective of the Domaine is that the 120.000 bottles sold each year offer and reveal the best of their Terroir, grape variety and climate of origin.

Carefully crafted with 100% Romorantin grapes exhibiting a typical expression of the clay-siliceous Terroir of origin, the racy and rich in aromas "Domaine de Montcy Cour-Cheverny" is produced in tiny quantities, thus it is very appreciated and sought after by both the amateurs and connoisseurs. De Montcy makes two wines from this little appellation: Cour-Cheverny (today's wine) and a higher cuvée from older vines and selected parcels, Cour-Cheverny Cuvée "Claude De France".

Issued from their best vineyards in Cheverny, and more especially Cour-Cheverny (for today's post), Domaine de Montcy also applies a rigorous parcel selections of their Romorantin's vineyards and hand harvest with successive sortings to pick the grapes at ideal fruit ripeness and phenolic maturity. Under "culture raisonnée" (or sustainable culture), the vinification and ageing processes are natural and particularly adapted to each batch of grapes, with indigenous yeast and no use of any industrial yeasts or enzymes. Hygiene conditions are maximal in the cellar, which allow for minimum use of SO2 (Sulfur Dioxide) and fuller flavor expressions.

Clear, pale, medium intensity, yellow color with golden reflects. Quite characteristic of the Romorantin grape, the nose is fresh, floral, mineral and nutty, with notes of quince, litchi, eucalyptus, bee wax, honeysuckle, fresh almond and freshly cut yellow hay. The palate is clean, medium to full intensity, fresh, gentle and very well rounded immediately from the attack. The expanding and extensive mid-palate follows with the same round, focus, balanced, and nicely coating attitude, complemented by a great citrus, vivid acidity (yet, it remains soft and silky in a waxy way). Nutty flavors, with a predominance of fresh almond and apricot's skin and seed. The zesty acidity keep this wine in line from being flabby and transport the fruit gently through the lingering finish. At the same time pleasing and intriguing, this excellent Romorantin based wine should interest the adventurous amateurs and connoisseurs, in quest of something different.

After a good half an hour in the fridge, to cool it to the right temperature, not too cold, a little decanting should help to exhibit the fullness and richness of this wine.

Although, its nuttiness is somewhat a difficulty with food pairing, I think that white fish or scallops with butter sauce or almond, like a Sole or a Trout, will be nice. It will surely be ideal with an earthy, "Pleurote" or "Girolle" mushroom risotto with truffle shaves. And during a warm day for the lunch, a summer salad with lettuce, "Crottin de Chavignol" or "Puligny St. Pierre"or any other goat cheeses from the Loire, with citrus and dill vinaigrette and fresh walnut, should be quite refreshing with this wine. In fact, there are many various dishes that we could marry with a Cour-Cheverny Romorantin wine, e.i.: smoked fish, cod, but also lobster or even crab, but I'm also thinking about sweetbread, game, partridge or even a pan-seared slice of Foie Gras. Can you picture it? because I can....

Info partly taken from the winery website at www.domaine-de-montcy.com, translated from the French, because the English version is still under construction.

Step into the Green! Drink more Bio and Organic wines (and Food) from sustainable culture and respect the environment!

Posted by LeDomduVin at 9:03 PM