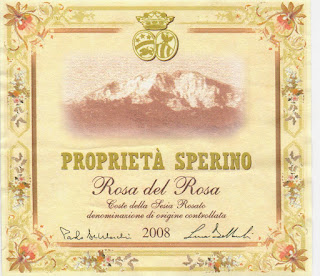 
The Coste della Sesia DOC (roughly translated Slopes of the Sesia) is a relatively small, unknown DOC and hilly region, nestled alongside the up-and-rising Lessona DOC and near the more established Ghemme and Gattinara DOCG, in the foothills of the northeastern part of Piedmont facing Switzerland (west of Novara).

The name comes from the river Sesia, a tributary of the Po, which finds its source in the glaciers of Monte Rosa at the Swiss-Italian border. Emerging slowly, this appellation received the DOC status in 1996, allowing a tiny group of producers to better craft and promote their wines.

The DOC is mainly planted with Nebbiolo, also locally called Spanna, Vespolina and Croatina grape varieties and a touch of Barbera, producing great reds and rosés. The whites are mostly made with the Erbaluce grape variety (85% minimum + other local grapes).

Paolo De Marchi, owner and manager of Isole e Olena, an estate acquired by the Di Marchi family in 1950, making wines like Cepparello in Chianti (Tuscany), has become one of Italy's most respected artisan winemakers and a force for positive changes in the Tuscan wine world. Although, Paolo found fame and recognition in Tuscany, his roots have always been in Piedmont, where he is from.

The De Marchi family inherited "Proprietà Sperino", located in the Lessona DOC region, in the middle of the 19th century and produced wine there until 1970. In 2000 Paolo, along with his son Luca, began reclaiming 25 acres of hillside vineyards by replanting Nebbiolo and the other indigenous varieties, Vespolina and Croatina. Both now manage the estate producing white, rose and red wines. Depending of the vintage, Rosa del Rosa is a tank fermented Rosé made from about 65-70% Nebbiolo, and roughly 20% Vespolina and completed with Croatina.

Surely because of the quality of the 2007 vintage in Piedmont, this 2007 Proprieta Sperino "Rosa del Rosa" Coste della Sesia Nebbiolo blend is a fine example of a great rosé from Piedmont. The robe exposes a superb and intriguing, clear, clear, bright, pale orange-salmon color. The nose is fresh, clean, mineral, fruity and floral at the same time with scent of wild red berry and rose petal. The palate is great with watermelon, cantaloupe and ripe peach flavors evolving into white, smooth juicy fruit with a vivid, pink grapefruit-like, citrus acidity in the mid-palate. The finish is fairly long, nice and dry. Overall, this wine is a tasty sipper with enhancing minerality and racy acidity. Somewhat different yet lovely and approachable. To discover this summer.

Step into the Green! Drink more Bio and Organic wines from sustainable culture and respect the environment!
Posted by LeDomduVin at 1:21 AM