Badia a Coltibuono Chianti Classico Tuscany Italy
The other day, we had the great privilege to welcome at the store Emanuela Stucchi Prinetti from the renowned Tuscan winery “Badia a Coltibuono”. We just bought 3 of her wines and she happened to be in New York to promote her estate’s portfolio.

Like pretty much everything they do at “Badia a Coltibuono”, as far as I can read and taste, their wines are well crafted and inviting, and their website is also full of info, very interactive and well designed. Therefore, I invite you to go and visit it at www.coltibuono.com , to find out more about this Tuscan organic jewel.

The ancient estate, which is in fact an old Abbey, is located in the upper Tuscany, near Montegrossi, in a gently rolling hills area about 68 kilometers southeast of Florence (Firenze) and about 36 kilometers northeast of Sienna.

One of the oldest and most established estate of Tuscany’s Chianti Classico region, Badia a Coltibuono estate (which means Abbey of the Good Harvest) exists since the middle of the 11th century. In 1051, the monks of the Vallombrosan Order, a Tuscan reform of the Benedictines, founded the Abbey and also began planting the first vineyards in the Upper Chianti area. Slowly extending their vast land holdings, which include many thousands of acres, they developed a flourishing wine production and commerce.

In 1810, when Tuscany was under Napoleonic rule, the monks were forced to leave Coltibuono and the monastery was secularized.

First sold by lottery, Coltibuono was then bought in 1846, by Guido Giuntini, a Florentine banker and great grandfather of Piero Stucchi-Prinetti, the present owner. During the years the estate was still under the guidance of Piero Stucchi Prinetti, the estate grew and developed a solid reputation in Italy and abroad through the high quality of its products.

Nowadays, his children Emanuela, Paolo and Guido continue the activities embarked upon by their ancestors with the same dedication, enthusiasm and careful attention to details.

The estate offers many services and products including: Agritourism, Bed & Breakfast, Cooking classes, Restaurant, Olive Oil, Vinegar and Wine, of course. The best of it, they do everything the organic way from their kitchen in the restaurant and classroom, to their fruit and vegetable orchards and more importantly their vineyards and wines.

Agroturismo in Italian, or Agritourism in English, which was once a peculiar and disparate thing in the European countryside and a few rare parts of the rest of the world (still a few years ago), has flourished a great deal over the last 5-10 years with the organic/biodynamic/sustainable movement and more especially the need for the ever-busy-big-town people to find a peaceful place where they can rest and enjoy the local traditions and products, without having to pay the demanded astronomical prices of some of the family and luxury resorts and hotels through out the world.

Moreover, it is usually more practical and enjoyable for families or group of friends that also would like to visit and learn about a specific area without getting the frantic attitude of the other surrounding tourists crowding the same usual visited places.

In most cases and in fact, it is like renting a house or a room in the middle of nowhere, or on the contrary somewhere remote and out of the usual beaten path, to be able to truly experience the area plunged with the locals, their traditions, culture, recipes and local products, without feeling like the average Joe lost in a mass of other American tourists (or else) that have made the same decision and ended up at the same cheap resort (Come on! You’ve been there… you know what I mean…).

You should try, Agritourism is fun and often eye opening, and people are usually more open and easy to deal with because they see that you want to participate, discover and embrace their native habits and ways of living, rather than just be an annoying tourist.

To get back to Coltibuono, we used to carry their 2006 Coltibuono Chianti Classico that we liked very much; however, we just bought their current releases, 2007 and 2008, and like them even better.

Without falling into bad generalization, I can firmly say that from all the wines that I tasted in the store and different events, the 2007 vintage in Tuscany, Piedmont and overall in all the northwestern part of Italy, is, in my opinion, a great vintage rivaling with the 2001 and 2004 vintage which, (here again, in my opinion), were surely the other two best vintages of the last decade for these long established Italian regions. Although the 2009 vintage seems promising, yet it is somehow too early to say because most aged wines won’t hit the market until the end of the year 2010 for some of the earliest and spring 2011 for most of the other.


Despite their more traditional wines sold under the classic “Badia a Coltibuono” brand (or label), the Stucchi family also has a commercial line sold under the name of “Coltibuono” only (a brand or label, including the following “Cancelli” and “RS” wines). Enhanced by the family oenological expertise acquired over the years, the “Coltibuono” label offers a portfolio of wines selected from the best areas of Tuscany that are also distinguished for their good quality/price ratio. 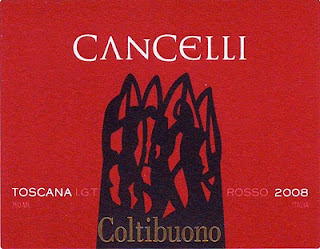 Fairly new to Coltibuono portfolio, “Cancelli”, (named from the drawing on the label which represent an ornamental or structural interwoven framework, like an arrangement of dark crossing laths), is a blend of 70% Sangiovese and 30% Syrah from Tuscany yet outside the classic DOC appellations. Fermented in stainless steel tanks, this wine wasn’t aged in oak at all and underwent a short period of refinement i9n the bottle before release. The addition of Syrah completes the wine with more stuffing and confers a modern touch to it, without totally imparting the taste of this less traditional yet still earthy, approachable and juicy Sangiovese. At this price, it is a great everyday value offering nice, ripe fruit and a straightforward mouthfeel with a gentle finish. Better within the first 2-3 years after bottling, pair this organic, friendly wine with pretty much everything. 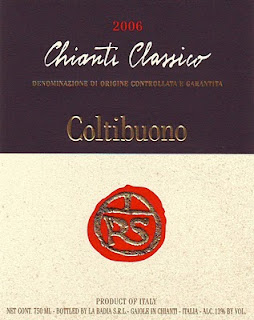 The initial “RS” on the label stands for “Roberto Stucchi”, brother of Emanuela and Guido's great-great grandson, who is the in-house oenologist and co-winemaker. Part of the “Coltibuono” label, this Chianti Classico is a great approachable Chianti that has character and attitude with generous fruit and substantial tannins. The acidity really enhances the fruit and balance the overall profile. The selected grapes went through separate vinification process depending on the parcels of origin and desired extraction, then the obtained wines were aged for a few months in French oak casks and barriques from the Allier forest. Once blended and bottled, the final wine rested for an additional a period of refinement in the bottle before release.

2007 Coltibuono “RS” Chianti Classico exhibits a bright, youthful ruby color. The nose is quite expressive with wild summer berries, spices, leather and dried plum aromas with earthy notes. The palate is rather fruity, soft, well rounded and balanced with refreshing acidity and lingering finish with present yet integrated tannins. Overall, a very pleasing wine offering plenty of layers for a Chjanti Classico at this price. 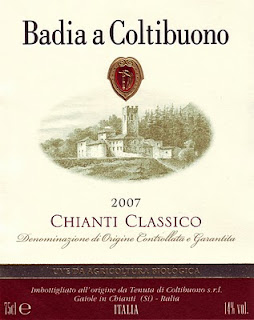 Benefiting of the ICEA certification since 2003 (the Institute for Ethical and Environmental Certification, better known in Italy as “Instituto per la Certificazione Etica E Ambientale), this wine is the result of entirely natural production methods using handpicked organically grown Sangiovese and Canaiolo grapes from Badia a Coltibuono vineyards. It is considered to be one of the most representative wines of the Chianti Classico appellation. The wine was crafted with 90% Sangiovese and 10% Canaiolo from vineyards located in the erea of Monti in Chianti (SI) including Poggino, Vignone, Montebello and Argenina parcels. Vineyards are located between 250-320 meters above sea level and benefit of a South, Southeast –Southwest, orientation. The vines averaging between 10-55 years old are planted on mainly clay with limestone rocks soils. This wine was aged for about 12 months in French and Austrian oak casks and barrels of varying sizes.

2007 Badia a Coltibuono Chianti Classico is quite complex and layered. Behind its bright ruby color of medium intensity, the nose reveals attractive floral and fruity earthy aromas combining the scent of violet and roses with notes of tobacco, black pepper and ripe red and dark cherry. The palate is really well balanced, yet a touch tight and young with refined structuring tannins, mineral and earthy notes, enlightened by a cleansing acidity. The finish is long and persistent with very good ageing potential. Although quite approachable and really enjoyable now, it shows promising signs of settling down and getting even more harmonious within the next few years. Drink it with a little decantation or keep it a little to appreciate it even more.


Overall, Badia a Coltibuono really surprised me by the quality and the consistency of their wines, moreover, being organic and that approachable in their youth, yet don’t get me wrong, with good potential. I hope one day to visit them in Tuscany to fully understand and appreciate all their products.

Info partly taken from the winery website at www.coltibuono.com

Step into the Green! Drink more Biodynamic and Organic wines (and food) from sustainable culture and respect the environment! Support the right causes for the Planet and all the people suffering all around the globe!
Posted by LeDomduVin at 3:42 PM