Domaine du Salvard Cheverny Red Loire Valley France
After my last post on the Cour-Cheverny from Domaine de Montcy (posted on 07.21.09 at www.ledomduvin.com) about their beautiful Romorantin based white wine, I’m bringing you back again to the « Garden of France », in the little village Cheverny.

The village of Cheverny is nestled about 16kms southeast of Blois, not far from highway “A10”, roughly halfway between Tours (75kms to the southwest) and Orleans (67kms to the northeast).

In the "département" of the “Loire-et-Cher”, Cheverny is small appellation surrounding its namesake village, located in an area where some of the most beautiful French Chateaux enhance and even embellish the landscape.

If you take the road going southwest from Orleans to Tours and if you venture around in some of surrounding villages, you may come across some of the most beautiful and aristocratic architectural vestiges from France’s royal history, like:

Cheverny is often associated with its name-like neighbor Cour-Cheverny, located a stone-throw from each other. Yet they are totally different and produce unidentical wines.

Cour-Cheverny village lies in the Loire valley, north-east of Tours and about 12 km (7.4 miles) southeast of Blois and about 1.3 km (0.8 miles) north of Cheverny, on the road between Blois and the village of Romorantin-Lanthenay, where the Romorantin grape supposedly took its name from. Cour-Cheverny only produces Romorantin based white wines, which are fresh, slightly nutty with fresh almond notes, great acidity, structure and texture. They are quite unusual and are worth discovering.

Cheverny produces refreshing whites usually made with Chardonnay and Sauvignon, but also some light, earthy reds that are made from Cabernet Franc, Gamay and Pinot Noir, while Pineau d'Aunis and Grolleau are allowed for the few rosé wines produced in small quantities. Talking about a red Cheverny, here is a good example of it from Domaine du Salvard.

Domaine du Salvard
Existing for more than 100 years but firmly established in the 1930s, Domaine du Salvard is a small family-run winery owned and operated by Emmanuel Delaille and his brother Thierry, located in the small hamlet of Fougères-sur-Brièvre (11kms southwest of Cheverny).

Recognized for its Sauvignon based whites, Domaine du Salvard also produces great reds. Passed down through generations, the Domaine expanded from roughly 10 to 35 hectares of vines, which are managed under sustainable culture.

The vineyards have been planted with approximately 90% Sauvignon Blanc and a touch of Chardonnay to make their Cheverny white (85% Sauv. & 15% Chard.), with a complementing small amount of Pinot Noir and Gamay to make their red Cheverny (50/50). None of their wines see any oak treatment, and the resulting wines offers great balance, acidity, harmony and Terroir expression.

Representing the 5th generation Emmanuel and Thierry follow the steps of their ancestors and continue with conviction and even more enthusiasm to craft elegant, racy and earthy wines within the same family winemaking tradition. 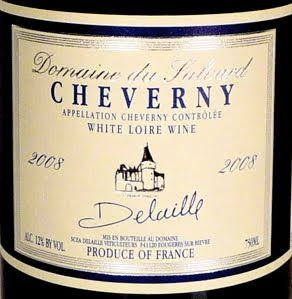 A blend of 50% Pinot Noir and 50% Gamay, the 2008 Salvard red Cheverny is delightfully expressive, fresh and earthy, and unoaked. Behind its youthful bright ruby red color, this wine offers vivid aromas of freshly crushed wild red berries, minerality, earth and floral hints. The palate is zesty, juicy, racy and earthy with the type of flavors as in the nose. It is balanced and inviting, versatile and refreshing, with great harmony between the acidity and the red fruit. The lingering finish calls for another glass. Definitely a springy-summery wine to serve room temperature or even slightly chilled on cold cuts, appetizers, salad, goat cheese or simply on its own by a late warm afternoon.

Step into the Green! Drink more Biodynamic and Organic wines (and food) from sustainable culture and respect the environment! Support the right causes for the Planet and all the people suffering all around the globe!
Posted by LeDomduVin at 12:33 AM