Carignan, also known as “Carignano” in Italian and “Cariñena” in Spanish, is a red grape variety that originated from Cariñena, the namesake village located in the province of Aragon, Spain.

Anciently thought to be part of the blend in Rioja’s wine yet more widely used in Aragon, the grape gradually expanded first southward towards Algeria, then eastward toward Catalonia, Roussillon, Languedoc, Rhone, Sardinia and elsewhere in Italy, always grown mostly to be part of a blend.

More recently, probably over the last 100-150 years, the grape was exported and experimented in some part of the New World; which explains the presence of Carignan grown in California and part of Australia, amongst other regions, where it has often been blended with other grapes and there as well rarely bottled on its own.

Talking about high alcohol, I remember once, a few years back, while visiting the tree storey house cellars of Vall Llach, (a winery nestled in the heart of Porrera, Priorat, Tarragona), and tasting the new vintage at the barrels, the winemaker showed us a barrel of old vines Carignan that didn’t finish its alcoholic fermentation… yet we were in April, nearly seven month after harvest. It was amazing and I really never saw that before (or even after) in my entire career.

The barrel of Carignan was still bubbling and fermenting with still nearly 18 degrees of alcohol (in April!!!). Unbelievable, the yeasts were still eating the residual sugar… and because of the rarity of the event (only one barrel amongst all the other), the winemaker wanted to see when the fermentation would stop by itself rather than interfere. I think that it was a barrel of 2004 or 2005 (2005 I believe but I couldn’t find my notes anywhere..), a vintage which had been apparently so hot with barely no rain that it highly ripened the grapes, concentrating the sugar and lowering the amount of juice.

From the winemaker point of view, this kind of rare exception is mainly bound to happen to wine made from Carignan grapes, which can reach high alcohol content in ultra ripe vintage. During this trip, I also tried some of the most interesting Carignan samples at Mas Martinet and Cims de Porrera with Josep Lluis Pérez and his son Adría Pérez and daughter Sarah Pérez, both now renowned oenologists and consulting winemakers in Priorat (and other places).

However, largely planted for its high yield productivity, up to 200hl/ha, Carignan still requires a lot of attention due to its high sensitivity to rot, powdery mildew, downy mildew and grape worms. Also being a late budding and ripening grape, it requires a warm climate and a long sunny ripening season in order to achieve full ripeness. The grape is a difficult one for winemakers to work with being naturally high in acidity, tannins and astringency, which require a lot of skill and experience to produce a fine, harmonious and elegant wine.

All the above factors contribute to explain why Carignan has always carried a bad reputation and has mostly been used and blended to bring color, strength, depth, tannic structure and spiciness to the final blend, rather than being bottled on its own. However, well tended and carefully harvested, Carignan demonstrates great depth and warm, earthy, spicy character with enough acidity to keep its juiciness and enhance the overall wine’s profile, and more importantly balance and integrate the high alcohol.

When I used to work in the restaurant business and even now working in boutique retail store, I realized that most people are not necessarily acquainted with this grape.

They may have heard of it or know that it is usually part of the blend of established earthy red Rhône and Roussillon in France, and Aragon and Catalonia in Spain, more especially in Priorat, Monsant and Tarragona; but rare and few seem to be the person who tried Carignan bottled on its own.

That is why, I decided, as always in my quest to introduce you to lesser-known and hard to find and small producers’ wines, to write about two great wines, both made with 100% Carignan yet completely different because of their place of origin but somewhat original and inspiring, and apart from the now more common and easier to find Spanish Carignan (that I also like very much, by the way). The first one is French from the Languedoc, and the second one is Sardinian, but I will describe it in another post following this one.

Les Chemins de Carabote Vin de Pays du Mont Baudile
“Les Chemins de Carabote” is a small Languedoc winery, owned by Jean-Yves Chaperon & Nicole Michel, which is located about 35 kms west of Montpellier between the village of Saint-André de Sangonis and the hamlet of Cambous, in the foothills of the “Mont St. Baudile” (a little mountain culminating at 884 meters above sea level, located north of Arboras and Montpeyroux, overlooking the Séranne massif, which separates the winery from the Larzac plateau).

It is a fairly new project that came to life with the first vintage in 2005, from the desire of Jean-Yves (a journalist at RTL radio) and his partner Nicole (a civil servant), to have their own vineyards and craft their own wines. Both are still working full time in Paris, keeping an eye and somewhat “running” the project from afar, and mostly come during weekends and vacations via the “TGV” (meaning “Train à Grande Vitesse” or literally “High Speed Train” in English).

Philippe Ellner from the “Domaine des Conquêtes” took them under his wing at his cellar in Aniane, where oenologists Stéphanie Prabonnaud and Jean Natoli orchestrate most work in the vineyards and more especially the cellar.

From the famous windmill of the Middle Ages, which stood on the bank of the Hérault River, only remains a sinuous path running alongside a parcel of vines bearing its name: “Les Chemins de Carabote”.

Planted on gentle terraced slopes facing south, the vines grow in this harsh, arid and austere rocky soil covered with larges pebbles (locally called "Terrasses de grès"- Gallets roulés -), which capture the heat of the day of this warm climate area during the day, to restitute it at night when it is cooler. Fall and winter can be rainy and cold but summer and harvest season are usually extremely hot with crushing heat and shortage of water, which represent ideal growing and ripening conditions for Carignan.

They produce 2 red wines under the label “Les Chemins de Carabote”: an AOC Côteaux du Languedoc made with Syrah-Grenache-Carignan and our wine of the day, Vin de Pays du Mont Baudille from Carignan only. They also craft a “Terrasses du Larzac” rouge. 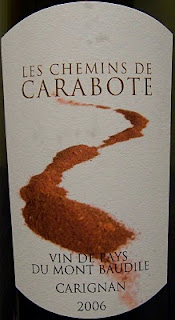 The 2006 is only the 2nd vintage produced. This wine was produced with 100% Carignan grapes grown in AOC Côteaux du Languedoc, but was sold under Vin de Pays du Mont Baudile appellation, because by law a “Côteaux du Languedoc” AOC wine (red or rosé) must obligatory contain a minimum of two type of grape variety: Grenache Noir, Syrah and/or Mourvèdre (50% minimum) complemented by Cinsault and Carignan Noir.

Following a long ripening season, the Carignan grapes appeared to be fully ripe, complex and concentrated, which were the deciding factors to bottle the resulting wine on its own to fully enhance and preserve its unique character and flavors.

2006 Les Chemins de Carabote Vin de Pays du Mont Baudile possesses an attractive ruby-garnet red color of medium intensity yet it appeared slightly darker at first. A bit shy just after opening, but more appealing after about 20 minutes, the nose is dry, warm and earthy with interesting aromas of ripe dark fruit, prune and underbrush, slightly animal tones intermingled with hints of stone minerality, coffee and spice. The palate is quite dry and dark too with the same type of flavors, yet after a few minutes of opening, it started to open up and took a nice juicy and spicy balanced profile with interesting tannic structure.

In fact, it was surprising because it seemed lighter and rounder than I thought it will be with a lingering spicy touch, not as rigid or alcoholic as the nose and the first sip may have suggested. A decanting will surely tame this wine and give it the time it needs to open up properly.

Overall, racy, fairly complex and enjoyable, it was a nice surprise. May be not your everyday wine, but this very approachable Carignan is definitely a food wine to pair with substantial food like grilled red meat, game, venison, wild boar, paté and cheese.

Info partly taken from the winery website at www.carabote.com

Step into the Green! Drink more Biodynamic and Organic wines (and food) from sustainable culture and respect the environment! Support the right causes for the Planet and all the people suffering all around the globe!
Posted by LeDomduVin at 3:29 AM