It is not the first time that I’m really pleased by a wine from Savio’s portfolio. I can say that 75% of the wines that I tasted from his selection, literally agreed with my palate and talked to me (yes, wines talk to me in their own respective manner and attitude; go figure it has been going on for the last 18 years+). The other 25%, even if not as agreeable, still trigged something in me. I need to admit the guy is good and his wines are as inviting as they are healthy and racy.

There is no reason to introduce Savio Soares anymore. Although, just to say a few words, I will say that the personage is quite a character. Playful, ongoing and sympathetic, originated from Brazil, he apparently lived for a good part of his life in the US, including working for quite some time in the restaurant business as a waiter in New York restaurants, then a few years ago, put his own distribution company of exported wines.

Like Kermit Lynch, Neal Rosenthal, Louis/Dressner, Peter Weygandt, Jenny & Francois, amongst others before him, Savio makes a point to entertain a personal and durable relationship with most of his producers. He now spends most of his time traveling between Germany, France and New York, and elsewhere.

Over the last 3 years+, he has gradually gained the reputation of having a serious and distinctive palate inclined to earthy, focused, balanced, harmonious and crisped whites, rosés and reds from Germany, where he lives with his family, but also Austria, France, Italy and Portugal. Mostly from small producers, his wines are mostly organic or biodynamic or at least made from sustainable culture management.

Spring is now upon us. Temperatures have risen. Days are longer. Evenings are calling for BBQ(s) and late dinners outside, in the garden or seated at a restaurant terrace. Soft Rosé(s) and vivid White(s) from around the world will soon crowd the shelves of your local store. Therefore, it is time to go back on a quest to find lighter, juicer and crispier reds, made from grape variety like Pinot Noir, Gamay and Cabernet Franc, amongst other.

Lately, I tasted the 2006 Chinon Cuvée “Les Puys” from Wilfrid Rousse and was quite impressed with it. Although I think that his 2007, will even be superior and more age worthy, his 2006 was delightful with crisp red berry fruit and enhancing acidity. The wine is part of Savio Soares selections in New York.

Domaine Wilfrid Rousse
By passion for wine, Wilfrid Rousse started in 1987 with only 1 hectare of vines. He settled his Domaine at “La Haldabière”, which is in Savigny-en-Véron, a small village near the confluence between the Vienne and the Loire rivers, about 20kms southeast of Saumur and about 55kms southwest of Tours. Savigny-en-Véron is located a few kilometers northwest of Chinon, and is amongst the various villages that constitute the Chinon appellation.

He now represents one of the most established and renowned producers of Chinon, cultivating 18 hectares of Cabernet Franc planted on diverse type of soils. This diversity allows the application of various vinification principles, resulting in wines that can fully express the uniqueness and character of their Terroir of origin. His philosophy encompasses the respect of the Terroir and the environment, as well as the equilibrium and healthiness of the soils, to favor and protect the ecosystem.

Benefiting from southern exposure and the presence of a favorable microclimate influenced by the two surrounding rivers, the Cabernet Franc vines, which age varies from 3 to 80 years, grow in ideal condition to produce flavorful and elegant wines of great quality and balance.

Grass naturally grows in between the rows and is voluntarily untouched and uncut, especially where the most vigorous vines are, to increase natural stress, enhance the ecosystem and allow better concentration. In other parts of the vineyards, the soils are ploughed. No herbicides or pesticides are used, and vineyard management is organically oriented.

Harvests are usually done by hand around the end of September, beginning of October, when grapes have reach perfect ripeness. After careful harvest and passing through the sorting tables, the vinification process occurs in stainless steel tanks. Fermentation can last from 8 days to 3 weeks depending on the Cuvées. The following malolactic fermentations can last for a month. Ageing in oak barrels is only done for certain Cuvées.

King of Loire, the Cabernet Franc grape produced in this Domaine, develops complex wines with fruity attitude (and I do not mean sweet), good texture and structure, and dense aromas. Wilfrid Rousse produces a few Cuvées that all received high recognition from the press and some that have been rewarded many times with accolades and medals.

FYI: The Domaine’s logo represents a crowned mermaid (about to eat a fish) "Girouette" (weathercock), which has culminated on the roof of “La Halbadière” since the 17th century. 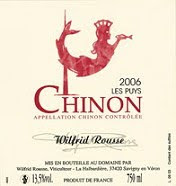 “Les Puys” comes from a young vineyard of 3 hectares situated in the elevated part of Chinon, with full southern exposition and ideal drainage conditions. The amount of sun received by the grapes, due to the southern exposure, is essential for a perfect maturity. The Cabernet Franc vines are planted on clay-siliceous soils, where grass is left to grow inter-rows. De-leafing usually occurs to enhance sun exposure and aeration of the grapes, followed by green harvest if necessary, depending on the quality of the weather and the overall vintage. The wine was aged for 12 months in the naturally temperature controlled Domaine’s caves, carved in the “Tuffeau” (soft white-pale yellow limestone characteristic of the Loire Valley) probably between the 12th and 15th century.

The 2006 Wilfrid Rousse Chinon Cuvée “Les Puys” is quite nicely crafted. Although I think that his 2007, will even be superior and more age worthy, his 2006 was delightful with crisp red berry fruit and enhancing acidity. Behind its bright ruby red color, the wine expressed lovely and fresh earthy aromas intermingled with red berry fruit, mineral and slight green hints. The palate was the most surprising. Very focus, balanced, juicy, vivid with bright red fruit, good minerality, superb acidity and needed yet integrated tannic structure, this wine refreshed my mind and quenched my thirst. Serve it room temperature with lamb or duck, or even slightly chilled with cold cuts, “paté”, “saucisson” and “cornichons” as appetizers to open your appetite and wake your taste buds; or even with goat cheese and lettuce salad before desert.

Info partly taken and translated from the winery website at www.chinonrousse.com

Step into the Green! Drink more Biodynamic and Organic wines (and food) from sustainable culture and respect the environment! Support the right causes for the Planet and all the people suffering all around the globe!
Posted by LeDomduVin at 3:02 PM