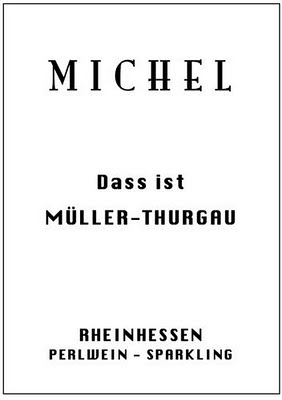 A few months ago, while tasting with Savio Soares at the store, Matthew, the owner, and I fell in love for a delicious dry bubbly wine from Germany, more precisely a “Perlwein” (semi-sparkling), made by Schloss Müehlenhof, called “Michel Dass ist Müller-Thurgau”.

Weingut Schloßmühlenhof (Schloss Müehlenhof) is an estate, which now managed about 20 hectares of vineyard planted in the Rheinhessen region of Germany. The winery is located in Kettenheim, a village 3 kilometers south of Azley, a municipality belonging to a Verbandsgemeinde Azley-land, about 80 kilometers southwest of Frankfurt.

The Michel family produces a wide array of wines from various varieties. The varieties range consists of classic traditional varieties, such as Silvaner, Riesling, Weißer und Grauer Burgunder, Chardonnay und Sauvignon Blanc as well as lesser-known varieties such as Rebzüchtungen, Huxelrebe, Ortega, Morio-Muskat, Bacchus and Kernerrebe together. The red spectrum ranges from Portugieser and Dornfelder towards Regent, Spätburgunder (Pinot Noir) and St. Laurent.

Wines are made with the upmost care for the environment, using sustainable natural methods adapted depending to the needs in the vineyards and in the cellar. Quality and consistency confer to their portfolio certain notoriety recognized all around the world. Crisp, vivid and focus, the wines from Schloss Müehlenhof are very good sought after values.

I probably should have written about their Michel Müller-Thurgau earlier in the season, because this wine is really dry and summery. Yet, it’s never too late and after all this wine can be enjoyed at any time of the year.

"Sekt" is the German term for quality sparkling wine. The majority of Sekt produced (around 95%) is made with the Charmat method. The remaining premium Sekt being made according to the “Méthode Traditionnelle”. Cheap sparkling wine usually made with CO2 injection must not be called Sekt, but rather Schaumwein (literally "foam wine" in German). A semi-sparkling wine is called Perlwein.

In fact, at first, I made the mistake of not paying so much attention to the label, only reading the bigger and more obvious letter: “Michel” and “Müller-Thurgau”. I thought that it was a dry still white wine, and it is only when I first tasted it that I realized that this wine had a fizz to it. Agreeably surprised but somewhat startled, I once again read the label. It says:

"Michel" is the last name of the family which has owned and run the estate for the past 150 years, restructured and increased the vineyard in the 1920s and in 1985, established the name of "Weingut Schloßmühlenhof". Walter Michel and his wife Gabriele are proud to pass on the rein of the estate to their son Nicolas, who in 2007 has successfully completed his studies for viticulture and oenology. He benefited of his training in recent years not only in his parents' estate, but also in other vineyards in Germany and abroad to expand his horizon of experience. Diligently following his father’s steps, he would continue, to actively pursue the winemaking at the estate, combining tradition, natural methods and recent technology to maintain consistency and increase the quality of all of his wines.

“Deutscher Perlwein mit zugesetzter Kohlensäure” literally means “German sparkling wine with added carbon dioxide (CO2)” which is exactly what this wine is: a semi-sparkling wine due to addition of CO2. Only difference with the regular fully sparkling “Sekt” is the method of course but more precisely the amount of CO2 added and therefore the “Bar” pressure that it implies. Perlwein’s pressure is between 1 and 2.5 bars, whereas in Sekt, the pressure is 3 bars or greater. Perlwein without the mention of “mit zugesetzter Kohlensäure” on the label, did not have any CO2 added and possesses bubbles due a secondary fermentation, generally occurring in stainless steel tanks, which has been stopped before the wine attained fully sparkling stage.

It is interesting to notice that German and French use somewhat the same term for a semi sparkling wine: “Perlwein” in German (semi-sparkling wine) and “Un vin perlant” in French, which literally and more metaphorically means a wine with a touch of fizz giving the taster the sensation to have multiple tiny airy pearls dancing with his tongue’s taste buds.

The following label slightly differs from the original, but you get the picture...

Made with 100% Müller-Thurgau vinified in stainless still tanks, the wine received an addition of CO2 before bottling topping the natural slight effervescence that may occur in young recently bottled white wine (the phenomenon is more current than people think, and people are often surprised when they taste that slight fizzyness in whites that just arrived on the market shortly after they were bottled).

Behind its pale yellow transparent color enlighten with greenish-silver reflects, ultra tiny bubbles may make you think that it is a young wine and that the bubbles will immediately dissolve in contact with oxygen, like for young wine recent bottled; nothing really to indicate that it is a semi-sparkling at this point, except the inaudible “pfffff” when you open the bottle. The nose is dry, clean and fragrant with light citrus and yellow stone fruit aromas combined with floral and mineral notes, and definitely no hints to let you guess that it will be sparkling. The palate is light, crisp enhanced by vivid acidity, with good structure and the same fruit and mineral flavors as in the nose. The expanding palate is quite delightful with refreshing fizzyness, nothing compared to real sparkling wine or Champagne. The finish is definitely super dry and crisp. What a wine under $15! Loved it. Definitely a friendly versatile food wine in my opinion, which will accommodate most dishes prepared with fish and white meat from the appetizers to the cheese.

Info partly taken and edited from the winery website at www.schlossmuehlenhof.de

Step into the Green! Drink more Biodynamic, Biologique and Organic wines (and spirits and food) from sustainable culture and respect the environment! Support the right causes for the Planet and all the people suffering all around the globe! Also follow projects and products from the Fair Trade, an organized social movement and market-based approach that aims to help producers in developing countries obtain better trading conditions and promote sustainability. Also support 1% for the Planet, an alliance of businesses that donate at least 1% of their annual revenues to environmental organizations worldwide.
Posted by LeDomduVin at 8:00 PM

Email ThisBlogThis!Share to TwitterShare to FacebookShare to Pinterest
Labels: Germany, Müller-Thurgau, My favorite wines of the moment, Rheinhessen, White