Bodegas Beronia is located in the village of Ollauri, about 5 kilometers south of Haro and about 10 kilometers west of San Vicente de la Sonsierra, in the Rioja Alta part of La Rioja.

In the third century BC, the “Berones” inhabited La Rioja, hence the name of "Beronia", named after them. This tempered part of Spain occupied by the “Berones” was found to be ideal for vine cultivation; as a result, La Rioja has since then proved to be one of the country's best and most consistent wine producing regions.

Founded in 1973 by a group of friends, Beronia was rapidely considered as a winery of reference, as it produced, from the beginning, classic Reserva and Grand Reserva wines using the purest and most traditional methods of Rioja.

Exceeding all expectations, Bodegas Beronia partnered with González Byass in 1982 to perfect the development of both projects. Since then, the sales and success of Beronia have been excellent in both national and international markets.

Beronia’s history and philosophy is based on two fundamental values: tradition and quality. Both concepts have allowed Beronia to produce constantly superior wines from the entry level to the special cuvées. All of which are exported to more than 70 countries worldwide.

In terms of Terroir, Bodegas Beronia is located in the Rioja Alta area, which corresponds to the northwestern part of La Rioja region. This particular area possesses mainly calcareous-clay soil and most vineyards are planted on average at an altitude of 600 meters (ASL). These two main factors allow for good drainage and enough retained moisture in the soil for the vines, but also cooler temperature at night due to the elevation, which is ideal to slow down the ripening process, consequently obtaining perfect ripeness.

The area’s climatic conditions should mostly be inﬂuenced by the Atlantic Ocean to the north, however, the Cantabria and Demanda mountain ranges act as a natural protection, forming like an amphitheater, which somewhat shelter the sunbathed hilly Rioja vineyards. The region also benefits of the Ebro River, which creates series of various microclimates throughout the 3 Riojas (Alta, Alavesa and Baja) and provides much needed water for the vines.

Closed to Haro and San Vicente de la Sonsierra, respectively the capital of La Rioja Alta and the most charming and renowned hilltop postcard village of La Rioja, Bodegas Beronia's location is considered to be a truly unique place for the creation of wines of high quality. The medieval city of Haro itself is home to some of the best and most notorious wineries of La Rioja. "Barrio de la Estacion", Haro's train station neighborhood complex, which originated in 1877, still encompasses wineries with some of the oldest Calado in La Rioja (deep underground caves carved in the calcareous hill used for the ageing and storage of the wines). To the north of the Estacion, the oldest of the remaining wineries are: Bodegas Lopez de Heredia "Tondonia" with its Calado dating back from 1892; "Bilbainas" and "Roda". Also within the train station neighborhood, but to the south of the previous wineries, with semi-underground Calados, reside "La Rioja Alta", "Gomez Cruzado", "CVNE" and "Muga". Most wineries, located near the Barrio de la Estacion (the train station quarter), were built in this area to faciliate the transportation of wine.

The grape varieties used in Beronia are all the ones authorised by the Appellation of Origin of Rioja, which include Tempranillo (90%), Graciano (3%), Mazuelo (3%) and Viura (4%). The majority of the grapes come from contracts with about 150 vine-growers, but also other long term contracts and year round cooperation with all of them.

As I just mentioned, all the grapes used at Beronia come from the immediate surrounding vineyards around the estate but also from various vineyards within a 10 kilometers radius of the cellars, ensuring that only the highest quality grapes enter the winery and that transport of the grapes between the vineyards and the winery occurs as fast as possible to preserve the quality of the fruit. A close relationship is maintained with these 150 vine-growers who supply the grapes, guaranteeing that only the best quality grapes are selected and that the process is done so in the most natural way.

Beronia's technical experts frequently visit the estates throughout the year ensure that the use of fertilizers and chemicals are kept to a minimum, so as not to threaten the health or quality of the grape. It is their priority to maintain healthy and high quality grapes.  Beronia, true to its tradition, produces a classic line of ﬁne and well-balanced wines: Crianza, Reserva and Gran Reserva. In addition to these, two white wines are also produced, a young Viura and a barrel fermented Viura.

They also preserve their innovative and avant-gardist attitude with an interesting range of single variety wines, special production Tempranillo and Beronia Mazuelo Reserva, making them the only winery in Rioja to produce a Reserva wine from the Mazuelo grape.

The harvest usually takes place from the end of September until the middle of October. All grapes used in the production of the wines at Beronia are obtained from specially chosen vineyards in the high and low areas of La Rioja Alta, to mix grapes of various degrees of ripeness and Terroir of origin to add complexity to the final desired blend.

95% of the wines produced at Beronia are red wines, which are aged over a long period of time in American oak barrels. A select number of barrels, used for the best wines, are mixed wood, with the cover made of French oak and the staves of American oak.

Bodegas Beronia has a total production of 500.000 cases of 12 bottles (9 liters per case) with over 2.750.000 bottles in stock and houses 28.000 oak casks (American, French and mixed) with an average age of 4 years, after which the barrels are sold and rotated with new ones.


The wines produced by Bodegas Beronia include:

The wine maker Matías Calleja, has worked as the technical director of the bodega for more than 20 years. He has more than 25 years of experience in producing and ageing quality wines from La Rioja.

Last year Matías launched his latest creation: III AC, a tribute to the first inhabitants of La Rioja. A unique wine made with selected grape varieties Tempranillo,  Graciano  and  Mazuelo  from  old vineyards. This is then aged in American, French and Bulgarian oak casks. The result is a superb and complex wine. 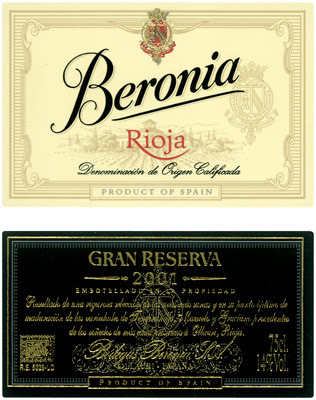 Talking about superb wine, for a guy like me who is a Spanish wines aficionado, the 2001 Gran Reserva is an excellent example of the quality of this exceptional vintage in Rioja, more especially at under $30, it is a steal.

Made out of roughly 92% Tempranillo 4% Carignan and 4% Graciano, and only after a careful selection of the grapes and a long fermentation, the 2001 Beronia Gran Reserva was aged for 24 months in American-French oak barrels, to be bottled in 2005, and remained in the cellar for a few more years before release.

Note by the way that La Rioja wines are the only wines in the world to be aged at the property for that long (3 years minimum for a Reserva - 2 years in barrels + 1 year in bottles - and 5 years minimum for a Gran Reserva - 2 to 3 years in barrels and the remaining in bottles) and to be released on the market only when the winemaker decide so and the wine is ready. Which is quite amazing, when you think how labor intensive and about how much it must cost them to store these wines for years.

However, as I was saying earlier, I’m a big fan of the 2001 vintage and old Rioja wines in general and I wasn’t disappointed at all by this wine. Quite classic in fact. Red cherry color with garnet and ochre reflects on the rim. The nose boasts complex and elegant ripe fruit and oaky chocolate aromas intermingled with notes of sweet spices like nutmeg and cloves, and some underbrush and balsamic hints. Framed by soft and integrated sweet woody tannins, the palate is broad, rich, ample and well structured, with complex nuances of ripe fruit, chocolate, spices and licorice. The long finish is harmonious and agreeably persistent. When I think Rioja wines, I usually think about "Chuletas Asado"de Porcino y de Cordero (grilled lamb and pork chops), served with local mushrooms and grilled or roasted vegetables.

Info partly taken and edited and translated from the winery website at  http://www.beronia.es

Well known from the local winemakers who usually go there for the lunch with their family and guests and trade visitors like me, this family-run restaurant which resembles more like a friendly family cantina than a three stars Michelin, serves probably the best Lechazo of the Ribera del Duero region.

Lechazo is the baby lamb roasted in wood fired ovens typical from Castilla, usually served in a steaming open copper pot with a green salad aside seasoned only with olive oil and “Fleur de Sel” type of salt. The combination is to die for.

There are no menus here since roasted baby lamb is the specialty and the only dish prepared in the restaurant. It is usually pretty busy and you must book in advance, as they take in consideration the amount of lamb that you will eat. The usual order is about a quarter for two, but they really have to know in advance as the lambs are counted and evaluated for the exact number of guests who booked for the lunch and slowly roasted from early morning.

You can start with some black sausage and some cheese from the area, also available as a starter, but the main and only dish is the Lechazo and green salad. The lamb is so tender that it literally melts in your palate. The wine list offers a great choice of the local wines. And if you happen to have nothing to do in the afternoon, you might as well stay and admire the view of the Duero river, with a Spanish brandy, a cognac or a Calvados, from the bar which is full of classic Digestif(s) that will pair pretty well with one of the numerous cigars their humidor contains.

If you've never experienced such thing as "Lechazo", the Castilla way, you ought to go to El Nazareno.


Step into the Green! Drink more Biodynamic, Biologique and Organic wines and spirits and food) from sustainable culture and respect the environment! Support the right causes for the Planet and all the people suffering all around the globe! Also follow projects and products from the Fair Trade, an organized social movement and market-based approach that aims to help producers in developing countries obtain better trading conditions and promote sustainability. Also support 1% for the Planet, an alliance of businesses that donate at least 1% of their annual revenues to environmental organizations worldwide. "Commerce Equitable" or "Fair Trade" is evidently and more than ever a needed movement connecting producers and customers, to be aware of others and their cultural and traditional products based on high quality, natural components and craftsmanship.
Posted by LeDomduVin at 5:12 AM