2009 Famille Peillot Bugey Pinot Red table wine producer at Montagnieu, Bugey, France
Bugey is a small appellation, yet pretty spread out, comprised in a triangle between Lyon, Bourg-en-Bresse and Chamberry, in the eastern part of the Ain département of France, west of the “Massif du Jura” southern hills. Vineyards cover around 500 hectares (1,200 acres) spread over 67 communes in the department of Ain. (see map below courtesy of the Syndicat des Vins du Bugey) 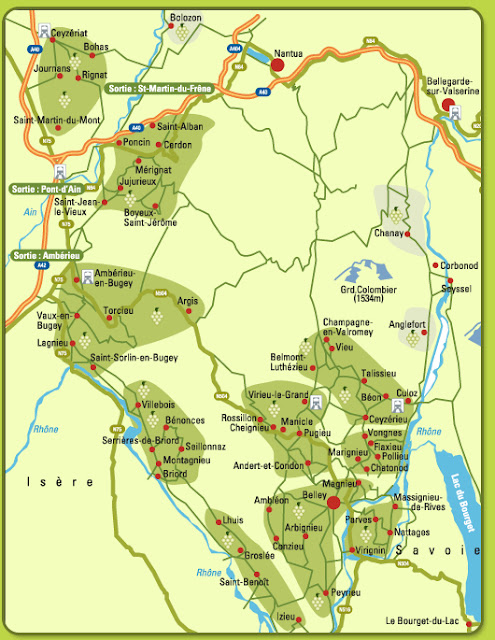 The wines used to be produced under the “VDQS” designations Bugey and Roussette du Bugey, which, in May 2009, were both elevated to Appellation d'Origine Contrôlée (AOC) status. A high proportion of Bugey wine is white, but rosé, red and sparkling wines are also produced. Made predominantly from the aromatic white variety Altesse, locally called Roussette, Bugey white wines are surely the most notorious of the area, with of course those from neighboring Savoie.

Although completely different but surely due to the fact that they share the same grape varieties and both are mountainous appellations with similar character and minerality, and quite closed in distance, Bugey is often assimilated to Savoie, which is located a bit further south around Chamberry and surrounding the western and southwestern part of Massif des Bauges.

In Bugey, like in Savoie, wines are most exclusively made with Altesse / Chasselas / Jacquère / Molette / Verdesse / Gringet / Mondeuse Blanche for the whites and Mondeuxe Noir / Persan / Pinot Noir for the reds. However, Chardonnay, Aligoté, Pinot Gris, Poulsard, Gamay and Molette can also be found and be part of the final blend depending on the desired wine style, its village and appellation of production.

Most wines from Bugey are rather unknown and undiscovered; yet, two of them seem to have broken the impassable boundary that Lyon represents in terms of recognition outside the Ain department: Montagnieu white and Cerdon du Bugey red sparkling, which are, by far, the most famous ambassadors of the Bugey region, as well as the “Poulet de Bresse”, the only poultry in France to have its own AOC

Yes, AOC - Appellation d'Origine Contrôlée  - goes for food too if you didn’t know, cheeses, specialty dishes from specific areas, animals and their meat, and much more… but it will be too long to explain everything in this post; so I invite you to read a very informative article on the subject at: http://www.diplomatie.gouv.fr/en/france_159/french-society_6816/way-of-life_5279/french-food_5356/appellation-origine-controlee-regional-label-of-excellence_8389.html

Winemakers in the Bugey beg to differ. They feel that their region has a soil and a climate all its own, which produce wines found nowhere else in France (Cerdon being the less obscure example of Bugey’s originality).

The 6 hectares Domaine of the Peillot family is located in Montagnieu, a village south of Cerdon, on the eastern bank of the Rhône river at the foot of the southern hills of the Jura Massif, with premières côtes overlooking the Rhône valley, and most of its production is a white sparkling wine made from Chardonnay, Roussette de Savoie, Gamay and Jacquère. The grape Roussette is called Altesse locally, and it survives in the Bugey in a few patches of old vines, for it is not as hardy, reliable and productive as others. Only two young winemakers in Montagnieu, Franck Peillot and Benoît Dumont, produce still wines exclusively from this grape. By law, the wine, Roussette du Bugey, can contain any white varietal, in any proportion. That’s why Peillot’s is labelled 100% Altesse.

Franck Peillot, who took over his family estate five years ago, carries on the work of 4 generations before him. Although he makes a sparkling Montagnieu from Chardonnay, Altesse, and Mondeuse, he vinifies all of his Altesse old vines as a still wine. With low yields and high ripeness, he is set to revive the wine that Jules Chauvet (a Beaujolais négociant, eminent taster and writer who has inspired a whole school of “natural winemaking”, notably in Morgon) put on a par with Château Chalon, Château Grillet and Yquem. Exaggeration aside, the varietal is thought to be a cousin of the Hungarian Furmint of Tokay fame, and, even when vinified dry, it retains a fair amount of residual sugar.

Peillot is also a believer in the quality of his Mondeuse grapes, and is the lone vigneron in the village who obtained the appellation Montagnieu Mondeuse with his red wine in the 1997 vintage. All of his vineyards are planted on fairly steep slopes with great southern exposure and rich in minerals soils.

The wine of today was produced with 100% Pinot Noir crafted from a 1-hectare vineyard. This Pinot Noir has become somewhat of a cult, as it is very hard to get a hold of given its tiny production. We only have a few cases and it will go very fast. 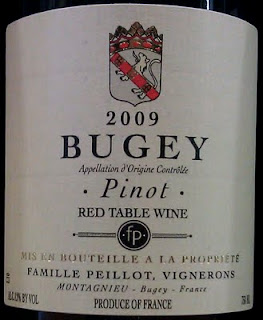 Made from 100% Pinot Noir vinified in stainless steel tanks, the 2009 Famille Peillot Bugey Pinot presents a fairly dark color in the glass with deep red reflects. The nose is fresh, delicate, somewhat restraint with dark berries and red cherry aromas mingled with earthy, mineral and slightly herbaceous notes (touch green somehow despite the ripeness of the vintage). The palate is fresh, delicate, dry and somewhat esoteric yet clean and pleasing, but fragile. The finish is really dry and mineral.

I tasted slightly cold first and really enjoyed it for its freshness and brightness, yet mixing dark and red berries. But I re-tasted it by the end of the day at room temperature, and found it a bit green and tight, still enjoyable and very summery but not for every palate and definitely not your everyday wine. Although, I liked it a lot because it corresponds to my palate and the type of wine that I like to drink when it is super hot outside, I will recommend to chill it a bit to mask that slightly green edge and to accentuate the acidity and the brightness of the fruit. Wine connoisseurs and amateurs may be surprised and pleased, but novices may frown.

Info partly taken from the importer website at http://louisdressner.com/Peillot/  and map of Bugey courtesy of the Syndicat des vins du Bugey at http://www.vinsdubugey.net/08_caves.php

Step into the Green! Drink more Biodynamic, Biologique and Organic wines and spirits and food) from sustainable culture and respect the environment! Support the right causes for the Planet and all the people suffering all around the globe! Also follow projects and products from the Fair Trade, an organized social movement and market-based approach that aims to help producers in developing countries obtain better trading conditions and promote sustainability. Also support 1% for the Planet, an alliance of businesses that donate at least 1% of their annual revenues to environmental organizations worldwide. "Commerce Equitable" or "Fair Trade" is evidently and more than ever a needed movement connecting producers and customers, to be aware of others and their cultural and traditional products based on high quality, natural components and craftsmanship.
Posted by LeDomduVin at 1:12 AM