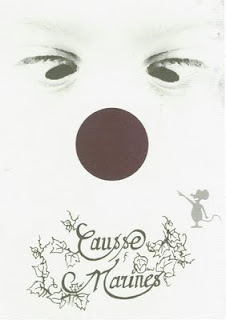 Like most Appellations in the southwest of France, Gaillac is fairly small and rather undiscovered, covering about 4,200 hectares. The traditional red wines of the region boast good ageing potential, about 8–10 years, due to the very good tannic structure and complex texture.

Cabernet Franc, Cabernet Sauvignon, Duras, Fer Servadou and /or Syrah are the main grape varieties used for the production of Red and Rosé.

Made for drinking young, "Primeur" red wines are also produced (just a few months following the harvest). It's a marketing scheme is based on Beaujolais Nouveau. The template is followed so closely that primeur wines must be made from the Gamay grape and are released for sale on the third Thursday of November (like in Beaujolais).

The white wines are made of Mauzac, Sauvignon Blanc and / or Muscadelle, Len de l'El and Ondenc, local grape varieties. The appellation makes all sort of wines: Table wines, dessert wines and sparkling wines.

Bought by Patrice Lescarret in 1993, the Domaine was re-baptized “Causse Marines” for the two main geological factors of the area: “Causse” because the Domaine is located atop a Causse, referring to a limestone-calcareous plateau of a certain elevation, proper to most regions et department in and near the Massif Central. “Marines” because it is the name of the little river gently flowing down at the bottom of the property, consequently creating a natural boundary with the neighbors and a good source of water and moister for the surrounding Nature.

Patrice was brought up drinking mainly Bordeaux wines until the age of 16 years old, which usually doesn’t help to be humble and open-minded. And when you know that shortly after he attended the famous "Institute of Oenology of Bordeaux", one will understand the prejudices and lack of objectivity of the boy. Fortunately, his experienced outside of Bordeaux brought him back to reason and lucidity regarding the wines from other regions than Bordeaux. First employed in Sancerre and then manager in Provence, he naively performed his classes before unconscientiously jumping in his new life to run his own Domaine in 1993 in Gaillac.

He learned his first lesson when he understood that to make some wine, one needs some grapes! Started with only 8 hectares that he bought from a local paisan and rapidly extended to 12 hectares, the Domaine is now run by Patrice and his wife Virginie Maignien (who first arrived at the Domaine to do the harvest in 2005 and ended-up staying longer, in her words: "she fell into a trap"), who, with their team, put all their efforts to produce great, Natural wines predominantly crafted with the local, originally cultivated grapes, meaning no clones and rigorous “massale” selection when replanting or grafting.

Despite their numerous efforts to convince the ones in charge of the Appellation to make some changes to rectify the rules, be more flexible and accept the wines of Patrice as part of the Appellation, most of Patrice’s wines are predominately sold as Vin de Table (except a few in AOC), because beyond the rule permitted by the Appellation. However, Patrice doesn’t give up and proudly continues to follow his goals and ideas, putting his dedication and personality in each bottle by producing high quality wines from old vines under Demeter certification, hence certified biodynamic and biologic, meaning: no herbicides, no pesticides, no synthetic or any non organic derivate products, low use of sulfur.

The 12 hectares are planted with Syrah, Duras, Braucol, Prunelard for the reds and Jurançon Mauzac, Ondenc, Loin de l’œil, Muscadelle, Sémillon… and Chenin the whites. Yielding are kept to a minimum, between 13 to 30 hl/ha during the last 10 years. Of course, vineyard’s works and more especially harvests are done by hand. Letting the wine start and finish the fermentation, no addition of yeast or unnatural chemical, minimal intervention and light fining or / and filtering makes for natural vinification.

To conclude with a few words from Patrice and his great sense of humor: “one can make biodynamic wines without having long hair and smocking grass; and one can produce natural wines that do not smell like the fart of a cow!”

From his Gaillac estate, Patrice craft quite a few wines: 4 whites, 3 reds, 4 sweet wines, 1 semi-sweet and a sparkling wine.  I invite you to go to his website (http://www.causse-marines.com) to read a bit more about his other wines, because strangely enough, the wine of today from Patrice Lescarret under the Causse Marines label with a clown face on it, doesn’t come from Gaillac but neighboring Appellation Marcillac.

Marcillac is an even smaller appellation than Gaillac, surrounding the eponymous village, located a bit further northeast in the Aveyron departement, about 20 kilometers northwest of Rodez and about 112 kilometers west of Cahors on the same latitude.

Marcillac encompasses about 170 hectares of vineyards planted in red clay soils rich in iron oxide that are known locally as rougiers. The individual plots either cling to steeply sloping hillsides or are cut into terraces, facing south and therefore ensuring ideal ripening conditions. The main variety grown (90 %) is Mansois, the local name for Fer Servadou. The remainder is made up of Cabernets: Cabernet Sauvignon and Cabernet Franc. This particular red wine tends to be tannic and rustic in character, with predominantly raspberry aromas. Some rosés are also produced locally but rare to find on the export market.

The grapes for the following wines come from vineyards around the village of Salles-la-Source, a little village about 13 kilometers northwest of Rodez, on the road to Marcillac. 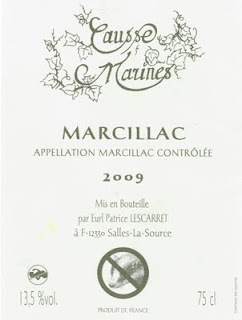 Crafted with 100% Fer Servadou from old vines, the 2009 Causse Marines Marcillac is an amazing wine. Fairly dark in the glass, with good intensity, it seems slightly blurred surely due to light or no filtration with an attractive purple hue.  The nose offers fresh, earthy aromas of mixed red and dark berries; touch of plum, red and blackcurrant intermingled with Terroir oriented hints of spices, garrigues, earth, biter chocolate and smoke. The generous and structured palate is also earthy and slightly esoteric, seems rustic but in a good way, enhanced by great acidity and minerality. The flavor’s profile follow the ones on the nose accentuated with more soil and Terroir characteristics, and again, blackberry, plum, chocolate, spice and more garrigues. The ripeness of the fruit comes from the age of the vines, but also from the quality of the vintage and the exposure of the vines.  The long finish boasts good tannic structure and texture, give this wine a nice ageing potential.

A bit tight at first, it will need a decanting and at least half an hour to open up and deliver fully all of its features. Highly recommended, this earthy wine from the southwest of France deserves to be drunk with substantial food and stews: grilled steak, Saucisse Lentilles de Toulouse a la Graisse d’Oie (goose grease), Cassoulet, Pot-au-Feu, Barbeque, etc….

Info partly taken and edited from the winery website at http://www.causse-marines.com

Step into the Green! Drink more Biodynamic, Biologique and Organic wines and spirits and food) from sustainable culture and respect the environment! Support the right causes for the Planet and all the people suffering all around the globe! Also follow projects and products from the Fair Trade, an organized social movement and market-based approach that aims to help producers in developing countries obtain better trading conditions and promote sustainability. Also support 1% for the Planet, an alliance of businesses that donate at least 1% of their annual revenues to environmental organizations worldwide. "Commerce Equitable" or "Fair Trade" is evidently and more than ever a needed movement connecting producers and customers, to be aware of others and their cultural and traditional products based on high quality, natural components and craftsmanship.
Posted by LeDomduVin at 3:47 AM