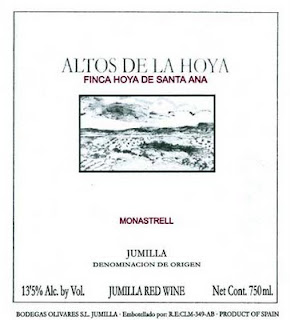 Olivares Altos de la Hoya Jumilla Spain
After joining the E.U. in 1986, the Spaniards started to rebuilt their country with a bit of help from the European Union. In the 90's, they revamped their own image and experienced a serious increase in both tourism and real estate markets. The first decades of the 21st century (which isn't even finished yet) saw the implosion and explosion of the Spanish's culture, food and wine. As of 2009, Spanish wines remain in the top tier of the most selling wines in the US market.

As Spain's winemaking revolution flourished, one of the emerging hot spots was Jumilla. Jumilla is a small appellation located central-eastern Spain near Yecla and roughly 60-70 kilometers west of Alicante. Jumilla was one of the few places in Europe spared during the Phylloxera epidemic of the late 1800's. Virtually everywhere on the continent, vineyards were devastated and, to this day, can only be planted on grafted hybrid-American rootstock (more resistant to the Phylloxera insects). For Jumilla, the key to its vineyards' survival was their sandy soil - which is anathema to the Phylloxera insect. And as a consequence, today Jumilla not only has some of the oldest vines in Spain, but certainly the largest number of ungrafted vines.

Most of the region is planted to Mourvèdre, locally know as Monastrell. Jumilla's summers boast hot days and cool nights, resulting in fantastically ripe grapes with good acidity. Bodegas Olivares's vineyards are in the northernmost zone of La Hoya de Santa Ana. This is the coolest subzone of Jumilla, with sandy, lime-rich soils that produce intensely aromatic wines.

The robe is quite dark, medium intensity, ruby hue. The nose is earthy, dry and a touch floral with dark berry aromas. The attack and mid-palate are quite juicy mixing ripe red and dark berries with earth, spice and almost garrigue-like flavors. The finish is dry, earthy and slightly spicy with dry tannins. Overall, this wine is a good quaffer, bistro-isch juice in a bottle. It definitely needs a bit of food, like tapas, "hors d'oeuvres" or "charcuterie". Pleasant, simple and a bit rustic yet easy going. The tannins can use a bit of time but food will help mask them and round up the finish.

Step into the Green! Drink more biodynamic and organic wines (and food) from sustainable cultures and respect the environment.
Posted by LeDomduVin at 9:48 PM