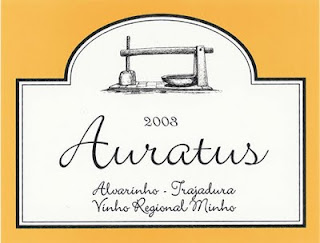 You've probably tried many Albariño from the "Rias Baixas" and other regions of the north western part of Spain, in Galicia. But did you ever try an Alvarinho from the Vinho Verde region in the "Vinho Regional Minho" appellation, Portugal? Probably not, so here is one that you should try: 2008 Quinta do Feital "Auratus" Alvarinho-Trajadura.

But before I describe the wine, here is a little explanation about the appellation and the region: Vinho Verde is a Portuguese white wine (but also a region of the same name) produces in the Minho region, located in the far north-western part of Portugal, along the Minho river which is the natural boundary between Spain and Portugal.

Vinho Verde is located on the south bank of the Minho river, in Portugal, opposite to the "Rias Baixas" appellation in Spain. The name literally means "Green Wine", referring to its youthful freshness rather than its color, altough certain wines may have green-isch reflects.

Vinho Verde wines are light and fresh, and are intended to be drunk within a year or two after bottling, the fresher the better (like Txakoli wines in the Basque country). Although, they do not quite qualify as semi-sparkling wines, they do have a definite pétillance or slight pearling on the tongue. Very fresh and summery, due its natural acidity, Vinho Verde is usually dry yet fruity (and I do not mean sweet for the 1,000th times) with floral and mineral aromas, more or less distinct and concentrated depending on the blend, the different grape varieties that constitute the blend and of course the syle of the winemaker.

Although, it is more common in the US market to find white Vinho Verde, the region and the diverse appellations and sub-appellations also produce some Rosé(s) and some red(s). A few examples of the Rosé are quite popular in New York, like Casal Garcia Rosé; the red are less known and not always available in the US market due to barely existent demand.

Vinho Verde white wines are pale yellow lemon colored, around 9 to 11% alcohol, and are made from local grape varieties: Loureiro, Arinto, Trajadura, Avesso and Azal.

Vinho Alvarinho is made from Alvarinho grapes, from the small designated sub-region of Monção. It has usually more alcohol (11.5 to 14%) with riper fruit and aromas.

The reds are fairly intense and tannic with good acidity, and are mostly made from Vinhão, Borraçal and Amaral grapes. The rosés are very fresh and fruity, and usually made from Espadeiro and Padeiro grapes.


The fruit comes from a newly purchased estate in Seixas planted with old vines Trajadura and young vines Alvarinho. Trajudura is a relatively obscure white grape used, in this case, to add body to the wine. The Portuguese "Vinho Regional Minho" appellation is the equivalent of a French regional "Vins de Pays".

The 2008 vintage was quite difficult with ripening problems due to rainy climatic conditions and definitely not as harmonious and expressive as the 2007 vintage. Therefore, the winemaker has to leave the grape macerate for a longer period in order to increase the skin contact to extract a maximum of flavor and structure. Fortunately, the old vines of Trajadura really add texture to this Alvarinho in 2008. Moreover, the estate only farms organically and only used wild, indigenous yeast, which usually add an extra dimension, more character and layers of complexity.

So despite a difficult vintage, the 2008 Quinta do Feital Auratus Alvarinho-Trajadura Vinho Regional Minho is quite crisp with a clean, focus palate and beautiful aromatics! It has a pale yellow, gold-like color, with golden reflects. The nose is clean, fresh, inviting, mineral and attractive with aromas of white peach, white flowers, citrus peel and more mineral. The palate is quite rich, expanding, viscus, yet fresh with vivid, needed acidity and beautiful balance. The fruit flavors are bright and racy yet ripe and generous, well rounded with excellent texture and length. Although I loved the 2007 vintage, I personally found the 2008 to be really good too and very consistent. Versatile, dry, fresh and easy drinking, yet with a bit more fruit, substance and depth than you regular Vinho Verde, you should compare this wine with some of the best Albariño from Spain rather than comparing it with its inexpensive Vinho Verde sibling. Fish and shellfish will nicely complement this wine, and Vice Versa.

Info partly taken from the importer / distributor website at: www.polanerselections.com

Drink more Bio and Organic wines (and food) from sustainable cultures and respect the environment!
Posted by LeDomduVin at 11:03 PM