Before writing about Marc Hébrart, I like to talk again about Champagne:

Champagne
Champagne is a small sparkling wine region located approximately 140-150 kilometers east of Paris, predominantly surrounding the town of Reims, the Champagne capital, and expanding partly east toward the town of Chateau Thierry and partly south toward the town of Ay and Epernay, the little village Vertus and further south to the town of Troyes.

Champagne is roughly divided in 5 main regions (see my previous post on "Champagne and other sparkling wines" for more info), including the 3 main ones located in the Marne district:

Champagne is a sparkling wine produced by inducing, after the 1st fermentation alcoholic, a second fermentation in the bottle by an addition of yeast and sugar, creating some carbon dioxide which can't escape from the bottle, thus creating carbonation: bubbles.

In a few steps, here is the explanation of the various phases of the "Méthode Champenoise" (also known as Méthode Traditionnelle"):

For more info about RM, NM, etc...and the other different types of Champagne houses, read my previous post on Champagne and other sparklings.


FYI: By the way, the Champagne cork, the form of the Champagne bottles and the chalky naturally temperature controlled underground cellars were also developed around Dom Perignon's time, during the 17th and 18th century when the monk of the Champagne area discovered (or re-discovered depending on the source) roughly everything at the same time and were forced to find a solution: basically, during the second fermentation not appropriate and not well attached corks were flying all over and bottles were exploding due to the pressure but also due to external temperature too, eventually after multiple attempts and experimentation, the right bottle shape and the right cork were found and used. The natural and constant cool temperature of the human carved chalky cave underground constituted the perfect maturing place for Champagne and sparkling wines in general (but still wines too, take for example the cellars of Saint-Emilion). As a matter of fact, like in Bordeaux, most Champagne houses were built with rectangular sculpted chalky stones carved out directly from these caves.

Moreover, the traditional Champagne method, also called "Méthode Champenoise", is known since the 17th century. Although he didn't really discover it but yet was a quality pioneer in sparkling wine who developed it and somewhat perfected it, this method was attributed to "Dom Perignon" a Benedictine monk from the "Abbaye de Hautvillers" (north of Epernay). In fact the British were the first to study, understand and appreciate the desirable and attractive trait of Champagne and its bubbles.

Champagne is produced exclusively within the Champagne region of France, from which it takes its name. And because of now established international treaty, national law and quality-control/consumer protection related to local Champagne regulations, the name of "Champagne" can only be used for the wines produced in the Champagne appellation. In Europe, this principle is enshrined in the European Union by Protected Designation of Origin (PDO) status. Other countries, such as the United States, have recognized the exclusive nature of this name, yet maintain a legal structure that allows longtime domestic producers of sparkling wine to continue to use the name in certain circumstances. But otherwise, it is forbidden to call a sparkling wine produced else where than Champagne to be called "Champagne". In France, sparkling from other regions may be referred as "Mousseux" or "Crémant" or "Pétillant" (depending on the method). Other sparkling wines from other countries may mention on the label "Méthode Traditionnelle", or Traditional Method, or if the method is different, one may read "Méthode Charmat" (Charmat process or method), "Méthode Ancestrale" (ancestral method), "Spumante", "Frizzante", or even "Sekt".

In fact, it is still possible to find, in the US market, wines bearing the names of famous Appellations because during the early 1930's, most of the French wine regions' names were not well protected. Names like "Chablis" and "Burgundy" from California, for example, have absolutely nothing to do with the original names or appellations. Despite the fact of bringing more regulations about what it is possible to do or not to do for producers and growers within the limits of an appellation, the INAO ("Institut National des Appellations d'Origine") and the AOC ("Appellation d'Origine Controlée") were created in 1935 to defend and protect the name of the different Appellations and their wines against fraud and counterfeit, and especially to limit the used of them.

Champagne is a festive, bubbly, fresh and delicate drink suitable for any occasion and celebration: birthdays, weddings, communions, births, new contracts, new jobs, leaving a job or a place, complementing a brunch, a lunch or a dinner, etc... Champagne is a great treat, versatile and airy, it will surely sparkle your mind and your mood.


However, after this long article about Champagne, let's get back to our Champagne of the day: 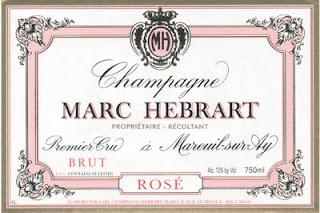 Marc Hébrart Vallée de la Marne Champagne France
Marc Hébrart is a fairly new, exciting producer from the Vallée de la Marne, producing really enjoyable Champagnes from about 12.5 hectares of vineyards planted on chalky, limestone soils with mostly 75% of Pinot Noir in the great 1er Cru vineyards of the villages of Mareuil-sur-Aÿ, Avenay-Val-d’Or and Bisseuil, complemented by 25% of Chardonnay from the Grand Crus Chouilly and Oiry in the Côte des Blancs. Marc Hébrart winery is located in the underrated village of Mareuil-sur-Aÿ, a 99% villages considered 1er Cru and home of another one of my Champagne Rosé: Billecart-Salmon.

Jean-Paul Hébrart, the current owner and winemaker, somewhat inherited of the property from his parents, Marc Hébrart and his wife, who started making Champagne in 1963. Due to the high price of the land in Champagne, they slowly and gradually bought and planted more vineyards. In 1983, their son, Jean-Paul started is own little production. In 1997, to keep and secure the lands within the family, Jean-Paul and his parents created a company (E.A.R.L Champagne Hébrart) by merging the two enterprises together, subsequently Jean-Paul became the director of this little family run company. Marc Hébrart Champagne is a Récoltant-Manipulant (RM), meaning that the Champagne house owns its own vineyards and produces Champagnes only with their own grapes and do not buy any grapes from other growers.

Jean-Paul Hébrart is somewhat a purist and a traditionalist, who prefers applying natural methods in the cellar but also to the soils and vineyards rather than using unnatural products like pesticides, herbicides, etc.. Hand selected and harvested grapes, Bucher pressing, fermentation in "petite cuvée", malolactic and hand remuage. Hébrart represents a departure from the other producers in this portfolio, for Jean-Paul’s wines marry the top Pinot Noir sites of the Vallée de la Marne with Grand Cru Chardonnay sites in the Côte des Blancs. From Skurnik point of view, Hébrart is more similar to the philosophy of Gimonnet than to that of Larmandier-Bernier, for the connoisseurs who also know these two producers. Hébrart’s wines are buoyant and lithe with deft integrations of minerality and juicy fruit, with excellent balance, acidity and length.

Disgorged in December 2007; it was made with wines from the excellent 2005 vintage, completed with the still Mareuil red (10%) coming from 2004 vintage. The base is half-half Chardonnay and Pinot Noir, and all the Chardonnay come from Grand Cru vineyards. 2005 is one loveable vintage, offering both-solid-and-ethereal wines, with great clinging fruit and a silvery aurora of chalk that almost sizzles on the brilliant finish.

Over the last 2-3 years, I tasted Marc Hébrart Rosé in many occasions and it rapidly became one of the favorite "Champagne Rosé" of my wife and I, with Billecart-Salmon Rosé and Laurent-Perrier Rosé. The last time was for the 3rd birthday of my son last week-end, and once again, it was a wonderful experience.

NV Marc Hebrart Brut Rosé 1er Cru Champagne has a light, pale salmon, pink color with captivating reflects and is already pleasing to observe in the glass. The nose is fresh, clean, delicate, mineral, floral and inviting. The palate is quite impressive, somewhat light, delicate and almost fragile in the attack yet expanding nicely in the middle palate with light raspberry and vivid red berry flavors complemented by rose petal, floral notes and lifted by a great, racy acidity. The lingering finish is quite dry with dry red cherry and raspberry notes. Overall, it is a well crafted, very feminine Champagne with a complex and seductive yet friendly and approachable attitude. I loved it everytime I tasted it, and this last time was no exception. Highly recommended for the lighter, less rich and yeasty, yet sophisticated and balanced Champagne's lovers.

Step into the Green! Drink more Bio and Organic wines (and Food) from sustainable cultures and respect the environment!
Posted by LeDomduVin at 10:11 PM