Tonight, a few hours ago, I was faced with a problem. No wine to drink with dinner... What a dilemma for a French guy, more over a wine buyer and wine lover, like me!

Should I go to the nearest wine store, the closest one to my house, which also happens to be the place of my first job in a wine retail store in Manhattan, knowing that the price are great and that I wouldn’t mind opening a bottle of Marqués de Riscal 2004 Reserva (we drank quite a few of them and still not bored of it), which is one of my wife and I favorite Rioja wineries (a touch commercial now and less traditional, but consistent and reliable), or should I just try to have a look in my small wine fridge among the bottles that we normally keep for good occasions to find a fortunately misplaced bottle of what ever it will be.

Well, it was cold and rainy outside, so I opted for the second choice: the wine fridge. Curiously (or not for those of you who know me well), most of my precious bottles, the ones that I keep jealously and represent sentimental memories, are mostly from the Rioja region in Spain.

Strange, for a guy coming from Bordeaux, one might have expected finding a few Margaux, Saint-Julien, Pessac-Leognan, Saint-Emilion, Pomerol, Côtes de Castillon and Côtes de Bourg, which are some of my favorite Bordeaux appellations… yet none! In my mother and father’s houses, yes, but none in New York!

However, searching among the few gems laying down at the bottom of the wine fridge, I found a bottle of 2001 Marqués de Haro Selección Especial Rioja Haro Spain. This bottle was offered to me a while ago, but I don’t remember if it was while working as one of the host for the PJwine.com Spanish wine festival (which is by the way one of the best Spanish tastings in NYC) or if it was when I last visited the winery in 2006.

Despite the fact that it was a 2001 vintage and that I surely should have kept it for a few more years, and that the wine, despite its expensive price ($85-$95 in NYC), had no sentimental value, except may be the fact that I tasted it at the winery when I visited La Rioja Alta winery a few years ago... I needed a wine for tonight’s dinner, so why not? After all, why not treating ourselves with a good Rioja, everyday is a good occasion, after all, you’ll never know what might happen tomorrow, so might as well enjoy it today.

On July 10, 1890, five Basque and Rioja-based vine growers created "SOCIEDAD VINICOLA DE LA RIOJA ALTA" which was and still is known as the Haro Station District. This was the beginning of a fascinating business venture in which the only dream of the five founders was to craft and age high quality wines.

The open-minded spirit of Rioja’s wineries and winemakers of nowadays, towards other European technologies and ideas, was already present in the region and in La Rioja Alta S.A. winery from the very beginning. Mr. Vigier, a French expert, was hired as technical manager and, soon after, the vinification and ageing processes were changed to what is now known as “classic” vinification. Shortly after, the company changed its name to "LA RIOJA ALTA" in 1891.

To shortly explain what happened since, here is a little history sequence taken the winery website with a few personal comments:


Always eager to grow and diversify their wine portfolio, and after a long, but thorough search, which started in 1989 with the purchase and plantation of the first vineyards, 1999 to 2001 saw the construction of a new, state-of-the-art winery called Bodegas Y Viñedos Áster, located in Anguix (Burgos) in the Ribera del Duero Designation of Origin.

Now fully developed and equipped, producing a wide array of wines allowing them to satisfy the need of their customers and to be represented in all the major markets around the globe, La Rioja Alta is now focusing on innovation, better quality and adaptation to the rapidly evolving changes occurring in the wine world.

During my last visit at La Rioja Alta S.A, in April 2006, we had the chance to taste some wines at the barrel from the fantastic 2004 vintage and the already opulent 2005, but also had the privilege to go upstairs in the magnificent tasting rooms, sitting around a huge wooden and glass table, tasting some of the experiments of the winemaker who was actually genuinely asking us what will be better for the American consumers and make us taste different blends that we gratefully described and commented. He was trying and experimenting different blends to offer more appealing wines to certain markets, yet remaining true to the quality and the image of La Rioja Alta and the classic taste of Rioja. What a challenge for this innovative and daring winemaker named Julio Sáenz. Spending a few hours with this man, tasting and talking about wine and vinification process, really taught us how complex, precise, fragile and exciting the job of winemaker can be.

After this little parentheses that brought us back in the history of La Rioja Alta winery, let’s go back to our wine of the day: the 2001 Marqués de Haro Selección Especial.

So as previously said, Marqués de Haro was born in 1985 in the Experimentation Hall, as the result of a research program to expend the portfolio and complete the range of produced wine, with a high quality wine and a slight different profile in mind.

Supervised by Julio Sáenz, La Rioja Alta’s oenologist, the blending and experiments are all conducted in the winery's Experimentation Hall. The primary purpose of the Experimentation Hall is to study the different factors affecting the quality and style of the wines, in addition research is also focused on new wine market trends so, in cases like this, they also make completely new wines (like some of the new blends that they were tasting on us back in 2006).

It is a fairly new project based on the old traditional Rioja’s way to blend the influence of the different oak used for the barrels and respect the aromas and flavors from Rioja’s grape varieties: Tempranillo as the base and foundation of each wine, blended with Graciano, which adds elegance and freshness. 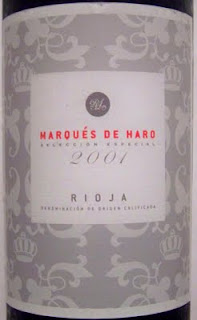 2001 Marqués de Haro Selección Especial Rioja Haro Spain
Suggested retail price $85-$95
Although La Rioja Alta S.A wines are imported/distributed by Michael Skurnik in NYC, I do not think that Marques de Haro is available in the US (I may be wrong…) and Skurnik doesn’t seem to carry it.

There again, I’m not too sure and the winery website doesn’t mention it, but it seems that Marqués de Haro Selección Especial is only produced in certain vintage, after this 2001 vintage, the current release is the 2005. It also seems that some rare magnum and double magnum of Marqués de Haro Gran Reserva were produced in the late 80s, there again it only happened for special occasion or specific vintage, like 1989.

The 2001 Marqués de Haro Selección Especial is roughly a blend of 85% Tempranillo from a selection of old vineyards in Briñas and Villalba, planted on clay loam soil, and 15% of Graciano from the Melchorón vineyard in Rodezno, on sand soil, respectively trained in respect of the grape and its need depending on the type of soil. After about 9 days of alcoholic fermentation at a controlled temperature, the fermented wine remained with its skins for 7 days in order to ensure the required structure and color. Malolactic fermentation took place in stainless steel tanks for 35 days, after which the wine was transferred to casks in the Experimentation Room in May 2006. Oak ageing process may differ depending on the vintage, but approximately, the Tempranillo was aged in 60% new French and 40% American oak casks, whereas the Graciano remained in new American oak. After 12 months in the cask, and being racked by hand twice after 4 and 12 months, it was bottled after a slight filtration process in July 2003.

Just out of the temperature controlled wine fridge, the 2001 Marqués de Haro Selección Especial was a bit cold but already promising features. In the glass, it showed a bright, garnet color of light to medium intensity, enhanced with slight brick reflects. I let it rest for a little while to bring it at room temperature. After a few minutes, it already released an attractive perfume. The very expressive nose was fresh, refined and vibrant, with red cherry and spicy oak aromas intermingled with layered nuances of red berry and darker or riper berries, spices, lead pencil, leather, somewhat ripe figs, earth and tobacco. Somehow, dark, tight, slightly tannic, austere and woody when cold, now that it was at the right temperature, it was far more open, soft, silky, almost feminine and beautifully balanced. Light to medium bodied, For a Selección Especial I was expecting a richer style of wine, but I was far from being disappointed, on the contrary, I even liked it better this way. Bright red cherry and spicy oak aromas lifted by an incredible, refreshing acidity and framed by very integrated, finely chiseled tannins, up until the long lasting finish. Somewhat delicate, refined and charming, this wine is another proof of the high quality wines crafted at La Rioja Alta, S.A, and an outstanding example of how good the acclaimed and now classic 2001 vintage was in Rioja. A “must have” wine for amateurs and connoisseurs of traditional, old school Rioja wines.

Info partly taken (and edited) from the winery website at www.riojalta.com and photo from the opened bottle at home.

Step into the Green! Drink more Biodynamic and Organic wines (and Food) from sustainable culture and respect the environment.
Posted by LeDomduVin at 5:32 PM