Vallee d'Aoste: high altitude undiscovered wine gems
Vallee d'Aoste (in French) also known as Aosta Valley (in English), and Valle d'Aosta (in Italian) corresponds to northwestern part of Italy, bordering Switzerland to the North and France to the west, and Piedmont to the southeast. A narrow valley surrounded by magnificent mountains, sculpted a long time ago by the melting glaciers, where Romans have tamed a bit of land to grow the blood of the earth: wine.

The main town, located in the middle of this area at the bottom of the Valley of the same name, is Aosta, hence the name of the appellation. A few more towns, or villages should I say, as important as Aosta, also deserve to be mentioned: Quart, Chambave, Morgex, La Salle, Chatillon, Gressan, Sarre & Saint-Pierre (and a few more).

Following the valley bottom-land and passing by these quaint "mountainous" villages, nicely curves of the Dora Baltea, also known as Doire Baltée (in French), the main river of the Valle d'Aosta, descending from the highest mountains of the Alps, the Mont-Blanc and joining the Po river to the west of the town of Crescentino.

Valle d'Aosta DOC (Denominazione di Origine Controllata) roughly stretches from the town of Courmayeur to the west (close to Mont-Blanc) to Verres to the south-east, with sloped vineyards (around the villages) planted on the foothills of the diverse surrounding mounts: Monte Fallere, Monte Faroma, Monte Emilius, etc..., primarily on the eastern part of the Dora Baltea river, with Aosta as the main wine capital.

The region is divided into three main vineyard areas:

From all the cited-above grape varieties, Valle d'Aoste produces racy, vivid, crisp, usually light, fruity and playful, yet balanced, harmonious and mineral, very versatile red, white and sparkling wines (and rare few roses) that are worth trying and discovering over earthy meals.


We just bought two great Vallee d'Aoste wines for the store (from two of my favorite wine importers, who happen to be part of the rare breed of the most Terroir-driven-and-authentic-wine-finders in America: Rosenthal and Dressner), and the two sub-division areas of concern for today's post are: Quart and Torrette.


Quart is a remote little village of Valle Centrale, located east Aosta, producing mainly red wines from Gamay and Pinot Noir, planted at slightly different altitude about 2500 feet (760 meters) above sea level, on slopes mainly facing south with ideal drainage (obviously, it is in the mountains...) and sun exposure, in the southern foothills of Monte Faroma.

Grosjean Frères winery is located on the border of the towns of Quart and Saint Christophe in the Valle d'Aosta, a small mountainous region of the Northwestern part of Italy. The vines planted initially, in addition to the traditional Petit Rouge, were Gamay, Pinot Noir and Petite Arvine, and currently are growing even as the native Fumin, Cornalin, Prëmetta and Vuillermin.

Although the family has for centuries made and keep wine (and nuts) for the long winter months in the mountains, everything really started in 1969, when the family members began to bottle their own wine for presentation at "The Exposition des vins du Val d'Aoste". It was this exhibition that stimulated the initiative that brought the company from 3,000 square meters to the actual 7 hectares of vineyards, with the involvement of the 5 children, thus the name "Grosjean Frères" (meaning Grosjean "brothers" in French).

Grosjean Frères is part of the Association of "Viticulteurs Encaveurs" Valdostan which brings together 24 small producers who were able to characterize the quality and typicality of their wines produced in the Valle d'Aosta DOC. This group of tenants has a close relationship with the land (Valle d'Aosta) and personally follows all stages of production, from vineyard to cellar to retail sale. The "Viticulteurs Encaveurs" devoted great attention to farming techniques and traditional vinification - handed down from father to son - and both are compared to new ideas and technologies, always with a view to use friendly and natural agriculture.

This wine is 100% Gamay from high altitude vineyards, from 600 to 750 m altitude, planted on steep slopes (30-60%) of loose soil of moraine with ideal south and south-west exposure. The wine was crafted in stainless steel tanks where it underwent a short maceration of 4-5 days, which explain the light color, and was then fermented. After fermentation, the wine rested for at least 3-6 months in stainless steel tanks to keep the freshness before bottling. 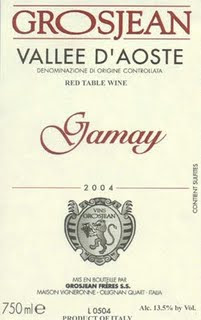 2008 Grosjean Frères Gamay Vallee d'Aosta is a great wine with lot of focus and brightness. Passed its light, bright transparent, red-ruby-pinkish-red onionskin color, the nose offers vivid mineral, light red cherry and floral notes intermingled with earth and smoke. The palate has an excellent balance with broad, quite deep red fruit flavors, well-integrated tannic structure and a racy, lifting acidity nicely carrying the fruit. The finish is quite dry yet juicy and refreshing with dry red cherry, flowers and more mineral and earth.

Overall, even if not your everyday wine, this high altitude Gamay is really good with a beautiful, very broad smooth mouth-feel full of freshness. Serve it with simple dish like pasta, cold cuts and soups, or even fish.

The red wines made in Torrette DOC must be crafted with at least 70% of Petit Rouge grapes, which can be blended with Pinot Noir, Gamay, Fumin, Vien de Nus, Dolcetto, Majolet or Prëmetta. Torrette is a light-medium red wine (12°-13°) which can be served throughout an entire meal. It is ideal served with meat, excellent with roasts and game, but also local sliced pork meat and mature cheese. The Supérieur version, produced from the sunniest vineyards with a limited production per hectare, differs due to its greater concentration of grapes and more prolonged aging.

Noussan, like most Val d'Aosta wines, is a tiny family owned winery by Franco Noussan.

Franco Noussan is somewhat of a “garagiste” in St Christophe, a little village located in the hills northeast above the town of Aosta. His cave is dug into the hillside and is literally an extension of his garage. He is a teacher at the local university in Aosta and when not teaching, he likes to work in the vineyards and make wine and eaux-de-vie.
The grapes are from small family parcels in different areas near St-Christophe. In 1999, his family acquired vineyards from his wife Gabriella’s side. They were all old vines vineyards, the majority over 70 years, planted in Petit Rouge, Mayolet, Fumin and Pinot Gris. The vines are all over 40 years and the majority much older. In 2003 he also began renting some vineyards and now has about 5.5 hectares of surface. The vineyards are worked without herbicides and are plowed. The yields are kept small. He started making wine just for the family’s and friends’ consumption, but then began bottling and selling the wine in 2005 under his own label.

The grapes are harvested by hand, the fermentations are made with indigenous yeast in stainless steel tanks, pressed using a hand press, then the wine is aged in smaller oak barrels from a year to 14 months. The wines are bottled unfiltered. All of this done in Franco’s garage/cave.

His "Torrette" is mainly crafted with "Petit Rouge" (over 70%) blended with other indigenous grape varieties like Mayolet, Cornalin and Vien de Nus. 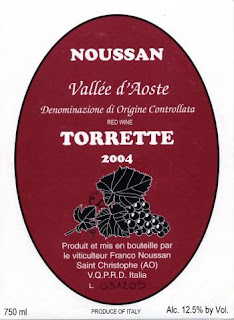 Not to compare it with the previous wine, because of the different grape varieties (Gamay for the previous one and Petit Rouge for this one) and area of production, but this wine has a deeper color, dark red ruby with nice reflects and a somewhat less austere, more playful attitude, although it is also less complex or serious in a way, but much more approachable and inviting for a wider range of palate.

The gamay from Grosjean is a bright, serious, delectable red wine that I enjoyed very much, but this Torrette from Noussan is such an interesting wine too, that has somewhat more fruit to offer for a similar price, which makes it quite irresistible.

Fun and playful in the palate, it displays generous and ripe red cherry and wild berry flavors mixed with floral and mineral notes. The wine is really integrated and really juicy. Soft, mellow, friendly, we drank it over a piece of bucheron goat cheese and it was delightful. Along with the fruit, the balancing acidity and the mineral side of this wine constitute the main enjoyable features of this lovely, undiscovered wine. It was so easy to drink that we finished the bottle in no time.

Step into the Green! Drink more Biodynamic and Organic wines (and Food) from sustainable culture and respect the environment!
Posted by LeDomduVin at 11:38 AM