When Dominique Simon, owner of "The Wine List" (a small wine company importing wines mainly from French Appellation and lesser known regions of the world producing more food oriented wines from smaller, more artisanal producers), brought some wines from Michigan, I was both nicely surprised and intrigued.

That's true, when most people, wine connoisseurs included, think about North American wines, the first states that come to mind are: California, Oregon, Washington and New York of course. Lesser known from the general public but not the least in terms of quality New Mexico is also producing excellent wines, and more especially sparkling wines.

The vines were first planted through out the whole country by the settlers and the monks but mainly persisted in the 5 states mentioned previously (California, Oregon, Washington, New York and New Mexico). When you think about it, only 30-35 years ago, somewhat before the "Jugement of Paris" (1976) put California on the map of the world-class wines and confirmed it as a serious wine producing area, nobody in the rest of the world, except maybe within the US and a few open minded and traveled Europeans and Asian, knew or even had any interest about California wines (and even less about the other American regions).

Although California is established and Oregon and Washington are rapidly increasing in popularity, and New Mexico is up-and-coming, even as of today, little is known about most New York wines (which should be an interesting post to write about, check my blog within the next few weeks for more New York wine descriptions).

However, 30 years after, California, Oregon, Washington, New York and New Mexico are the leading "American Viticultural Areas" (AVA). Some of you may wonder what I'm talking about, so here is a little explanation: like the "Appellation d'Origine Controllée" in France (AOC); "Denominazione di Origine Controllata" (DOC) in Italy; "Denominación de Origen" in Spain (DO); etc... the United States came up with their own control system of Appellation and indication and classification of viticultural areas.

The Wine Institute (of California) has a "somewhat" confusing kind of way to introduce the subject, here is what their website says:

"When a US winery wants to tell you the geographic pedigree of its wine, it uses a tag on its label called an Appellation of Origin. This tag must meet federal and state legal requirements. A lot of people believe that the term appellation of origin is synonymous with viticultural area, but that's not the case. As of this writing, there are a little over 160 viticultural areas that have been established in the United States by the Bureau, Tobacco and Firearms and about 93 are in California. No sane person can name them all without referring to the list. " - Wine Institute

It is confusing to me because "to tell you the geographic pedigree of its wine, it uses a tag on its label called an Appellation of Origin" (which is logical like in France and elsewhere in Europe) but "people believe that the term appellation of origin is synonymous with viticultural area, but that's not the case.", which somewhat contradictory (IMO) and doesn't say much about the AVA.

So after browsing the internet and a bit of help from Wikipedia and a few other articles, I came to the conclusion that "AVA" (American Viticultural Areas), unlike most European wine appellations of origin (WAO better known as AOC), only specifies that:
The weird thing is that an AVA can be as big as it can be very small, making it even more difficult to understand or visualize, ranging in vastly opposite size; i.e.: the Ohio River Valley AVA extends over 26,000 square miles (67,000 km2) across four states, while the Cole Ranch AVA in Mendocino county in California covers only 62 acres (25 ha).

The Ohio River Valley AVA situation most not be easy when you know that "The wine must also have been made to "conform to the laws and regulations of the named appellation area governing the composition, method of manufacture, and designation of wines made in such place." This clause protects and defers to theauthority of each State to regulate methods of wine production." (text taken from www.winepros.org) because this particular AVA extends over 4 states, so how can they deal with this situation? Even with sub-AVA(s), it must be a real headache!

FYI: The Augusta AVA near the town of Augusta, Missouri was the first recognized AVA, gaining the status on June 1980.

However, to come back to the lesser known wine regions of the US, most don't probably know it and don't even realize it, but, out of 50 states in the US, 38 states regrouping the 193 AVA(s) (as of February 2009, including registered, pending and proposed), produce their own wines made from grapes growing in the AVA(s). The other 12 states also produce wines from grapes or fruits but have no designated AVA. You can easily find listing of this AVA on multiple websites.

When I say that it is confusing, no offense to anyone, but it is only because this system is young and doesn't seem to prohibit the use of certain systems and doesn't limit the amount of AVA that could be designed in the future. There again, it is a question of culture and time, because in Europe, along its long and tumultuous history, it also probably started that way with the Romans and was slowly perfected and delimited by the monks, the growers, the wine merchants, the négociants, the nobles and other rich "Bourgeoise" family who owned most the land until the end of 19th century. History, time and tradition sculpted the European vineyards over many centuries.

The US are only at the baby stammering stage or relative infancy of their wines and vineyards control system. Without achieving the same heavy European administrative, financial and political excesses, hopefully with time this system will be more restrictive, strict and more specific with more control at many levels in order to respectively better delineate the boundaries, the typicality of the soils, micro-climates, the type of grapes, the vinification used and all the other important factors that characterize the origin and the quality of a wine and obviously influence and impart its taste.


Enough about the AVA, let's discover together this juicy wine from Michigan that I just bought for the store from (as I was saying at the very beginning of this blog) Dominique Simon, owner the "Wine List" importing great little wines at excellent prices.

I bought the following Gamay wine from Chateau Grand Traverse for three good reasons: first: the wine is quite juicy; secondly, it is good to be open minded and welcome wines from lesser known regions in the US; and thirdly, because my wife told me that she worked in a summer camp right after college or high school (I don't remember...) in Traverse, so I bought it with her in my mind too. 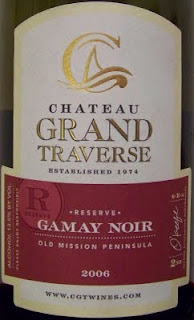 Founded in 1974 by Edward O’Keefe, this family-owned and operated winery is the oldest and largest commercial winery and vineyard operation in northern Michigan.

When you think of Gamay Noir, the first Appellation that comes to mind is Beaujolais. For many of us, Beaujolais only represents "Beaujolais Nouveau" (soon to arrive in the store, by tradition, the 3rd Thursday of November each year) which doesn't inspire anymore and usually triggers strange, disgusted expression of antipathy on the face of your interlocutor. However, the "Crus" Beaujolais are much better and traditionally labeled with the name of the village of origin: Morgon, Fleurie, Moulin a Vent, etc...

Well, in my opinion, Chateau Grand Traverse Gamay Noir 2006 vintage is like a well crafted "Crus Beaujolais". This reserve quality red wine is a blend of roughly 96% Gamay Noir and a touch of Cabernet Sauvignon. It was aged for 20 months in small partly used oak barrels, thus "Reserve". the resulting wine is quite juicy, earthy and balanced. The robe is quite dense, bright, ruby red color with medium to light intensity. The nose bursts attractive fruity aromas of red berries, with distinct tart cherry, tough red plum mixed with earthy, black pepper notes. During its ageing period in barrels, it developed wonderful depth and complexity. The palate is quite juicy, bright and racy, a touch tart some may say, but very well balanced and fairly long with vivid ripe red cherry flavors intermingled with hints of spices, pepper and oak, leading toward the earthy and slightly smoky finish framed by integrated tannins.

Quite lovely I must say for my first Michigan wine, a bit high in acidity but nice fruit overall, juicy mouth-feel and pleasant texture. A very good example of Gamay Noir that will enhance savory foods such as grilled venison, stuffed bell peppers, grilled salmon, roasted duck, or wild mushroom pizza. At room temperature, it was perfect.

Step into the Green! Drink more Biodynamic and Organic wines (and food) from sustainable cultures and respect the environment!
Posted by LeDomduVin at 9:46 PM