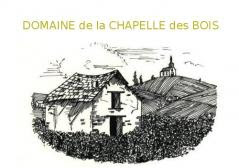 Chapelle des Bois Fleurie Beaujolais France
Located just about 50 kms north of Lyon and 15 minutes south of Macon, "Chapelle des Bois" is a "lieu dit", located at the southern entrance of the village of Fleurie, one of the Cru Beaujolais in Burgundy.

For those of you who might wonder what a "Lieu dit" is? Here is an explanation.

In the medieval time (between the 5th and 15th century and probably before that), when the land lords (Bourgeois, Aristocrats and other King's court usual suspects like Dukes, Barons, Princes, Knights, etc...) used to reign over the peasants (farmers, growers, blacksmiths, etc...), names were attributed to agricultural and viticultural small parcels of land or vineyards as well as small community neighbors (small group of houses in the middle of fields usually inhabited by the cited above peasants).

These names were often given after specific landmarks (like Chateaux, Churches, Cloisters, Domaine, etc..); small parcels of land (agricultural or not) or vineyards with specific Terroir characteristics (often related to the soil's composition or the predominant plants or trees) and also the predominant family name of the designated area (usually related to their place of origin or their job, which often became with time their last name too). Time passed yet traditions remained, even up until today, the "Lieu dits" still exist and find their stronger meaning and sense of place in the vineyards all around France.

Depending on their Terroir characteristics and their qualities, also depending on the region, they became what we now know as the "Grand Cru", "1er Cru" and other strange additional names on the labels that are so characteristic to the French wines. More especially in places where traditions still prevail like in Burgundy, Rhône, Alsace and the Loire Valley. One can also find quite a few in Champagne and the Languedoc; and just a rare few in the Southwest of France (Cahors, Madiran, etc..) and a fair amount in the eastern part of France, in Savoie and Jura. But barely none in Bordeaux for example; which is strange because, like most of the entire countryside in France, Bordeaux possesses a lot of "Lieu dits" morceling (dividing) the small villages and the surrounding lands into giant puzzles, sometimes difficult to understand if you didn't grow up in the area, yet you rarely see the name of a "Lieu dit" on Bordeaux bottles.

"Lieu Dit" is basically an old French agricultural and viticultural term designating a small, delimited area for traditional and specific reasons, which has a traditional name assigned to it. "Lieu dit" has been eventually, and especially by traditions, promoted and perpetuated by the winegrowers and its typical, and now firmly established, usage translates as a "vineyard or parcel's name" or a "named vineyard or parcel or Clos". In most cases, a "lieu-dit" is usually smaller than an Appellation and could be translated as a sub-division of higher pedigree and specific Terroir characteristics within an appellation (Grand cru, 1er Cru, etc..), or even within the different vineyards of an estate (designated parcel or vineyards names).

Not to be mistaken with the late XVIIIth century "Château de la Chapelle des Bois", also in Fleurie, "Domaine de la Chapelle des Bois" is a small estate owned by the same family for the past 7 generations, which can be traced up until 1820, with Chantal & Eric Coudert-Appert, the current owner, being the last generation. In 1991, Chantal took over her father who took over the estate in 1962 from his own parents and so on.

Like in many other small Domaines, Chantal and Eric take care of everything themselves from the vineyards to cellar, and all the different steps of the vinification process. It allows them to have a perfect control and knowledge over the work done in the vineyards and in the cellar. They hand harvest the grapes which undergo their fermentation process in cement tanks. Everything is done with extreme attention to details in the most natural way possible.Their passion, care and hard work is reflected in their wines. The quality of their wines and the numerous accolades and notes of appreciations from the customers are their best rewards.

Domaine de La Chapelle des Bois possesses 8.4 hectares of vineyards located in Fleurie and Chiroubles, in the heart of the Cru Beaujolais. The little house, also called "Cadole" in French, standing in the middle of the vineyards on the label, used to exist and was used by the workers during their break for the lunch and to stock vineyard tools, but it was destroyed by the terrible storm of 1999. It was drawn quite some time ago by one of their friends, an Englishman named Peter, and they are quite thankful for it is now one of the last memory of this "Cadole", which has now a symbolic and sentimental meaning.

Made from 100% Gamay Noir a jus Blanc, from vines averaging 40 year old, planted on granitic soils, this wine underwent traditional fermentation and semi-carbonic "cuvaison" for 10-15 days in order to extract the voluptuous fruit and feminine profile authentic to Fleurie. Drinkable now and expressing bright aromas of red fruit, you can also wait for another 2-3 years, it will surely enhance the complexity of the aromas which usually come with a bit of aging in the bottle.

The 2007 Fleurie possesses a dark ruby color of good intensity. Initially slightly rustic on the nose, it offers charming cherry aromas with intense stony minerality, and some blueberry notes. At first a bit tight and earthy in the mouth, it definitely benefits of a bit of patience and a good swirl in the glass to fully express itself. The palate, once open, develops with intensely concentrated red and dark fruits complemented by great earthiness. Slightly tannic finish, the balance between the rich fruit and the acidity in this wine is the charming key. After quite a few minutes, it evolves gently and smooths out some of the slight rustic edges.

Info roughly translated from the winery website at www.coudert-appert.fr

Step into the Green! Drink more Biodynamic and Organic wines (and Food) from sustainable culture and respect the environment!
Posted by LeDomduVin at 9:41 PM