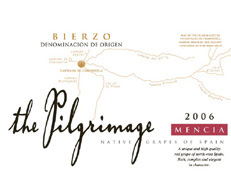 I have always been a huge fan of the red wines from Bierzo, and more especially of the Mencía grape that I personally discover while tasting my first wines from this area back in 2002, when I first arrived in New York. 8 years later, my passion continues and despite my uninterrupted experience with the wines from top producers like Descendientes de José Palacios, Dominio Tares, Pittacum, Paixar, Bodegas Estefania, Castro Ventoso, and Bodega del Abad, to name a few, I’m still discovering great new producers like Bodegas Adria.

Bierzo
Bierzo is a Spanish wine region located in the northwest of the province of León (part of the Castilla Y León district), touching the eastern border of Galicia, northwestern Spain just above Portugal. The area consists of numerous small valleys in the mountainous part (Bierzo Alto) and of a wide, flat plain (Bierzo Bajo).

Although Bierzo has existed for many centuries, it nearly disappeared with the Phylloxera plague, which devastated ¾ of most European vineyards between the early 1860s and the end of 1930s, and was only officially recognized as a “DO” (Denominación de Origin) in 1989. Since then, the region has experienced an incredible renaissance and benefited from a rapidly expanding reputation. Nowdays, the Bierzo DO covers 23 municipalities including the largest town of the area, Ponferrada, and imports a large quantity of its wines throughout the world.

Bierzo produces mostly red wines made from the Mencía grape variety, which is apparently indigenous to this area and was already used and grown in the Roman times. Producing soft, earthy, easy going, light to medium bodied, aromatic dry red wines with slight green edges and dry tannins, Mencía possesses some of the character and taste of Cabernet Franc, yet due to the climate, usually offers riper fruit and silkier, less green and more integrated tannins.

Bierzo is bordered to the west by the Valdeorras DO wine region, which as a counter part or more often considered as a sibling to Bierzo, produces mainly whites from Godello, Doña Blanca and Palomino, but also some reds, less well known in the US market, yet quite similar to those in Bierzo made with the same grape varieties: Mencía, Merenzao, Grao Negro and Garnacha.

Bodegas Adria “The Pilgrimage” Mencía Bierzo Spain
Bodegas Adria owns vineyards located between the villages of Corullón, Villafranca del Bierzo and Cacabelos, in the foothills of a small mountain range about 25 kilometers west from Ponferrada, planted in a mosaic of complex soils ranging from alluvial clay and stones on the valley floor to granite and schist higher up on the slope.

The wine is called “The Pilgrimage” because the vines in this region of Bierzo lie along the holy "Camino de Santiago de Compostela" (the path or “way of St. James of Compostela” in English or “Chemin de Saint Jacques de Compostelle” in French), a town located at the northwestern part of Spain, in Galicia, which has long been a pilgrimage center for many Christians and other pilgrims since the 9th century. The path of St. James, established over a thousand years ago, has been one of the most important European pilgrimages in Christianity for centuries, and Santiago's cathedral is one of the most visited Christianity emblems with the "Vatican" in Rome (Italy) and "Notre Dame de Lourdes" in the town of the same name (France). Native to this area, the Mencía grapes and the wine that they produce have been welcome nourishment to any passing traveler.

Made by winemaker, Norrel Robertson, "the Pilgrimage" red Bierzo was produced with 100% carefully hand harvested Mencía grapes from late September through the first week of October, from vines averaging up to 35 years old. The juice was carefully extracted and fermented in small stainless steel fermenters with some “saignée(s)” to concentrate the must (or “bleeding method”, a technique used to extract some liquid from the fermenting tanks, to maximize extraction of color and concentration of aromas and flavors in the fermenting must, and consequently in fact to obtain, aside from the main red wine, a barely tainted wine or a light rosé usually drunk locally, yet increasingly enjoying more sales overseas nowadays).

Malolactic fermentation occurred naturally following the alcoholic fermentation. The wine was left on its lees for a certain period of time to accentuate its creaminess and softness, while adding softer texture.

From the acclaimed 2006 vintage, which was great in this particular area, the Pilgrimage Red Bierzo, made with 100% old Mencía grapes, has a quite intense deep purple color with ruby reflects on the rim. The nose is fresh, aromatic with inviting aromas of ripe dark and red cherry, plum, chocolate, and spice, and earthy notes. The palate is dry, intense and juicy, yet medium bodied with soft, gentle red and ark fruits, present yet integrated tannins and an overall texture enhanced and balanced by a great acidity. The lingering finish is structured, soft and food friendly. Pair it with baby lamb and duck. Another interesting example of what the versatile Mencía grape has to offer.

For more info go to the winery website at www.bodegasadria.com

Step into the Green! Drink more Biodynamic and Organic wine (and food) from sustainable culture and respect the environment! Support the right causes for the Planet and all the people suffering all around the globe!
Posted by LeDomduVin at 12:13 AM