Montpeyroux & Domaine D'Aupilhac
Located roughly at 40 kilometers from the Mediteranean coast, northwest of Montpellier, Montpeyroux is a village and a wine region of the same name where climate is typically Mediterranean: hot in the summer, cool in winter, with occasional yet needed rainfall during the spring and autumn.

Micro climates are numerous and very diverse in certain parts of the Montpeyroux area, where vineyards are being nestled in the foothills of the high Larzac between 100 and 850 meters (2800 ft) above sea level, benefiting from cool summer nights which, together with occasional storms, help refresh the vines after the scorching daytime sun. By the way, the Causse of Larzac is a mountainous chain in the southern part of the Massif Central.

The Domaine d'Aupilhac is located in Montpeyroux, a little village some 36 kms north-west of Montpellier which gave its name to the vineyards area. The cellar, created in 1989 in the family home, is right in the heart of the village. Sylvain Fadat and his family have been growing grapes for over 5 generations.

A large part of their vines grow on south-west facing "terraces" on a site named "Aupilhac", planted mainly with Mouvedre and Carignan, and a bit of Syrah, Grenache and Cinsault. Another part of their vineyard is the north-west facing "Les Cocalières" located at an altitude of some 350m (1150ft) where Syrah predominates, though Mourvedre and Grenache also grow here too. The most northerly facing part is also planted with the four white grapes allowed in the Coteaux du Languedoc: Roussanne, Marsanne, white Grenache and Rolle (also known as Vermentino).

The land is ploughed regularly, which means the roots have to force their way deep into the cool and moistened sub-soil, thus protecting the vines from seasonal drought. They treat their land ("terroir") with great respect, with the absolute priority being to maintain its natural balance.

Harvests are done by hand, when the grapes reach ideal maturity and phenolic ripeness. The skins must be properly mature to extract the best aromas and color, as well as ensuring silky tannins. The land's natural yeasts ensure the natural start of the fermentation. The wines mature in casks and barrels in the underground cellar. The wine is bottled unfiltered at the Domaine. Their belief and motto is: “work in the vineyards has far more influence on a wine's quality than what we do in the Cellar”.

D’Auphilac red was crafted from grapes for this wine come from 13.5 hectares of vineyards planted on terraces at an altitude of 100 metres in the area known as "Aupilhac", overlooked by the Castellas, ruins of an XI century hilltop castle which is the emblem of Montpeyroux. The vineyards are planted with Mourvédre (3.5ha), Carignan (4.3ha), Syrah (2.2ha), Grenache (2.5ha) and Cinsault (0.8ha). 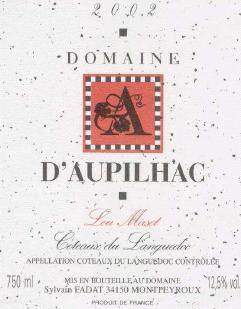 In the old Occitan language “Lenga Oc” ("Oc tongue" or "Language from Oc" or even "Langue d'Oc" in French), which eventually gave its name "Languedoc" to this vast region bordering the Mediterranean Sea in the south of France where this language was spoken for centuries by the locals, “Lou Maset” roughly signify “Le petit Mas”(or "small Mas" in English), the “Mas” being the traditional name of the old countryside houses scattered in the landscape of Languedoc and Provence.

Made with 40% Grenache, 40% Cinsault, 10% Carignan, 5% Syrah, and 5% Alicante Boucher, from vines planted on arid stony limestone where Grenache and Cinsault thrive, D’Aupilahc Red “Lou Maset” wine was fermented in traditional vats for 10-15 days, then aged for 6 months in cask. It was bottled without filtration.

Montpeyroux usually offers powerful, full-bodied yet balanced and structured wines with ripe fruit and earthy, Terroir oriented attitude, and the 2008 Domaine d’Auphilac "Lou Maset" red is no exception to the rule. Beside its dark, intense ruby color, the nose is fresh, earthy and warm at the same time, with ripe dark fruit mixed with floral and Garrigue scents. The palate is full, generous, with a lot of ripe, dark berry fruit and earthy Terroir components enhanced by a great acidity that makes this wine quite juicy and also an integrated tannic structure nicely framing all the layers and nuances. The finish is dry and slightly tight yet will settle down rapidly with a decantation and a bit of substantial food like grilled red meat, roasted leg of lamb, Cassoulet prepared in goose grease from castelnaudary or even Saucisses Lentils also prepared in goose or duck fat from Toulouse.

Info partly taken and edited from the winery website at www.aupilhac.net

Step into the Green! Drink more Biodynamic and Organic wine (and food) from sustainable culture and respect the environment! Support the right causes for the Planet and all the people suffering all around the globe!
Posted by LeDomduVin at 3:56 PM