Two days ago, my rep. from Vinaio came unexpectedly to the store with a few bottles for me to taste. Unfortunately, too busy to taste them right away, he told me that he will come back and left 3 sample bottles on the tasting table in the back of the store. The end of the day arrived sooner than I thought and I totally forget about the wines.

The next day, I asked my boss if he had the chance to taste the wines. He said “yes” and “you should taste this wine from Terra Alta, it is great Gran Reserva. I’m sure you’ll like it and the price is unbelievable”. It was about 11 am when I decided to try it. Surely the best time to do it, when the taste buds just woke up and start to crave for something to drink or to eat. And the wine was amazing!

Moreover, it is a Spanish wine, and people who know me well will tell you that I’m very fond of Spain, more particularly its food and wine in the Northern part of the country.

Startled, I decide to give a closer look to the label:


2001 Cataregia Gran Reserva Terra Alta Spain
produced and bottled by Gruporeserva de la Tierra
First, I was agreeably surprised because it came from Terra Alta, which is not so common. Then I was really surprised that it was a 2001, which was a great vintage in Spain overall. And finally, how come a Gran Reserva could be still available especially when so inexpensive? It was time to investigate to better understand this enigmatic wine that triggered such an interest to my taste buds and brain.

The wine comes from Terra Alta, an often forgotten yet up-and-coming Spanish appellation (DO), located in the most southwestern part of Tarragona, next to Priorat in Catalonia, about 180 kilometers southwest of Barcelona.

Terra Alta has recently begun producing modern style wines with similarities to other Catalan regions bordering the Mediterranean Sea. Fresh, mineral, fruity, complex and approachable, Terra Alta wines are reminiscent of the style from Monsant wines in structure and texture, yet less opulent and/or concentrated than Priorat wines. The Terra Alta now produces more modern-styled wines for the export market, yet traditional styles like the wine of today, can still be found even if they were historically made for local consumption.

Terra Alta literally means “High land”. And like the characteristic landscape of Priorat and Montsant, the “paysage” is mountainous where vines are planted on steep terraced slopes with very rugged, clay-textured calcareous soils. The dry climate is Mediterranean with continental influences tempered by the Cierzo and Abrego winds.

Although winemaking here goes back to the twelfth century, it always remained primarily a local endeavor until recently, because the rugged land consisting mainly of rivers and mountains crossing one another made transport and communications difficult.

Common to Priorat and Monsant, and Catalonia in general, the local grapes are:


Bodega Grupo Reserva de la Tierra was founded in 1972 and renovated extensively in the early nineties. State of the art facilities, excellent vineyards and focus on quality wines. It has enabled wine like Bodegas Gormaz to export of over one and half million bottles annually. They offer an outstanding selection of Jóvenes, Crianzas, and Reservas. The company is a leading Spanish winery group with both its own and partly owned wineries that is completely dedicated to producing and marketing private-label and own-label wines. Today, the Reserva de la Tierra Group (Gruporesera de la Tierra) controls the production over 2,000 hectares of vineyards, three of its wineries, and further three partly-owned wineries in well known and more prestigious wine-growing zones, such as Rioja, Ribera del Duero, Rueda, Priorat, Montsant and Terra Alta. 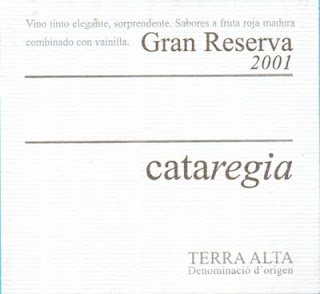 Made with 70% Tempranillo and 30% Cabernet Sauvignon, this Gran Reserva was aged for 30 months in French and American oak barrels, before spending another 2 years resting in bottles at the winery before release. Gran Reserva wines are an art outperformed only by the Spaniard, no other country in the world, not even France or Italy can claim be able to keep their wines out of the market for so long, it is a traditional costly yet rewarding process. I have yet to taste a bad Gran Reserva, which are understandably only produced during the best and most promising vintages.

The 2001 Cataregia Gran Reserva Terra Alta offers a dark red-brownish ripe cherry color with old prune reflects. The nose is clean, warm and inviting with bright aromas of dark and red ripe cherry fruit intermingled with cedar oak, spices, cacao, underbrush and slight toasted vanilla hints. The palate is rich and complex yet remains quite light and bright. It is definitely not very heavy or too opulent, like some neighboring Priorat can be. It is somewhat more traditional and earthy, with great tannic structure, excellent balance and racy acidity, complemented by enhancing juicy red fruit and oaky flavors similar to the ones on the nose. The mineral Terroir driven attitude add dimension and depth. The finish is earthy and mineral, long and pleasing, and command for another glass.

The 2001 vintage, which was an excellent vintage overall in northern Spain, is surely the reason of the addictive profile and complexity of this wine. 30 months in oak barrel + 2 years in bottles really allowed for a perfect integration of each element, and despite the fact that this wine is ready to drink now after a good hour of opening; it still shows great ageing potential.

Highly recommended, although a touch light (which I prefer anyway), it could have had a touch more fruit for some other palates, may be. However, I personally love it and it remains a superb Spanish wine from a fairly undiscovered appellation at an incredible price for a Gran Reserva. At under $15 a bottle, it is a steal! Not to be missed!

Info partly taken and edited from the importer website at www.vinaioimports.com

Step into the Green! Drink more Biodynamic, Biologique and Organic wines (and spirits and food) from sustainable culture and respect the environment! Support the right causes for the Planet and all the people suffering all around the globe! Also follow projects and products from the Fair Trade, an organized social movement and market-based approach that aims to help producers in developing countries obtain better trading conditions and promote sustainability. Also support 1% for the Planet, an alliance of businesses that donate at least 1% of their annual revenues to environmental organizations worldwide
Posted by LeDomduVin at 2:19 AM

Email ThisBlogThis!Share to TwitterShare to FacebookShare to Pinterest
Labels: My favorite wines of the moment, Red, Spain, Tempranillo, Terra Alta