This morning, my son and I decided to make Pizza for the lunch. What a mess! We first tried to knead the dough, the best we could with our hands. Things would have been better if we had had a rolling pin. Once the dough was slightly unevenly covering the bottom of the rectangular pizza pan, (but hey that was our first pizza together, so it doesn't matter), my son tried to spread out the tomato base sauce. He surely ate more than putting it on the dough.

While the oven was starting to reach the right temperature, we put a few tears of olive oil on the sauce, and spayed out a first layer of grated Italian cheeses, then added a thick layer of grated Mozzarella. Here again, my son, for each handful of grated cheese put on the Pizza, another handful was disappearing in his month. We then covered the layers of cheeses with as much pepperonis and mushrooms as we could, leaving a small line only with cheese just in case. Then another layer of grated Mozzarella and other cheeses with a last sprinkle of olive oil. Once satisfied by the way it looked, we put it in the oven and waited until ready to add a little touch of white truffle oil atop to add more flavors, just before serving. 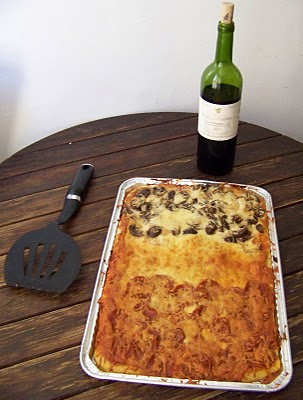 Although making it is quite fun, especially with my 4 years old messing around with everything, the waiting part is the part that I prefer, because that is usually when I open my wine fridge to choose a bottle of wine. I didn't know what to try, but a bottle of red Bergerac was taunting me.

Nestled in Dordogne, touching the eastern part of the Gironde department and often assimilated with Bordeaux, Bergerac is a misunderstood place. Quite well known from the Britts who refurbished and repopulated the area over the last 30 years, it is a place of peace and quiet, a lost treasure grove of history, stories and legends. Some counts the adventures of the first hunters, covering the wall of underground prehistoric cave (like Lascaux), and other make knights and dark creatures reappearing in the multiple scattered hilltop medieval villages and Châteaux surrounded by impenetrable forests where time seems to have stop and remain still since the 12th century.

Therefore, in my quest of always trying to introduce you to lesser known wines, regions and producers, I think that a Bergerac wine is very "à propos"!

Moreover, the Bergerac that I'm about to describe today is somewhat sentimental because it is the first Bergerac that I ever tasted when I was younger (around about 14 years old, not very American I know, it is the French side of me) and then, that I first visited in my early twenties, in 1997. It was also one of my first Bergerac wines that I sold to my customers when I was starting my career as young waiter-Sommelier in a Relais & Chateaux restaurant in Péssac, in the outskirt of Bordeaux. This close to my heart Bergerac winery has managed to keep up with the high quality of their wines and even after all these years remains one of my favorite top Bergerac producers.

Owned and run for the past 3 generations by the "De Conti" family, Château "Tour des Gendres" is the flagship of the Bergerac appellation.
Known since the 12th century as the winery of "Château de Bridoire", Château “Tour des Gendres” (literally “Tower of the sons in law” in English) is located on the site of an old Gallo-Roman villa. Referenced in the “Féret” of 1903, the Domaine gets its name from its then owner, Mr. de Peyronny, who was none other than the son in law of the Marquis de Foucault Lardimalie, lord of Bridoire. Destroyed by phylloxera in the early 19th century, the vineyard now covers only one-tenth of its original surface.

Originally from Italy, Vincenzo de Conti and his wife and children settled in the Southwest of France in 1925. In 1956, Primo de Conti, his son takes over the family farm with Michelle, his wife, who is raising a few horses. In the early 80's, belonging to the third generation, Jean de Conti, guided by his passion for the land and Luc de Conti, guided by his passion for horses, finally settled in Ribagnac (home of "Tour des Gendres"), a little village of Dordogne located about 12 kilometers south of Bergerac. For several years, with their wives, Carol and Martine, they carry out their projects separately.

In 1986, the “de Conti” brothers find themselves in a common project. They combined their properties, associated their families and created the “SCEA de Conti”, a company regrouping the family farm, lands and vineyards. After both families took over the vineyard and the farm lands, they restructured and improved them. Then tasks were divided and remain the same til today: Jean takes care of the farm grain and Luc of winemaking and wine marketing; Carol supports the accounting and Martine, the reception at the Domaine for guests and customers. Francis, the cousin, joined the operation in 1990, adding his 20 hectares of vineyards of “St. Julien d’Eymet” to the vineyards of “Domaine des Gendres” and of “Grand Caillou”. He took over the culture of the vine within the 3 Domaines now encompassing 52 hectares of vineyards.

Chronologically, here is what happen since Jean and Luc decided to regroup the Domaines:


The physico-chemical equilibrium of the earth, the exploitation of all layers of the soils and sub-soils, and the strength of the vines have naturally altered the taste of the wines: the alcohol level has lowered, the natural acidity has increased, the mineral character of the soil is more assertive on the red and white wines, tannins are riper and soft and the flavors are typical of their plot of origin. The persistence of these features perfect the style of the wines, these are qualities appreciated by wine lovers and easily recognizable during tasting.

Nature’s advocate and being raised as the grandson of a winemaker in a natural agricultural environment for the first 24 years of my life, I have always been very supportive of Organic, Biodynamic and other natural vinification processes and techniques. Many times, I wrote my views and opinions about them in some other posts.

However, writing about Domaine “Tour des Gendres” is particularly enjoyable for me, because I adhere totally to the philosophy and natural agricultural approach of the "de Conti" Family. And to confirm what myself and many more have said about Natural ways, here is once again facts about why everybody should be more aware and respectful of the Nature, with the words of Luc de Conti:

“By practicing organic farming, we raised a few secrets about the natural mechanisms, we realized that we were part of a whole, one and indivisible. Every day we see its benefits on our vineyards, our wines and our environment.” - Luc de Conti

Here are some of his own personal advices and keys (with a few of mine intermingled with them), which I respect tremendously and actively incite people to follow, regarding the complex mechanisms of organic (Biologique in French) farming and agriculture:


Their website is in French and I translated some of the above texts adding my personal touch on some of them, however Tour des Gendres produces 5 different labels coming in white and red (and rosés) and 1 sweet wine:
Therefore, I invite you to go visit their website for more info on the different cuvées at www.chateautourdesgendres.com 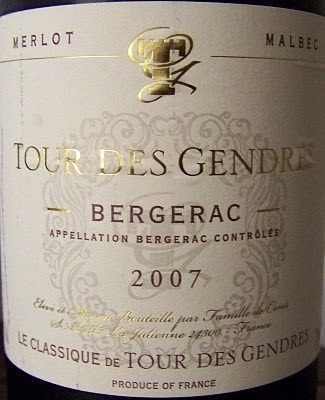 Tour des Gendres “Le Classique” Bergerac Rouge wine is a benchmark for Bergerac appellation. A well-structured, enjoyable and versatile red to enjoy at any occasion, preferably with local food from the Perigord. It represents the outstanding result of the work of talented winegrowers and an exceptional winemaker: Luc de Conti, often referred as “the Prince of Bergerac”. Considered as one of the best winemakers in France, Luc, his brother Jean and his cousin Francis, as well as their respective families, run this innovative Bergerac estate with upmost respect for the terroir and to the balance of the ecosystem.

2007 Tour des Gendres “Le Classique” Bergerac Rouge is a blend of 70% Malbec and 30% Merlot from south exposed vines planted on clayish soils resting on calcareous-limestone bedrock. After full destemming, the grapes were pressed then underwent a long fermentation of about 30 days immediately followed by the malolactic fermentation, both in stainless steel tanks and Bordeaux size oak barrels. The ageing process also occurred in both stainless steel tanks and oak barrels, with the wine resting on its lees to add richness, roundness, complexity and depth. It was finally bottled without fining or filtration to maximize and emphasize its lush, earthy, Terroir oriented profile.

2007 Tour des Gendres “Le Classique” Bergerac Rouge offers a dark ruby color; quite intense and opaque with just few, light ruby reflects near the rim. The nose is clean, somewhat delicate and discreet, yet definitely refine with aromas of ripe dark berries and dark fruit, light touch of eucalyptus, mint, spice, mineral, earth and smoke intermingled with profound and well integrated dark bitter chocolate and toasted oak nuances. The focus and dark palate is lush, rich and soft with well-balanced ripe dark juicy fruit flavors framed by a solid and present yet extremely well integrated, earthy tannic structure and enhancing acidity. The generous mid-palate is expanding with the same yet more expressive notes as in the nose. The textured finish is lingering and call for another glass.

This gorgeous Bergerac wine is as dark and appetizing as the black truffles (Tuber melanosporum), which grow exclusively within the oak roots and abound in the forest of the Périgord, enhancing further the already rich and flavorful local traditional food often prepared with Duck, Goose, Game, Venison, Wild Boar and Rabbit.

FYI: Périgord, which by the way gave its name to the eponymous truffles, is a former province of France, which corresponds roughly to the current Dordogne département (county), now forming the northern part of the Aquitaine region, in the southwest of France.

Info partly taken and edited from the winery website at www.chateautourdesgendres.com and from the importer website at www.baronfrancois.com
Step into the Green! Drink more Biodynamic, Biologique and Organic wines (and spirits and food) from sustainable culture and respect the environment! Support the right causes for the Planet and all the people suffering all around the globe! Also follow projects and products from the Fair Trade, an organized social movement and market-based approach that aims to help producers in developing countries obtain better trading conditions and promote sustainability. Also support 1% for the Planet, an alliance of businesses that donate at least 1% of their annual revenues to environmental organizations worldwide.
Posted by LeDomduVin at 2:11 PM