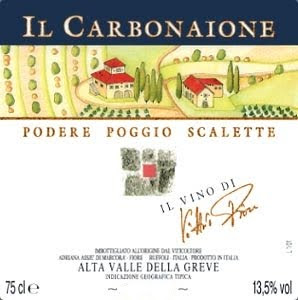 Poggio Scalette "Il Carbonaione" Alta Valle della Greve IGT Tuscany Italy
I first came across this very-hard-to-pronounce-for-a-French-guy wine strangely pronounced, or even butchered should I say, in my Franco-English with a twist of somewhat Italian accent way: "hill-carbo-na-yoneh", when I was a young Sommelier at Monte's Club (on Sloane street) in the late 90s back in London.

It was one of my first experiences with an IGT Tuscan wine and it happened to be one of the favorite wines of my Chef Sommelier at the time (blink of an eye to Tim McLaughlin-Green who taught me quite a few things and tricks about wine when he took me under his wing, before leaving the restaurant scene to run the "Sommelier's Choice Ltd", a small European boutique wines importer based in London). He corrected me every time I was trying to pronounce the name of this wine. It took me years to get it right. And here I'm again trying to get it out of my mouth: "Il Carbonaione".. (try it, you'll see...)

Established in 1991 in Greve (Chianti) and run by renowned Vittorio Fiore and his wife Adriana Assjè di Marcorà, Podere Poggio Scalette is a classic producer of rich and characteristic Tuscan wines.

The slopes of the Greve Valley are indisputably one of Italy's most ideal locations for the cultivation of vineyards and olive groves. The combination of exposure and soil composition contribute to the excellent quality of the wines and the extra virgin olive oils of the area. Named for the river that passes through as it travels from a medieval hilltop town, this area happens to be one of the most important historical centers of the Chianti Classico region.

Poggio Scalette takes its name from the landscape which is characterized by dry stone walls that support the terraces on which the vineyards and olive groves are planted. From a distance the impression is of a series of stairs climbing the slopes of Greve.

Located on the Ruffoli hill (Greve, Chianti), they bought several plots of land and a rural building from an inheritance division and disposal of several real estate pieces, including farm houses, vineyards, olive groves, pasture and woods, that had been neglected for years, since the death of the previous owner.

Initially this led to the establishment of a first nucleus of the Estate, to which, in 1996, another plot was added, following the purchase of the adjacent property, provided with working cellar and extensive buildings, bringing the Estate total area to about 40 hectares. Vittorio and Jurij Fiore, the oenologist-winemakers, produce quite a few wines that have been and remain great examples of excellent Tuscan wines.

On a large plot of terraced land named “IL CARBONAIONE” by local farmers, are planted Sangiovese vines that have been the first vines to be planted in 1920, the decade following the end of World War I (1914-1918) and the destruction of most of European vineyards between the end of 1800s up to the early 1930s by the devastating Philloxera. Thus, these vines, that have reached the venerable age of roughly 90 years, are, without doubt, one of the very rare – if not the only – examples of the famous “Sangiovese di Lamole” original clone presence inside the Chianti Classico territory.

"Il Carbonaione" is the culmination of knowledge and experience and therefore an important message of quality. Vittorio Fiore dedicated this wine to Tuscany and to Sangiovese; the region and the variety that have allowed him to fulfill his aspirations to produce the highest possible level of quality wine.

Therefore, "Il Carbonaione" is a unique and distinctive wine produced with 100% “Sangiovese Il Lamole” (a naturally low yielding clone of Sangiovese) from roughly 90 years old vines growing at about 450 meters above sea level (between 1.350 and 1.477 feet to be more precise), from vineyards oriented west-southwest and planted on sandy, silty soils very rich in fractionated stones.

During the vinification process, the maceration on the skin usually lasts for about 12 days with manual punch down to ensure greater extraction and concentration of the color, texture and especially flavors. The ageing/maturing process occurs for about 12-14 months in 350 liters Tonneaux (big French and American oak barrels larger than the usual 225 liters Bordeaux barrels or 228 liters Burgundy barrels and close to the 300 liters hogshead barrels used mainly in the new world, yet smaller than the large Slovenian “Foudres” of 18 to 25 hectoliters usually found in the northern part of Italy). The wine spent an additional 6 months in the bottle before release to attain perfect harmony and equilibrium. The resulting wine is a keeper that will remain vibrant and expressive for at least 8-12 years and more depending on the vintage.

The 2001 Poggio Scalette “Il Carboniaone” is surely one of my favorite and one of the best that I have tested from this estate, yet the 2001 vintage, like the 2004 and 2007, was excellent overall in Tuscany and in the Northern part of Italy as far as my taste buds are concerned.

It combines ripeness, freshness and balance in a convincing and inviting profile from the attack to the lingering finish. At first a bit shy yet still expressive, black berry, earthy, smoky aromas emanates from the glass. After a few swirls, it starts to show off some warmer notes of riper fruit and slight touch of forest floor and mineral. Boasting dark berry, earthy and mineral flavors slightly influenced by the oak treatment, the palate has a great structure and texture, balanced by a good amount of acidity that makes this wine fresher than I expected. In the seamless finish, the youthful tannins are present yet already fairly soft and integrated and suggesting that this wine may need another 5 to 10 years to really settle down and reach perfect harmony. Pair it with earthy and substantial food like game, venison, steak and cheeses.

Info taken partially and respectively from the importer website at www.winebow.com and from a PDF format about the wines produce by Poggio Scalette.

Step into the Green! Drink more Biodynamic and Organic wines (and food) from sustainable cultures and respect the environment!
Posted by LeDomduVin at 4:21 PM