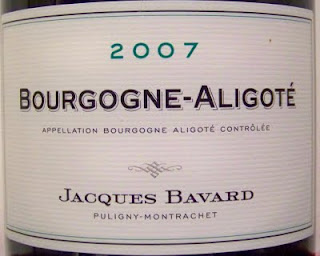 Discovering Jacques Bavard (starting with his 2007 Bourgogne Aligoté)
When Amy from Sherbrooke Cellars (a Wine Importer) came to visit me at the store a few days ago, she had a few bottles open and ask me if I had a few minutes to taste a few things (that's a lot of few). At first, I told her that unfortunately it wasn’t possible because I was really busy serving customers and doing other things in the store, but then again, as I always say: “Every wine deserves to be tasted, even if every wine shouldn’t be drunk!” So I said: “Ok, let’s go in the back and taste quickly” (I always say that but I can’t taste quickly; it is against my nature and my way of tasting and appreciating wine, even when I’m buying for the store... and I like to talk too…).

Amongst her bottles, the first white that really triggered my interest and waken my taste buds, was a simple Bourgogne Aligoté from Jacques Bavard.

Although, the Bavard family has been producing beautiful wines in Puligny Montrachet for more than 50 years, it is only during a recent trip to France, that the Sherbrooke team had the pleasure of discovering this wine and meeting Jacques Bavard (at Jacques’ old restaurant “Au Bourguignon du Marais”) and started to import his wines to the US. When they discovered that the elegant, minerally Puligny he was pouring (at the restaurant) was his own, they convinced him that his wine should NO LONGER be a secret to the U.S. Jacques’ focus is now 100% on his family vineyards in Puligny Montrachet and his inaugural vintage in the U.S. was the 2005 (nice start)!

To come back to his Bourgogne Aligoté, when I said simple, it was on the contrary rather complex, balanced and long, with a twist of Puligny Montrachet in the profile. Weird!

However, this Bourgogne Aligoté from Jacques Bavard was also fresh, crisp and racy yet it had an extra dimension and more depth. It showed more minerality, more roundness and viscosity but also a creamier mouth-feel than most of its cousins from other producers that I had the chance to taste recently.

Amy mentioned that it had may be something to do with its place of origin or the fact that the Domaine is located in Puligny Montrachet, or, I was thinking, that may be it is a winemaker style and that Jacques Bavard makes all of his wine with a slight twist of Puligny resemblance and attitude in their profile. I’m not so sure if it was my imagination or the fact that I was may be slightly influenced by the words “Puligny Montrachet” written just below the producer’s name on the minimalistic yet classic and elegant label, but this wine had something that reminded me of it.

However, “Bavard” in French can literally be translated by “talkative” or “talking a lot”, and his Bourgogne Aligoté had a lot to say, it was literally talking to me as I swallowed it instead of spitting it as I normally do during tastings (it is another natural part of me, if the wine is good, I do not need to comment on it much, I usually just swallow it, it says it all).

Previously restaurateurs in Paris, Jacques Bavard and his wife Christine, who used to own “Au Bourguignon du Marais”, a great little restaurant that they ran for about 20 years, have been totally devoted to their small family run estate of 1.5 hectares located in the village of Puligny Montrachet since 2004.

Jacques farms all his wines organically with biodynamic approach, with minimal intervention and manual batonnage to clean the wine in order to maximize the natural flavors. Some of the wines are aged for 12-18 months (depending of the need of the wine) in oak barrel with only 5% new.

He also holds long term contracts with other producers that share his same philosophy in order to increase his production by another 1.5 hectares (approximately), so consequently does a bit of a Negociant job. All together his production is about 15000 to 17000 bottles a year of which 90% are sold for the export market (barely none left for the local French market), divided into several white and red wines made with Aligoté, Chardonnay and Pinot Noir:

Probably due to his personality and his 20 years as a restaurateur, Jacques Bavard is known as a welcoming and kind winemaker. I usually like to think that most wine often reflects the character and the personality of the winemaker, well once again, although I never met Jacques, I’m sure that his reputation preceded him with this wine. The least that I can say is that now I’m eager to taste the rest of his portfolio, it appears to be promising, especially with an Aligoté that good and knowing that the 2007 vintage is only his 3rd harvest since he invested himself fully in this project.

Light straw colored in the glass with bright golden reflects and an almost transparent edge around the rim of the glass. Inviting scents of white stone fruits, lemon and white blossom notes and wet stone minerality hints compose the elegantly expressive nose. The balanced and well-rounded palate is light yet fleshy with a certain unusual weight for an Aligoté, and offers distinct expression of white fruits, lemon zest and lot of minerality that add a sense of purity to this wine. This white has great natural acidity that really sets off the green apple and creamy white peach quality on the finish. Great on its own, it is packed with more than enough elegance, weight and gently-coating-the-palate creaminess and viscosity to serve with grilled river fish, seared scallops and even roast chicken. What a wine! I love it! This is probably one of the most surprising and enjoyable Bourgogne Aligoté I ever had so far. A must have!

Info partly taken and edited from the importer website at www.sherbrookecellars.com

Step into the Green! Drink more Biodynamic and Organic wines (and Food) from sustainable culture and respect the environment!
Posted by LeDomduVin at 11:13 PM