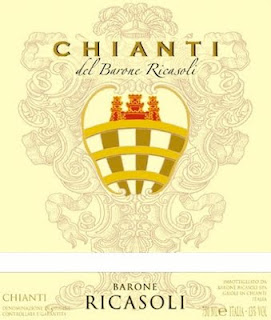 2006 Ricasoli Chianti del Barone Tuscany Italy
Ricasoli has roots that can be traced back to the 7th century; however the most important part of their story began in the 17th century and expanded even more in the 19th and 20th century. In fact, for the past 10 consecutive centuries, the property and management of Castello di Brolio, home of the Ricasoli family, has always been maintained by the Ricasoli.

In 1993, Francseco Ricasoli took over control over his family’s business and embarked on his project of the complete renovation of the entire estate. Nowadays, the estate is one of the most recognizable estates in Chianti due to its majestic yet somewhat austere medieval castle on a hilltop. It is also one of the leading wineries of this region and their Castello di Brolio Chianti rivals some of the best Chiantis from more notorious producers.

In 2006, winter lasted until March. April and May were rainy and the summer showed moderate temperatures and limited rainfall. However, on 20 August the weather changed abruptly and the last 10 days of the month were hot and sunny. This trend continued into September and the first half of October and was characterized by temperatures that varied by more than 10/15 degrees between the scorching days and cool nights. In our opinion, the 2006 vintage is the best to come out of the last 15 years. It displays superb aromatic complexity, good alcohol content and excellent polyphenolic structure.

Although quite good and well made yet not so complex or extravagant, Chianti del Barone is basically the entry level of the Ricasoli winery which produces quite a few different labels. The 2006 is made mostly of Sangiovese grapes. Following a fermentation period of 8-10 days, the wine was aged 80% in stainless steel tanks to keep the maximum of fruitiness and freshness, and 20% in oak barrels (two-thirds new) and 900 liters oak cask, to add volume and depth without imparting the taste with heavy oaky notes. It was then bottled in May 2007.

2006 Ricasoli Chianti del Barone is a charming, light, easy going Chianti with fresh red fruit flavors and inviting attitude. Behind its fairly intense ruby red color with purple reflects, the expressive and gentle nose liberates elegant violet notes intermingled with fresh red berries. The palate, although not too complex yet quite juicy, is also soft and voluptuous, with great acidity, earthy undertones and good tannins. A friendly, well crafted Chianti to pair with anything from pasta to pizza and cheeses.

Info taken from the friendly and informative website of the winery at www.ricasoli.it

Step into the Green! Drink more Biodynamic and Organic wines (and food) from sustainable cultures and respect the environment!
Posted by LeDomduVin at 12:22 PM