Produttori del Barbaresco wines are now classics amongst the wines that I buy from VIAS nearly every year. We just received cases of three out of their 9 single vineyard Barbaresco(s) in the 2004 vintage that represent some of the benchmarks of the Barbaresco appellation, and we still have some bottles of the 2001 vintage, both vintages are excellent and age worthy in Piedmont.

For Produttori del Barbaresco, it all started in 1894 with Domizio Cavazza, who realized the uniqueness of the Nebbiolo grape growing on the hills of Barbaresco. He gathered a few producers and created one of the first cooperatives to produce Barbaresco, called “Cantine Sociali”. The Cantine was closed in the 20’s for political reasons forcing the small growers to sell their wines in bulk to complement Barolo’s wines and to make Piedmont table wines.

In 1958, recognizing that the only way the small properties could survive was by again joining their efforts, the priest of the village of Barbaresco gathered together nineteen small growers and founded the Produttori del Barbaresco. The first three vintages were made in the church basement, then in the winery built across the square where the cellar of Produttori del Barbaresco is still located.

Reunited once again after being separated during the fascist regime in the 20’s, the small growers continued the work started and inspired by Domizio Cavazza in 1894, producing only Barbaresco wines and enhancing both the reputation of the wines and the village. The proud past of Barbaresco and the dedication of its creators have made Produttori one of the greatest producers of this renowned Piedmont area.

Produttori del Barbaresco, founded in 1958, now has 56 members and 100 hectares (250 acres) of Nebbiolo vineyards in the Barbaresco appellation, which is almost 1/6 of the vineyards of the area. Each family is in full control of its land, growing Nebbiolo grapes with experienced skill and dedication acquired over the last 100 years of winemaking. The winery produces high quality Barbaresco D.O.C.G. wines, from a blend of Nebbiolo grapes harvested in different vineyards, and a simpler Nebbiolo Langhe suited for earlier consumption. 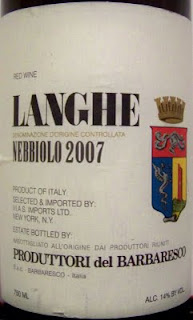 Langhe Nebbiolo is produced every year; it ranges from 10 to 30% of the total production depending on the quality of the vintage (the better the vintage the less Nebbiolo is produced). It is somewhat a second label for Produttori del Barbaresco and it is made with the grapes from young vines or vineyards that produced less intense and concentrated juice. It does have the quality standard to be a Barbaresco, but the winery declassifies it and sells it to maintain the Barbaresco(s) complexity and quality as high as possible.

The result is an extraordinarily balanced, concentrated, juicy and harmonious wine with refreshing acidity that carries the fruit through the finish and adds brightness to the wine. The nose boasts intense wild berries and red cherry aromas with earthy, floral and mineral notes. The youthful palate is fresh, dense yet medium bodied and juicy. It combines, here again, earthy, floral and mineral notes intermingled with red and dark berries, liquorice and slightly yet integrated oaky flavors lingering for a while in the silky finish. Very approachable now, this wine may benefit from 2-4 years cellaring.

The 2007 vintage has been a success and I even wonder how I didn’t write something about it earlier. Due to the excellent quality of the 2007 vintage in Piedmont, if I was you, I will hurry up to find the last few remaining bottles that you can find. Pair this 2007 Langhe Nebbiolo with rosemary-flavored roasted lamb, garlic and parsley sautéed mushrooms.

Step into the Green! Drink more Biodynamic and Organic wines (and food) from sustainable culture and respect the environment!
Posted by LeDomduVin at 9:09 PM