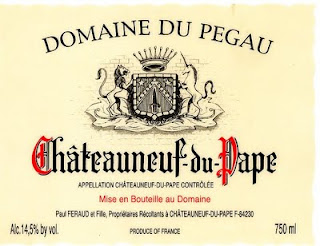 Domaine de Pegau
Domaine de Pegau has a long family tradition of growers that can be trace back to the 17th century and is one of the benchmarks of the Chateauneuf-du-Pape appellation.

The great grandparents of Paul Feraud expanded the Domaine Feraud (as it was known before it became Pegau) to 22 hectares.

In 1964, Paul decided to produce his own wine from selected 5 hectares of vineyards and bottle it at the property; the remaining wine was sold in bulk to Negociants. A new Chapter opened when Laurence the daughter of Paul and wife Odette, having finished her wine studies came back to work with her father.

In 1987, the Domaine Pegau was created to associate the experience and respective talents of father and daughter. The family tradition of winegrowers and winemakers will be ensured by Laurence and her husband Mark and their two children Maxim and Justine (names that already adorn the bottles of two private prestige Cuvees).

They now craft several earthy, balanced, generous and expressive wines, from the Chateauneuf-du-Pape appellation (and Cotes du Rhone), divided in 11 vineyards within the appellation which contribute to the diversity of taste, personality and character of each of their wines.

“Pegau” is an Old Provencal word from the “Langue d’Oc” (the ancient language spoken in the south and southeastern part of France which gave its name the vast region of Languedoc), which was the name of ancient wine jugs excavated from the old 14th century Pope palace in Avignon.

Like the “Cuvee Reservee”, “Cuvee Laurence” is the flagship cuvee of Domaine de Pegau, aged for 18-24 months (and up) in old “foudre” (big oak vats).

The 2004 “Cuvee Laurence” offers great, expressive earthy aromas of cassis, black cherry, lavender, wild herb with hints of earth, black currant and ripe fig. In the palate, this refined, charismatic, young wine is earthy, rich, robust yet delightful and balanced, with a very good tannic structure that will need a bit of time to settle down. The garrigues, pot pourri, earthy profile linger in the long, structured finish. It is a keeper that will evolve slowly and open nicely within the next few years. If you can’t wait decant it and wait for it for at least 30-45 minutes.

For more info about this winery go to their website at www.pegau.com

Step into the Green! Drink more Biodynamic and Organic wines (and Food) from sustainable cultures and respect the environment!
Posted by LeDomduVin at 5:31 PM