Wow! It has been a very hot lately; somehow too hot for the season in my opinion, which will surely provoke massive drought for the next 4-5 months, if temperatures continue to rise like that. It is already happening in western Europe and certain US states.

New Yorkers, you know what it means, everybody is going to crank up all available air-conditioner; therefore the town is going to humid because of the dripping in the street and the evaporation in the air, but also suffocating and polluted because of the rising temperatures, the hot and humid air rejected by the air conditioners and the gas from all vehicles, plus the smell from the trash in the street: i.e. “Welcome to the summer in New York city!”

However, let’s think positive and appreciate the other things the Big Apple has to offer: loads of tourist, concerts in the park, BBQ in the garden or on the roof top, and plenty more, but more importantly cold drink like beers, white and rose wines but also chillable, friendly and versatile reds like Beaujolais.


Domaine Joseph Chamonard
Having lived and worked amongst the “superstars” of Beaujolais, most of them his friends and neighbors, Joseph Chamonard had created a wonderful environment for his wines in Morgon, crafting traditional, earthy and hearty wines with great skills and attention. He practiced biodynamic/organic farming at some of its earliest mentions and only followed natural processes in the cellar. His “Clos de Lys” benefited for the unique community that shared and assisted each other for the forward progress of wine itself, if not for Gamay as a recognized noble varietal.

On the hill of Morgon, his vines stayed healthy without chemical or fertilized assistance and rested in living soils. They remain that way today, alongside the packed earth and starved vines of the neighbor’s only steps away.

Sadly, Joseph passed away in 1990, leaving his daughter Geneviève (and husband, Jean-Claude Chanudet) to carry on with the production and maintain the health of his 4-hectare parcels. Both have carried this mission through with each successive vintage since then, allowing for his name and his wines to perdure to these days.

There are no chemical treatments, in or out of the vineyards. Harvest is done by hand, late in the season to obtain full natural ripeness and complexity. Only natural yeasts are used to start fermentations. And little is done along the process other than patient guidance to its natural end. It is wine made the traditional way with respect to nature.   As some of the others of his era have recently passed on as well (Marcel Lapierre in 2010), there is a sense that the pattern set here in Beaujolais will be altered. With so much natural beauty remaining though, it will take more than a gang of four to do so. Afterall, it is now almost tradition. 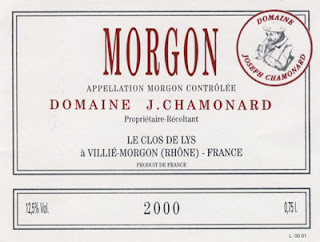 Three decades ago, Joseph Chamonard was a recognized Beaujolais producer part of a group of friends, amongst some of the best Beaujolais’ producers, including late Marcel Lapierre, Guy Breton, Jean-Paul Thévenet, Jean Foillard, and their mentor late Jules Chauvet. Unfortunately, Joseph Chamonard died in 1990. His daughter Geneviève, helped by her husband Jean-Claude Chanudet, continued making supple and fruit forward Beaujolais wine in the same old traditional way, walking in the steps of her father with combined Biodynamic-organic methods and respect for the natural environment. Recently imported by Savio Soares in New York, Chamonard’s wines were barely distributed outside of the local market and were apparently difficult to find even in Paris. Now available in New York, Chamonard’s wines feature on the selection of some of the most established wine boutiques and restaurants, with one of the most expressive Morgon available in the New York market.

The 2009 vintage has become a true classic in Beaujolais, and the 2009 Chamonard Morgon reveals the high quality of the vintage and the ripeness of the fruit topped with an attractive Terroir driven attitude. The nose is very fragrant, with straightforward aromas of light cherry and raspberry, and earthy notes. Light to medium in body, the wine is perfectly balanced between full fruit and lively acidity, with an earthy touch on the finish. Long, robust, a touch rustic yet so structured, ample and complex, this wine possesses the richness characteristic of the village of Morgon wines and great ageing potential. A bit tight just after opening, it needs at least 30 minutes of aeration or even decanting to fully express all its nuances.

I have really enjoyed the last 3 vintages (2006, 07 and 08) and need to admit that the 2009 vintage is the one that reveals the most fruit, ripeness and length. In my opinion, I just bought more Beaujolais (from diverse producers) from this exceptional vintage and, if I may, I will certainly encourage you to do the same before the vintage runs out. However, if you can’t, it seems that 2010 shouldn’t be so bad either.

Most info partly taken and partially edited from the importer website at http://savioselections.com

Step into the Green! Drink more Biodynamic, Biologique and Organic wines and spirits and food) from sustainable culture and respect the environment! Support the right causes for the Planet and all the people suffering all around the globe! Also follow projects and products from the Fair Trade, an organized social movement and market-based approach that aims to help producers in developing countries obtain better trading conditions and promote sustainability. Also support 1% for the Planet, an alliance of businesses that donate at least 1% of their annual revenues to environmental organizations worldwide. "Commerce Equitable" or "Fair Trade" is evidently and more than ever a needed movement connecting producers and customers, to be aware of others and their cultural and traditional products based on high quality, natural components and craftsmanship.
Posted by LeDomduVin at 1:47 AM