Who hasn’t read or taste or heard of Bonny Doon, or Randall Grahm the mad genius behind it, is in my opinion not a wine connoisseur! You didn’t? Well let me tell you how I first encountered his wines.

It happened 14 years ago, when I was a young Sommelier in London. I was working in high standards private club that had one the best wine list that I can remember seeing in a restaurant. Despite all the best names and quite a few of the best vintages from France, Italy, Spain, Portugal, Germany, Australia and New Zealand, the wine list included some of the best wines from the US available in the Kingdom. And guess what? Bonny Doon Cigar Volant was part of it, but at the time I wasn’t acquainted at all with this wine or the man who produces it.

The wine, adorned an intriguing old world old fashion label, representing a long ovoid shape floating above a wine estate with a ray of red light descending on the house and its surrounding vineyards; hence its name of “Cigar Volant” in reference of a flying soccer story.

The wine had similar character to a Rhone wine, yet it was made in California and adorned riper fruit yet nearly identical earthy and Terroir oriented traits. The wine was first produced in 1984 and was released in 1986, a blend of Grenache, Mourvedre, Syrah, Carignan and Cinsault, it was an homage to Châteauneuf-du-Pape wines and the confirmation of Randall Grahm as an excellent winemaker, the start of a long story. And the rest is history.

This strict three-year process eliminates all chemical fertilizers, pesticides, herbicides, hormones, fumigants and GMOs from the vineyard. Instead, traditional green vineyard practices such as composting, manuring, and the use of biodynamic preps, sprays and teas are employed to achieve a healthy level of soil and crop fertility in the growing environment.

Randall noted that, “Biodynamic growing practices are not old wives’ tales or marketing flim-flam. These practices respect and heal the vineyard and, by extension, the earth. While it may not be the only way to grow great wine, I do, in fact believe that it is the royal road to terroir.”

In 2003, Randall set a goal to make wines reflective of their specific place of origin: “We have seen quite astonishing improvements in wine quality since we began this process. Demeter’s certification of our Ca’ del Solo vineyard and its wines bring Bonny Doon closer to their long-term goal of only producing 100% estate grown biodynamic wine.”

Randall Grahm is a vitizen of the world, a champion of the strange and the heterodox, of the ugly duckling grape varietals whose very existence is threatened by the dominant Cabo- and Chardocentric paradigms.  He lives in Santa Cruz with his muse Chinshu, their daughter Amélie and his thesaurus.

He makes about 15+ different wines from various grapes and viticultural regions of California. One of his many and latest creations that I enjoyed lately is his Albarino.

Galicia, the Iberian playpen of albariño, loureiro and treixadura, could not be more different than Soledad, yet these varieties seem to be enjoying their extended siesta in the Salinas Valley. Where the Galician coast typically sees fifty inches of rainfall per year, Soledad is lucky to receive one-fifth that amount. A little fine-tuning of the viticultural practices however has been very successful.

We have found that allowing a tad more shade on these Iberian varieties somehow mimics the Iberian climate and produces grapes with thinner skins – and thus lower phenolics – preserving delicate aromatics and finesse. This wine expresses a beautifully crystalline mineral aspect, great persistence on the palate, and a bracingly crisp, grapefruit, yuzu and tangerine dream. It is the perfect aperitif and wildly successful with Asian food or shellfish, the traditional Galician accompaniment.

The vineyard in Soledad is located on the east side of the Salinas Valley at the base of Gabilan Mountain Range. The total planted area is 135 acres on a 160-acre parcel. It is the last area of cultivation one encounters moving east up the slope of the range. As such, it slopes modestly – 5-10% – particularly on the eastern third of the parcel. The majority of the land is composed of Chualar and Danville Sandy Clay Loam soil series – deep, well drained soils formed on alluvium fans of decomposed granite.

A quick look on a map might lead one to believe this area is much hotter than is actually the case. This area is regularly visited by morning fog. While the wind does have a detailed case history of rendering the locals psychotic, it would do the Mistral proud. The climate is dry-as-a-bone to boot, seeing a bare 8” of rain per year. It is all in all a fairly low-vigor site which benefits markedly from progressive viticultural practices.

Bonny Doon began farming this vineyard biodynamically in early 2004. The degree and vitality of microbial and other life has increased dramatically in the soil in the past three years. Randall hypothesizes that, as a result, there is a much more complex spectrum of bio-available compounds for much healthier root systems to access. 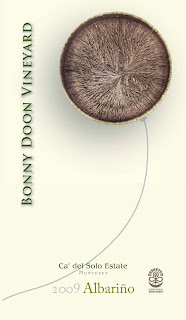 This rich Albariño, sourced from biodynamically grown grapes in the cool climate region of Monterey, is made with minimal intervention but a lot of care and attention, like all Randall wines. The nose opens with a beautiful note of honey, unfolding to reveal aromas of apricots, lemon blossoms and herbs. Clean mineral flavors on the palate give way to a plump, rich fruit in the midpalate that is balanced by bright, zippy acidity. This Albariño is a bit bit more gutsy than its Spanish couterpart, but Galicia wine lovers will definitely recognize similar attitude and structure, even if the fruit is a bit riper. Very well crafted, refreshing and racy, it will pair pleasantly with shellfish, grilled fish and Asian cuisine.

Step into the Green! Drink more Biodynamic, Biologique and Organic wines and spirits and food) from sustainable culture and respect the environment! Support the right causes for the Planet and all the people suffering all around the globe! Also follow projects and products from the Fair Trade, an organized social movement and market-based approach that aims to help producers in developing countries obtain better trading conditions and promote sustainability. Also support 1% for the Planet, an alliance of businesses that donate at least 1% of their annual revenues to environmental organizations worldwide. "Commerce Equitable" or "Fair Trade" is evidently and more than ever a needed movement connecting producers and customers, to be aware of others and their cultural and traditional products based on high quality, natural components and craftsmanship.
Posted by LeDomduVin at 1:22 PM