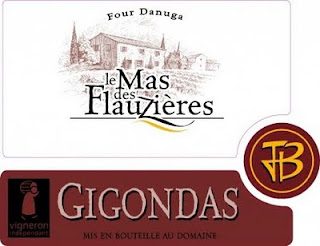 2006 Mas des Flauzières Gigondas "Four Danuga" Southern Rhone Valley France
Belonging to the Entrechaux castle in the Middle Ages, “Le Mas des Flauzieres” is an old barn located at the foot of the Mont Ventoux, a distinguished mount locally called “the Giant of Provence” in the southern Rhone valley, near the small town of Vaison La Romaine.

Although it has been owned by the Benoit family since the end of the nineteenth century, it is not until recently that the Domaine experienced a renaissance and started to feel a new wind of changes.

Jérôme Benoit, the son, on completion of his studies in agronomy and enology, decided to create his winemaking cellar and has been marketing his wines since 2002, under the “Vigneron Independent” label which is (in general) a very good reference for great, small and rather unknown producers crafting natural and Terroir oriented value wines.

The property various vineyards extend over several villages from Mont Ventoux to the protected site of Dentelles de Montmirail, allowing Jérôme to produce wines from different appellations. This rare advantage of finding within the same family domain several wines from various soils and appellations, will take you on wine journey in the Rhone valley from their fruity, lively Côtes du Ventoux to the great and vigorous vintages of the universally known Gigondas.

Not far from Chateauneuf-du-Pape, Gigondas produces great earthy reds made with the same grape varieties. Although less rich or complex than their counterpart, they are a good alternative and usually a better value than its neighbors.

Mostly at the foot of Mont Ventoux, their vineyards, located on the slopes of the Ouvèze valley and planted on sandy and stony grounds, regroup approximately 70% Cinsault (20 years old) and 30% Syrah (20 years old).

Mas de Flauzieres produces quite a few wines from several identified-on-the-label parcels and vineyards (or Lieu-dits), here they are by appellation and increasing respective quality:

2006 Mas des Flauzieres Gigondas « Four Danuga » is a nice value and a very accessible Gigondas. A blend of Grenache, Syrah and a touch of Mouvedre, it is clean and light in the mouth, with notes of plum, spice, earth and smoke mingling on the palate before a pleasant, round and earthy finish. Try pairing this food-friendly red with red meat, cheeses or spicy foods.

Step into the Green! Drink more Biodynamic and Organic wines (and Food) from sustainable cultures and respect the environment!
Posted by LeDomduVin at 1:44 PM